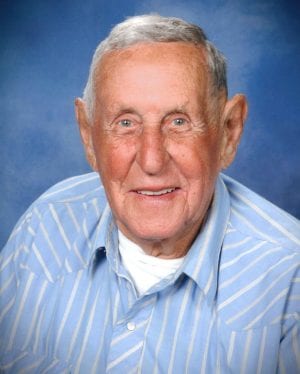 Edward Paul Witt, age 90, of Metamora, Ohio, passed away peacefully, surrounded by his loving family, Tuesday morning,  September 20, 2016, at Ebeid Hospice in Sylvania . He was born July 2, 1926 in Adrian, Michigan to Francis Xavier and Elizabeth (Dickerson) Witt.  Edward worked for the Jeep Corporation for 40 years, retiring in 1991.

A devout Catholic, Edward was a  member of Holy Trinity Catholic Parish in Assumption. His daily routine was reading the newspaper and drinking coffee. He cut and sold wood and loved his cats.  On a nice day, you would often find Edward sitting outdoors in his chair near the road greeting all the passersby’s coming in and out of town with a friendly wave and a genuine smile. That will be greatly missed by many!

Edward was preceded in death by his parents; his daughter, Sue McLaughlin; sisters, Mary Miller and Helen Franklin; and brothers, James, Charles, Robert and Raymond Witt.

Family and friends may visit Friday, September 23rd, from 2 to 8 p.m. at the Weigel Funeral Home in Metamora (419.644.3601), where a Vigil service will be held at 7:00 p.m.  Prayers will begin in the funeral home at 11:30 a.m. on Saturday, September 24th, followed by a Mass of Resurrection at 12:00 p.m. (Noon) at Holy Trinity Catholic Church in Assumption, with Fr. Michael Dandurand presiding.  Interment will follow at St. Mary’s Cemetery.

Memorial contributions may be made to Holy Trinity Church.

Online expressions of sympathy may be made at weigelfuneralhomes.com