Entertainment Venue Planned For Near Delta In Fulton County 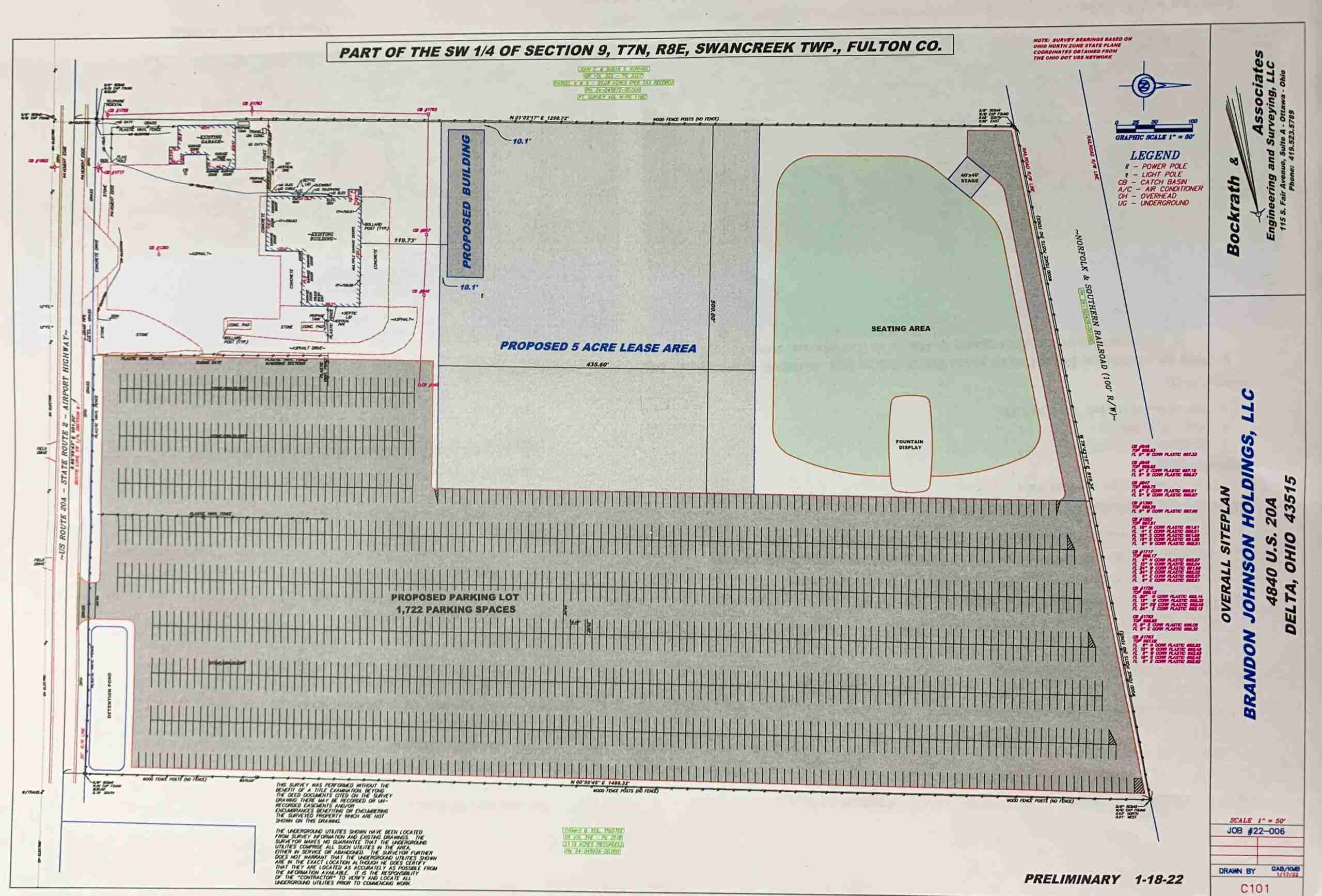 PRELIMINARY SITE PLAN … The preliminary site plan for the new concert venue is shown. The plan shows the concert area, parking lot, stage, and a 5-acre proposed land lease area. The company, Team Johnson, is hoping to have the work done and ready for shows this summer. (PHOTO PROVIDED)

The Team Johnson Company, located at 4840 US 20A in Delta, has big plans for its location. Those plans include the jumpstarting of tourism into the area by bringing in top rated entertainment.

Top rated entertainment like Kid Rock, Drift Racing, Monster Trucks, Mud Bogging, and more are all being discussed as possible shows that may be available there soon.

Passing by the location now will not give you a sense of huge concerts or drift racing. However, a plan is now in motion for that to all change and soon.

The project was scheduled to start breaking ground recently on January 24th but was postponed due to the snowy conditions.

When construction does begin, it will work to create a 30-acre concert venue, with a 40×40 permanent stage, that will be capable of serving 10,000 to 15,000 people. A parking lot will also be onsite and will have the capacity for 1,722 cars.

This is a big deal for a place like Fulton County since other entertainment complex’s close to our area, such as the Huntington Center and Stranahan Theater, are unable to fit in so many visitors.

Even the Mud Hens Stadium in Toledo only has an official capacity of 10,300 with 8,943 of those being able to be seated. The venue will also have a nice look to it with plans including a fountain display and lighting.

According to owner Brandon Johnson, work is being done with some of the biggest producers in our area and there is a lot of excitement.

Brain storming is also being done for the type of events that could be brought into the area in order to make it as well-rounded as possible.

Music festivals, comedians, battle of the bands and an America’s Got Talent like event, but with local talents. All of the above is possible and being explored by Team Johnson.

Mr. Johnson stated that a company has already reached out to look at the possibility of including a drift racetrack in the work being done.

Local events will also be given the opportunity to rent out the space to hold events as needed.

With all the excitement around bringing in Kid Rock, drift racing, monster trucks and more. It is important to note that nothing has yet been set into stone.

The hope is for the venue to be complete and ready to accept shows and visitors this summer. However, work is still being done with producers, promotors and other entities to bring the entertainment to the venue.

As of right now, Team Johnson is trying to get Kid Rock to come and perform in the area, but nothing is final yet. Drift Racing is also a possibility, but again, nothing is final.

What can be seen however, is that this venue should provide a large amount of tourism for the county while also giving everyone another choice for entertainment, without having to go so far away.