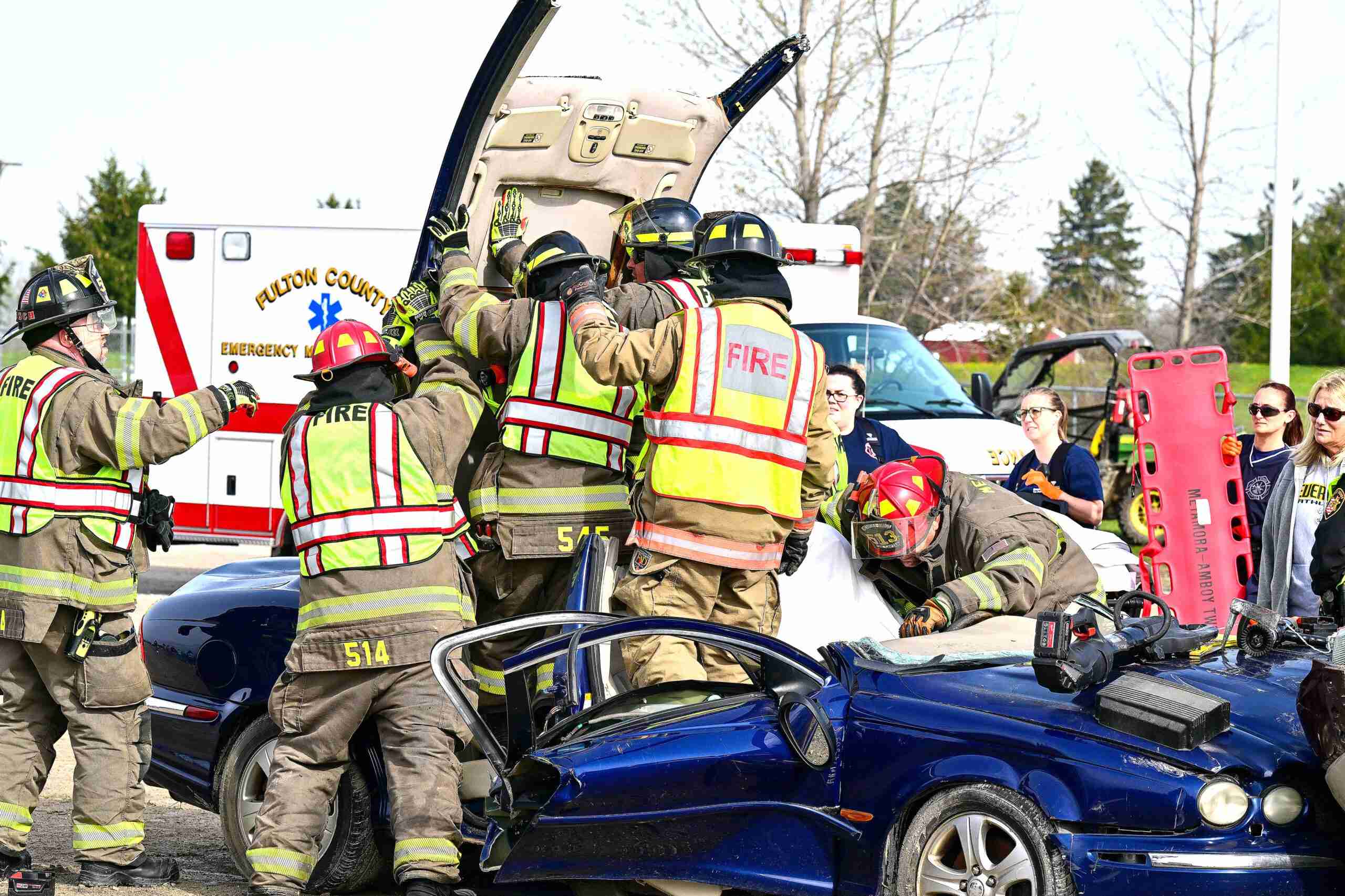 ROOF LIFT … Firefighters work to lift the roof of the blue vehicle so the deceased patient can be removed. (PHOTO BY JACOB KESSLER, STAFF)

The Evergreen High School held a mock crash on school grounds for the 11th and 12th grade students. The mock crash, is normally held at schools to put the dangers of driving distracted, under the influence and more, into perspective before prom.

Students were able to sit and experience an accident scene from beginning to end with conditions being artificially made as real as possible under the circumstances.

A student, Ahrianna McCabe, played the witness of the accident who called 911. From there a narration took place of what all was happening behind the scenes while 911 dispatchers page out fire and rescue personnel to the scene.

The accident scene consisted of two vehicles, a blue car and a maroon SUV, that had hit head on. These vehicles were previously involved in a real accident but were rendered safe for this exercise.

Inside both vehicles were two students who played the part of injured drivers and passengers.

First on scene was Metamora Fire Chief Jessica Geer. Immediately Chief Geer initiated what is called a scene size up of the incident in order to determine the scope of what took place, and what if any additional resources she may need.

Numerous units from Metamora at this point were already on their way, which were responding with lights and sirens from their station in order to add to the incident’s realism.

An Air Ambulance from Life Flight was requested as well as a crew from Lyons to create a landing zone, and an ambulance from Richfield.

Getting these resources to the scene takes time which was made apparent to the students when the time was said through speakers of how long the incident had already been going on for.

By the time rescue and fire personnel arrived on the scene, triage began with patients being helped.

Extrication of some patients from the vehicles also took place which also took time. Another student also played the part of a friend who was on scene and wanted to help but was unable to.

Life Flight landed at the scene and began to treat their patient before later lifting off. After all other living patients were helped, it was time to extract the driver of the blue car whose mother had recently arrived on scene.

Extraction was performed by firefighters who had to cut the posts at the front of the car, lift the roof and remove the door in order to gain access to the deceased patient.

The driver of the SUV, Walker Lumbrezer, was also arrested by Fulton County Sheriff Deputies at the end to show what can happen with distracted driving. Before the mock crash ended, a story was read from the perspective of the dead driver.

In total, from the start of the incident to when the deceased patient was removed took around fifty minutes.

The hope of first responders, parents and school teachers is that this mock crash and others like them will help to reduce negative behavior while driving during prom, and at other times as well.

Firefighters and EMS performed no differently during the crash than they would have at a real rescue. It was a true representation of what can happen in a crash, although with much less consequences than in real life.