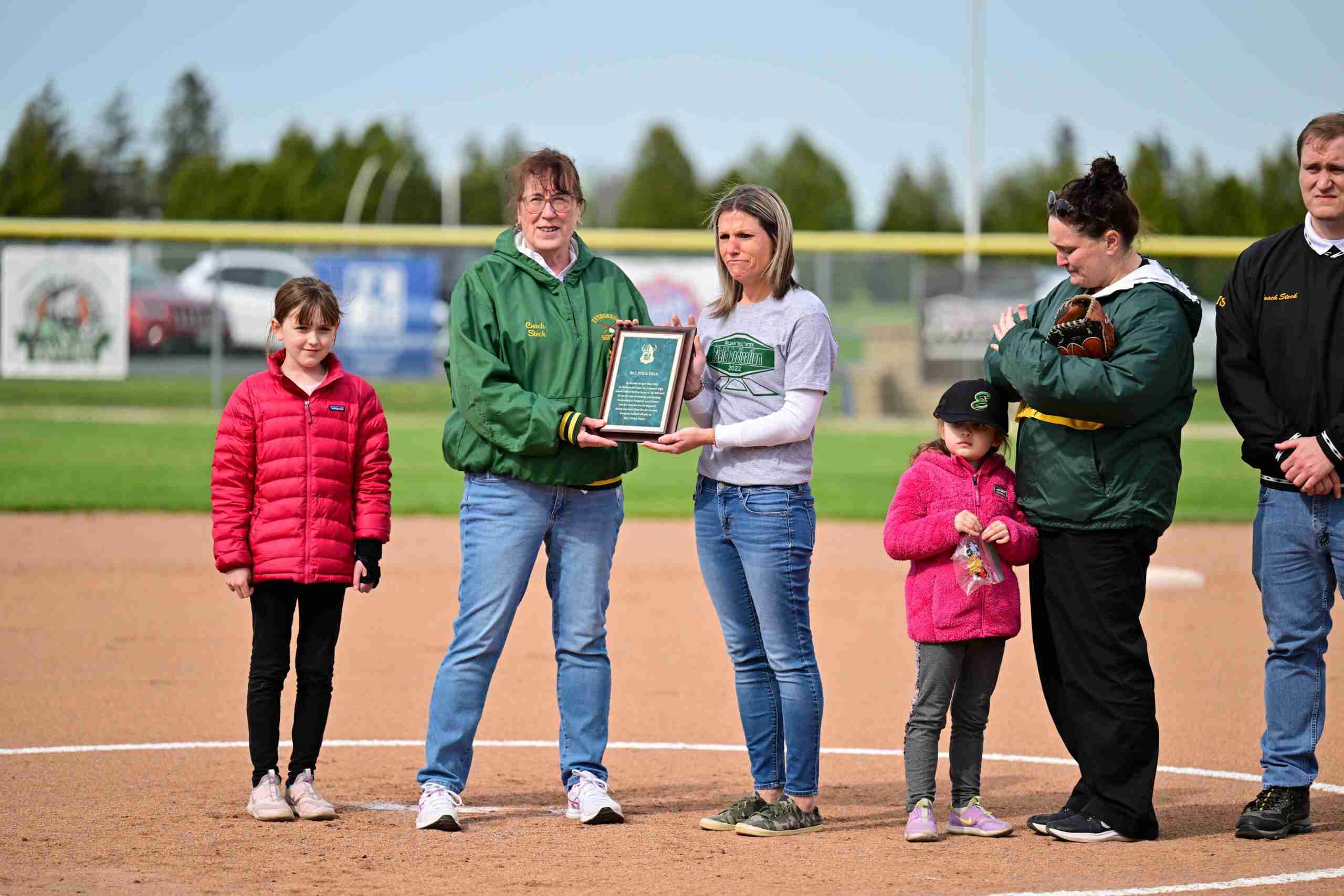 DEDICATION … Coach Bill Steck was honored with the Evergreen Softball field being dedicated and named after him. There to receive the honor in his stead was his wife Carol, daughter Ann, son Matt and his grandchildren. (PHOTO BY JACOB KESSLER, STAFF)

The Evergreen Softball Field is now known as Bill Steck Field. The field was dedicated on Thursday, April 28th at 4:45 p.m. before the game vs Delta.

During the dedication, Bill’s wife Carol, daughter Ann, son Matt and his grandchildren took to the field and received the dedication plaque before the cover was pulled down from the new sign showing the fields name.

Following the dedication, Carol Steck and one of her granddaughters also threw the first pitch to open the game.

Steck is a legend in the Evergreen Community. Even without his record with coaching, Steck taught at Evergreen for 40 years as a science and PE/Health teacher before retiring.

Adding his coaching record back in and it gets impressive with Steck being the only known coach in the state of Ohio to ever take both a baseball team and a softball team from the same school to the Elite 8.

He went on to lead the softball team to league titles, sectional championships, a district title and again, an Elite 8 appearance.

In addition to coaching baseball and softball, Steck was on the sidelines for both the boys’ and girls’ basketball teams and was also the defensive coordinator for the football team. He was even the school’s athletic director for a time.

Steck lived for athletics and helping players grow in the game to become great players. He continued with sports as the NWOAL assistant commissioner and league official assignor for girls sports up to his passing.

While Steck was not able to be here to see the dedication, his wife Carol stated that she knows he would be very humbled by this. “We’re very excited. We are very thankful, and I know Bill would be so humbled and so proud that we are having this dedication. This is such an honor, and we are so pleased to be here for this today.”

During the dedication a little bit about Coach Steck was read to those in attendance with part of it stating the following.

“Many people talk about being the 1% that actually impact others’ lives in a positive manner because they crossed paths with people and made a difference.”

“Bill Steck was the 1% every day of his life. Unfortunately, Coach is not here to see this today, but as he loved Evergreen and his desire to see all of us achieve, I am sure he is watching from above.”