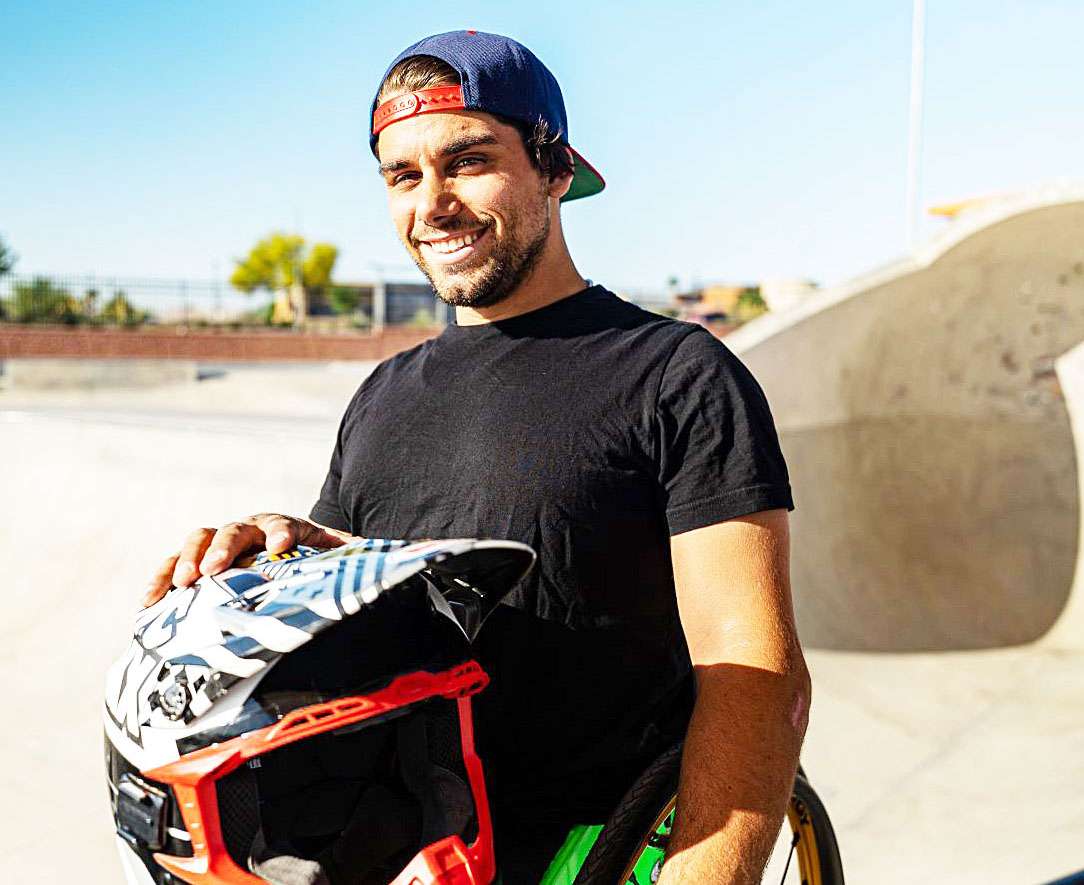 AARON “WHEELZ” FOTHERINGHAM … This promo photo provided by Wheelz publicity gives just a small idea of what kind of guy Aaron is.  For a lot more info and plenty of great pics of the amazing tricks he can do in his wheelchair, check him out online!

On Tuesday, October 11, Aaron ‘Wheelz’ Fotheringham will be rolling into town, courtesy of the Bryan Area Foundation, to speak to kindergarten through fifth grade students and teachers from the Bryan City and St. Patrick’s elementary schools.

The purpose of this event is to appreciate people of different abilities while educating and inspiring all students to dream big no matter what challenges that arise in their life.

It will also be a continuation of the conversation and fundraising effort for the new Bryan Lincoln Park Inclusive Playground being built on the former site of the Lincoln Elementary School.

All this will take place at the Bryan Elementary School Gymnasium, 1301 Center St., Bryan, starting at 9 a.m., just for the students and staff (not open to the public.)

Aaron ‘Wheelz’ Fotheringham is a “WCMX” athlete from Las Vegas, Nevada, who was born with Spina Bifida, a birth defect of the spinal cord, which caused limited use of his legs.

He started using a walker, then crutches until the age of eight when he began using his wheelchair full-time.

Despite his physical struggles, he was able to find ways to adapt and overcome any obstacle that came his way.

Aaron’s first experience at a skatepark was in December 2000 when his father and older brother helped him to the top of a quarter pipe.

After some trial and error, eight-year-old Aaron rolled away from his first drop into a ramp, and at that moment he was hooked! Where most people see a wheelchair as a limitation, Aaron saw it as freedom!

In 2005, Aaron got the opportunity to enter BMX contests and managed to win a few.

Aaron loved the rush of competition but his desire to have other wheelchair-bound participants to compete against, challenged him to progressively try more difficult tricks.

Over the years, he achieved the world’s first backflip followed by a double backflip, front flip, backflip 180, and backflip 360.

All these daring stunts have changed his life and given him the opportunity to appear in magazines, newspapers, sports television, and a feature film.

He also gets the chance to travel all over the world speaking to groups and accomplishing his favorite activity, mentoring others with disabilities.

Aaron ‘Wheelz’ Fotheringham enjoys showing people of all ages that having a disability and using a wheelchair is not a restriction but an opportunity.

He is passionate about helping kids see wheelchairs in a new light and usually teaches them a trick or two that they can use for life.