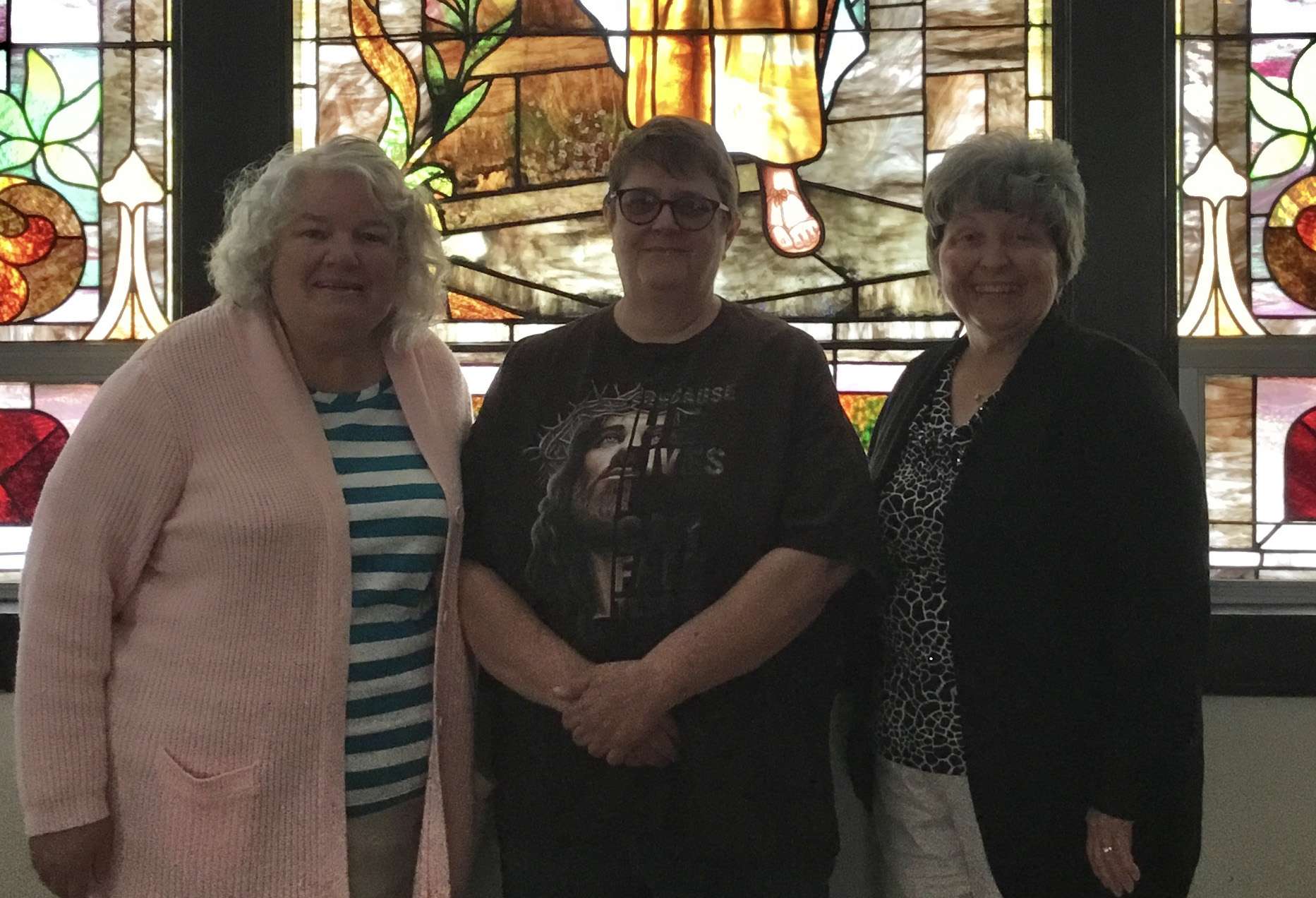 HISTORICAL STAINED GLASS WINDOW … Fayette historian Kathleen Fix, Interim Pastor Vicki Schnitkey and Susan Merillat, who has official church history scrapbooks containing documents which will be displayed at the gathering, proudly posed on April 21, 2022 in front of Kathleen’s favorite church window, “Jesus Knocking on the Door.” These ladies and the rest of the congregation at Fayette Christian Church are excited to be celebrating the 140th Anniversary of their church on May 1, 2022. (PHOTO BY REBECCA MILLER, STAFF

The historic Fayette Christian Church will be celebrating their 140th Anniversary on Sunday, May 1, 2022. All are welcome to join with this hearty band of survivors, at 10:30 a.m., as they rejoice in generations of serving Jesus from this place of worship.

Interim Pastor Vicki Schnitkey called in the local historian, Kathleen (Ford) Fix, to share the history and answer any questions during an interview.

Kathy is full to overflowing with knowledge, trivia and joy about the history of Fayette and especially this church of which she is a fourth-generation member.

She rejoices that her son, Bill, also attends Fayette Christian as a fifth-generation member of this church from their family.

Kathy is in the process of completing a book on Fayette Christian Church history and was gracious to share information from her yet unpublished book.

Most of the information shared here is quoted from her book, but there are also tidbits that were shared verbally.

The name of the church of which Fayette Christian Church is a part, has morphed through the years as this “unity of people for Christ” has grown since it began as a movement in post-Revolutionary War America.

They began as the Christian Church led by Barton Stone, and called themselves a “brotherhood.” The earliest site of the Christian Church was Cane Ridge, near Paris, Kentucky, as a group of six men dissolved their Presbyterian relationship, “in favor of a church less complicated, less dedicated to the use of creeds and more open to the reunion of Christians.”

At the same time that Cane Ridge was developing in Kentucky, two brothers in western Pennsylvania, Thomas and Alexander Campbell, were starting a movement called “The Disciples of Christ.” The two movements came together in 1832.

“Fayette’s Christian Church is a post-Civil War church” which came together in 1882, after the town was incorporated in 1873. Reverend E.T. Hayes “greatly assisted in this venture.

He was Pastor at the Spring Hill Church at Tedrow. E.W. Gordon, a Fayette Normal Music and Business College student and preacher, was also active in the organization of the Church of Christ of Fayette.”

The first services were often held at the Christian Union Chapel, where the Fayette Church of Christ was first established.

Sometimes they met at the Normal College building, until the first of their own buildings was erected on Cemetery St.

That building was dedicated by L.L. Carpenter in 1886, with Mr. Gordon preaching and conducting the services at the beginning. Reverend Hayes was the first regular pastor.

Sunday School was a new thing in the United States and as it grew across the nation, this church began to hold Sunday School classes also.

With this addition to the ministry, the building was no longer large enough so it was remodeled in 1906. Sadly, just two years later, “on the morning of February 2, 1908, fire broke out and in a few hours the structure was ruined.”

It was a total loss, with insurance only paying $3000 of the $10,000 it had taken to build it. During the time between buildings, the group met in the Fayette Opera House, which had been built in 1898.

The group chose a more central location for their new building, using two lots on West Main St. as they were “more accessible from all parts of the town.”

A huge fundraising effort took place and people from all denominations subscribed to the building fund, making it a true community effort.

Miner Lee Bates, the President at the time of Hiram College east of Cleveland, led the dedication service as his father was from this area.

This building is patterned after the “Akron plan” with the building facing north, the auditorium in the front, and the pews in the sanctuary arranged in a gentle horseshoe, on an incline, seating about 150.

Elegant stain glass windows that were made in Germany are memorials and are irreplaceable.The large window themes are “Clinging to the Cross,” “Christ knocking at the door,” and “Christ in Gethsemane.”

Pastor A.J. Welty, who served from 1907-1909, and Dr. Backus (who served medically in Fayette) dedicated much time to the construction of the stain glass windows.

“Although not a member, Dr. Rorick (another physician in town) was also a friend of the Fayette Church of Christ and a generous giver.”

Recently, through a generous gift in 2019 or 2020, from the Mary Anne and Beryl Clough family, and a memorial fund from members of Fayette Christian Church, new storm windows were constructed for these windows and repairs on the stained glass continues as an ongoing project.

Much has happened at Fayette Christian Church since their 125th Anniversary Celebration in 2007.

The parking lot is now paved, landscaping has been done “thanks to a memorial gift honoring Larry Fredrick and the garden expertise of Irene Fether, Larry’s daughter in law,” the parsonage has been painted, extensive painting has also been done in the church building, new carpet has been laid in the sanctuary and chapel, the organ was repaired and a new Yamaha clavinova was purchased.

Most recently, air conditioning was put in for the sanctuary and chapel, thanks to a gift from Lori and Mike Creighton, and a new side entrance door was put in by Jared Lemley.

Attendance at the church over the years has varied but Mrs. Fix remembers as a child when the whole building would be packed for special meetings.

On Sunday mornings, the attendance swelled during the 1950’s through the 1970’s. Now they average around 35 on a Sunday morning with around 50 on Easter Sunday.

Now, in 2022, “many people work hard to make the church successful.” Kandace Lemley presides over Church Board meetings, Curt Fether is Vice Chairman of the meetings, Jennifer Gould is the Church Secretary, Irene Fether is Church Treasurer and the Elders include Ron Merillat, Grace Sly, Curt Fether, Kathy Fix and Vicki Schnitkey.

Presently, Velda Brehm (95) is the oldest member and Mila Nofiger is the youngest at 3 years of age. Kathy Fix has been in this church for 70 of the 140 years and Grace and Don Sly for even longer than that.

During the celebration on May 1, 2022, they will be singing a hymn which was written for the 125th anniversary and has been adjusted to fit the 140th, to the tune of “For the Beauty of the Earth.”

The speaker will be Kathy Fix, the author of the history of the church. Mary Jo Bray, who pastored there from 1999-2006 will also be present and will share her memories of her time as Pastor.

Anyone else in the congregation, who would like to share, will be invited to do so. Reverend Joseph Hara, a regional Elder, will be present to represent the regional office for Christion Church of Ohio.

Linda Martin, the organist, will be playing for the service and Pastor Vicki Schnitkey will preside. Congratulations to Fayette Christian Church as you celebrate 140 years!