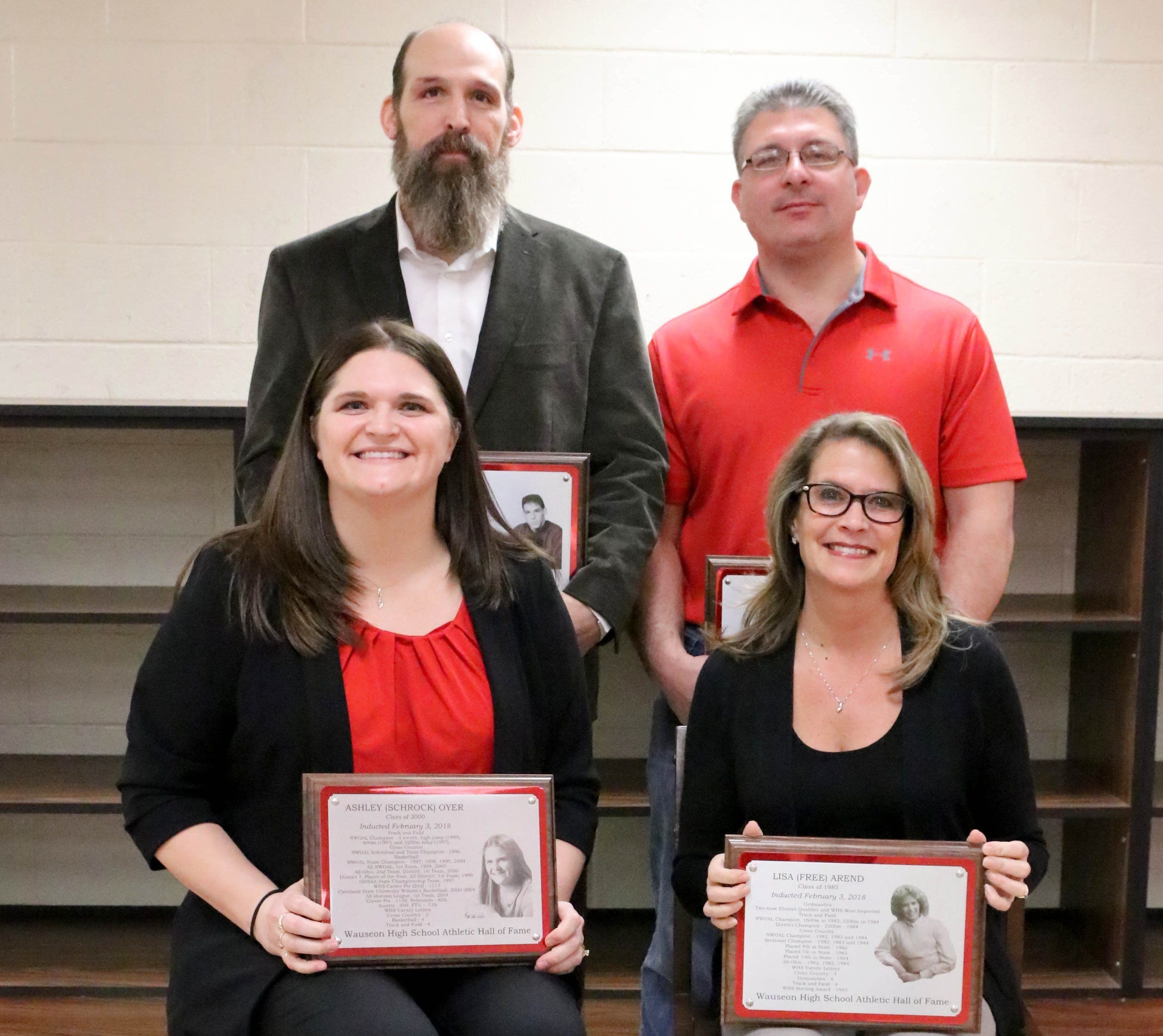 This past Saturday night, the Wauseon Athletic Hall of Fame inducted four new members in a ceremony between the junior varsity and varsity boys’ basketball game. The Hall of Fame committee, which consists of Jill (Newlove) Armstrong, Ken Baumgartner, Steve McElrath, Todd Myers, John Precht, Steve Schneider, Jack Warncke, and ex-officio Wauseon Athletic Director Matt Hutchison, has a list of guidelines they must follow in nominating and selecting inductees.

Each committee member has to be a graduate of Wauseon High School and they are appointed to 4-year terms by other members of the committee. After the varsity game, a reception took place in the high school cafeteria for family and friends to congratulate the new members. The members of the Class of 2017 are as follows:

Lisa (Free) Arend (1985): Lisa earned 12 varsity letters, 4 each in cross country, gymnastics, and track. After graduation Lisa attended The University of Toledo where she received a Bachelor of Business Administration Human Resource Management. In gymnastics Lisa was a two-time district qualifier and twice was awarded WHS most improved recognition. In track Lisa was the NWOAL 1600-meter champion in 1983 and 3200-meter champion in 1984. She was also the district champion in the 3200 and the district runner-up in the 1600 in 1984. She held WHS track records in both the 1600 and 3200.

In cross country Lisa was one of the most accomplished runners in WHS history. She was All NWOAL 4 times, including individual championships in 1982, 1983 and 1984. Her sister Kathy won the 1981 inaugural NWOAL girls’ cross country title. As a sophomore Lisa won her first league championship with a time of 19:22. In 1983, she was the 1st place finisher in 19:08. As a senior Lisa won her 3rd NWOAL championship with a time of 20:04.

They have three children; Megan, Korey and Zoe. Lisa worked in the public sector for 26 years, mainly in Economic and Workforce Development. Lisa is currently a board member with The Epilepsy Center of Northwest Ohio.

Nate Weber (1991): Nate was a three-sport athlete at WHS and earned 8 varsity letters, including 1 in track, 3 in football, and 4 in wrestling. Two days after graduation, Nate joined the Navy. He was a combat corpsman for 12 years, including the last 4 serving as a cardiovascular technician.

In track Nate ran the 200, the 4×200, and the 4×400, and was team captain his senior year. On the football field, Nate played guard his sophomore year (while only weighing 135 lbs.), and linebacker and running back as a junior and senior. As a team captain his senior year, he led the team in tackles. Nate was All-NWOAL, All-District, and All-Ohio honorable mention. Nate’s best sport was wrestling. He was an NWOAL runner-up as a sophomore.

As a junior he was again a runner-up in the NWOAL tournament and WHS team captain and MVP. He registered a 25-9 record on his way to a 4th place finish at 152 lbs. at the OHSAA state tournament. During his senior year, Nate was once again selected as a WHS captain, compiled an impressive 27-4-1 record and earned MVP honors. He was the 152 lbs. NWOAL champion, a sectional champion, District Runner-Up and placed 2nd at the state tournament.

Later in his military career, Nate joined the Army Flight Program and became an Army helicopter pilot, instructor pilot, and maintenance test pilot. He has served our country in Iraq, Afghanistan and South Korea. He had been a member of the all-Army wrestling team and retired from the military in 2017.

He is currently the President of Consolidated Aeroscout Venue (CAV), a company specializing in implementing complete flight and maintenance instruction specific to scout-attack helicopters. Nate and his wife of 19 years, Lisa, have 5 children, Sydney, Max, Zane, Jeremiah, and Lincoln.

Tony Spadafore (1995): Tony earned seven varsity letters, four in wrestling and three in football. He earned a bachelor’s degree in business management from the University of Toledo. While Tony was a four-year varsity letter winner in wrestling, he made his biggest mark as an outstanding defensive lineman on some of the best football teams in Wauseon sports history. Those teams finished with a combined record of 32 wins and 4 losses over a three-year period. As a sophomore he was the fourth leading tackler on a fine team that went 7-3.

His junior year he was the third leading tackler on the 1993 undefeated 14-0 state championship team, an impressive accomplishment as a defensive lineman. In addition to being a leader on defense, Tony filled in on offense against Liberty Center and rushed 24 times for 184 yards and 2 touchdowns in a 20-0 victory in the closest game of the regular season.

He was a captain on that team which was undefeated in the regular season and finished with 11 wins and 1 loss as regional runner up. Tony was named First Team All-NWOAL, First Team All-District and First Team All-Ohio as a defensive lineman. Tony was also honored with the 1994 Associated Press Division IV Northwestern Ohio Defensive Player-of the-Year award.

Tony currently lives in rural Wauseon with his wife Trisha. They have three children; Zach (21), Reagan (18), and Juliana (16). He has worked at North Star Blue Scope Steel for the last seventeen years.

Ashley (Schrock) Oyer (2000): Ashley earned 10 varsity letters in cross country, basketball, and track. She received a Division I basketball scholarship from Cleveland State University and graduated in 2004 with a Bachelor of Science in Middle Childhood Education.

She was part of the Lady Indians’ 52 game win streak and a 65-game regular season win streak. Ashley averaged 20 PPG her junior and senior seasons.

Following her junior season at Cleveland State, she was named 2nd Team All-Horizon League and also to the league’s All-Defensive team. She is also the only player in school history and in NCAA Division I to record back to back triple-doubles that season.

After her senior season at Cleveland State, she was named to the 1st Team All -Horizon League and was the Most Outstanding Player at Cleveland State. She finished her career with 1,150 points, 658 rebounds, 400 assists, a .739 free throw percentage, and three triple-doubles.

Ashley currently lives in Wauseon with her husband Josh and their two sons Grady and Logan. She teaches sixth grade math at Wauseon Middle School and is the girls’ varsity basketball head coach. Ashley is thankful that she is able to give back to the school district and basketball program that gave her so much.