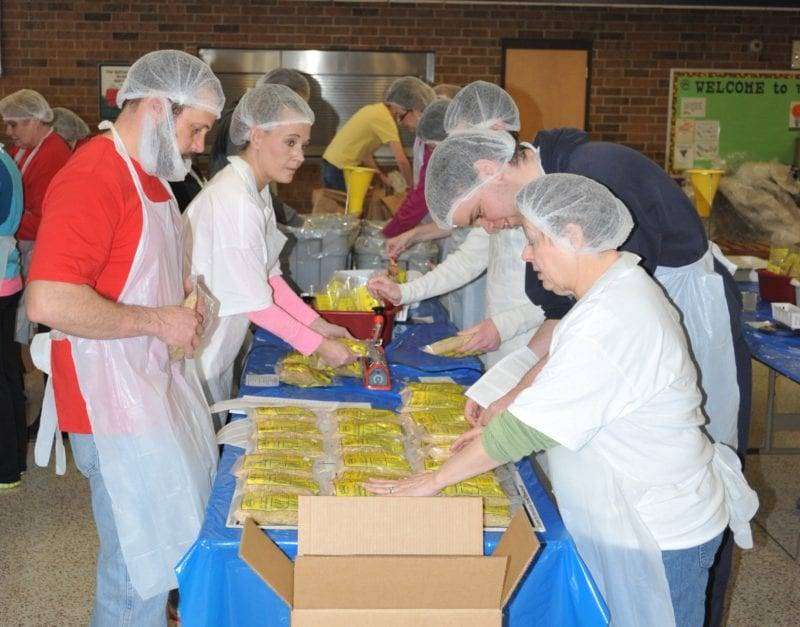 To say that the Williams County United Way is jumping with activity is a profound understatement. To say that Executive Director, Bill Pepple, is in constant motion, seeking where the Williams County United Way can work with and help the community is an understatement even more profound than the previous. A look back at the past two weeks speaks volumes as to the aforementioned statements.

On March 7, the Williams County United Way sponsored the Feeding Williams County event at the Bryan Middle School. Under the auspices of Des Moines, Iowa based non-profit, Outreach Incorporated, over 250 volunteers joined together to measure and package family-sized dinners of beans and rice, or macaroni and cheese. The event might have been named Feeding Williams County, but the volunteers came from all over, including some from Fayette in Fulton County. With that many volunteers, two shifts of work were easily staffed, and the target of 70,000 meals packaged and boxed was easily met. That number is 20,000 more than was packaged in 2014. Each 36 package box will eventually be distributed to any one of the food banks and pantries in operation across the county. “We’re doing something a little different this year,” Bill Pepple explained. “Last year, we distributed all the food the day we packaged it. This year, we are asking that the food banks take a two or three month supply. Then, as they need it, they can draw from our warehouse here. It then becomes a much more equitable distribution, based upon need. If someone is using it faster, they will get replenished faster.”

Another newer service of the Williams County United Way to aid citizens in need is the We Care Cabinet. Whereas food pantries supply the necessary sustenance for daily life, the We Care Cabinet supplies personal care items like toilet tissue, toothbrushes, deodorant and such. While donations to food pantries are always welcomed, donations to the We Care Cabinet are especially needed. “We’re trying to roll that out more to the public,” said Mr. Pepple. “We’ve involved WBNO on a monthly basis. They’re going to have a remote broadcast, and people bring donated items to that sponsor’s location. The first one was done at Bryan Ford. There will be others done throughout the county, at different locations. The public can support that. we’re also going to roll it out to the churches, so that they too can collect. The most difficult part is receiving the goods. If someone says that they have rolls of toilet paper, but we’re busy doing something else, it becomes difficult as we don’t have enough volunteers to man the Cabinet to be able to receive it. We’re not geared up enough for it yet, but eventually we will be.” He added, “What we will probably do is use the church, like pick a certain church, and tell them the items that we need. If you would take the items to that church, we’ll come by once a month to pick them up…kind of like a route. We think that’s going to work. We’re going to meet with the Bryan Ministerial Association to talk about that, but we’re also trying to get into the other communities so say what we need. The hospital is doing that now in Bryan, Montpelier and Archbold…collecting personal care items from employees, and we pick them up. They match toilet paper, roll for roll. We get 100 rolls of toilet paper, and they match it with 100 rolls.”

Toilet paper is the most needed item for the Cabinet, at the top of the listing of what Mr. Pepple refers to the ‘Top Five’ list. Following toilet paper on the list is bar soap, deodorant, shampoo, and toothbrushes and toothpaste. “Will we do laundry soap and diapers? Yes,” Mr. Pepple said, “…we will eventually get into the laundry soap. Laundry soap is one of the most stolen items at Wal-Mart, just because it’s expensive. How do poor people launder their clothes? In a lot of cases, they don’t. They go get them at places like Grace Community. They wear them until they can’t wear them anymore, then they get other ones and they wear those.” The need is obvious. The need for donations is even more obvious. All of these items eventually find their way into the local food banks. “We use a ‘pull method’,” Mr. Pepple explained. “They will submit orders to us, based upon what we have in the Cabinet. Then, we’ll deliver the order to them. They don’t come to us; we have a warehouse and someone who will deliver to them. It’s the same thing as with the boxed food from the Feeding Williams County event.”

When it comes to volunteers, there are always openings available with the Williams County United Way, but as Mr. Pepple explained, there is something new on the horizon to help target and direct those who want to get involved. “Something that we’re going to launch that we’re really excited about is something that we’re going to call, ‘Get Connected’,” he said. Those who want to volunteer, but don’t know what to volunteer for, will find this online signup a blessing. “People call and say, ‘Bill, I’d like to volunteer. Do you need any volunteers?’ I might say, ‘I don’t know…give me your number.’ With Get Connected, you get onto a website where you press a button, and you register as a profile. On the other side, you will have organizations with events for which they will need volunteers. They post their events. If it is something of interest to a person registering, they might look and say, ‘Hey…I’d like to do that.'” According to Mr. Pepple, the target for rollout of the Get Connected website is as early as next week. “We’ve already got the thing done; we’ve just got to connect it. We’ve been working hard at it.”

Every year, the Williams County United Way is tasked with raising funds, and in 2015, that goal is $320,000. That’s not their only goal though. “The other goal is to give it away where it will have the most impact within the community,” explained Mr. Pepple. “Trying to figure that out is a challenge in itself. Is hunger a manifestation of addictions to drugs, alcohol or other things? I don’t know, but I DO know that drugs are a real problem in the county. When the courts have to have a separate docket just for drugs, it’s a real problem.”

Is the Williams County United Way currently involved in any drug programs, or is there something lined up in the immediate future? “No, not at all…and that bothers me,” Mr. Pepple replied. “We’re seeking, and I think that we have to be responsive. We’ve done some work in strategic planning. Our model has been to raise money, and give it to agencies who do programming, or we fund programming through an agency. There’s been a lot of discussion at our level to say that we really should attack some of these other things. Hunger has been one of them…what can we do about hunger. We’ve tried to initiate some things, obviously the food packaging thing being one of them. The other side of it is, is hunger something to do with drug addiction? Is it a manifestation? Are there other things that we can do in that regard? I think that maybe there is, but I’m not sure what that is. I think that we have to look at where we can put some money in order to make an impact in our community in that regard. I don’t know where that would be. We’re going to have to look at that really hard to see if there is a way that we can make a difference. I never thought that heroin would ever get here. I knew that we had a meth problem, but it’s gotten to the point that employers are saying that they need to hire people that can pass a drug test and will show up every day. That’s a real problem.”

So what does this all mean, and what is being said? The standard of ‘Live United’ is more than just a catch phrase to the Williams County United Way. It requires more than just sentiments and well wishes to truly live united…it takes action, and sometimes it takes bold action. Each and every person reading this has something to offer to the cause. Can you help distribute food at a food bank, even if it means nothing more than to assist the elderly or handicapped to and from their car? Can you help package meals at the next Feeding Williams County event? Can you offer your time to help pick up and distribute items for the We Care Cabinet? These are just three out of the hundreds of volunteer opportunities that exist. The opportunities are real. They exist, and they exist in areas that you probably never imagined. The volunteers to fill those openings are what is sorely needed.

Financial gifts to the Williams County United Way are always appreciated, as are food and personal care items for the food banks and the We Care Cabinet. As you have read though, volunteers make the whole operation function…and it’s not all physical. Volunteers are also needed in the intellectual area as well. As Mr. Pepple said, there are areas that he simply knows little about. Can you bridge the informational gaps that are currently hindering the Williams County United Way from reaching ALL of Williams County in an efficient way that would ensure services to every corner of every community? Do you want to join your friends and neighbors in being part of something that is bigger than the combined sum of everyone involved? Do you want to see your footprint upon hunger as it is being stamped out in your community?

If you answered yes to any of the above, then pick up your phone and call the Williams County United Way at 419-636-8603. If the Live United concept sounds appealing, and you want to make a difference in your community, Bill Pepple would like to have a word with you.