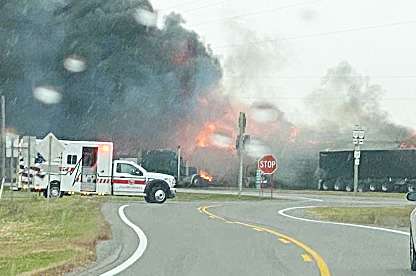 LYONS FIRE … ALS 4 sits on the side of the road as crews battle a fire at 3 J’s Trucking just East of Lyons on the corner of 120 and 109. (PHOTO PROVIDED)

Fire departments were dispatched to the fire at 1:42 p.m. with reports also being made of explosions on scene.

These are said to have been caused by oxygen or acetylene tanks that were on-site.

The Lyons Royalton Fire Department was the first fire unit to come on scene.

Fire crews began to set up a 5-inch fire line across 109 and the road was shut down.

Port-a-tanks were set up and a hydrant connection was established.

Electric lines also came down on the property and were taken care of by Toledo Edison.

One employee was treated by EMS crews from Lyons and was released on scene.

The scene was officially cleared at 5:06 p.m.