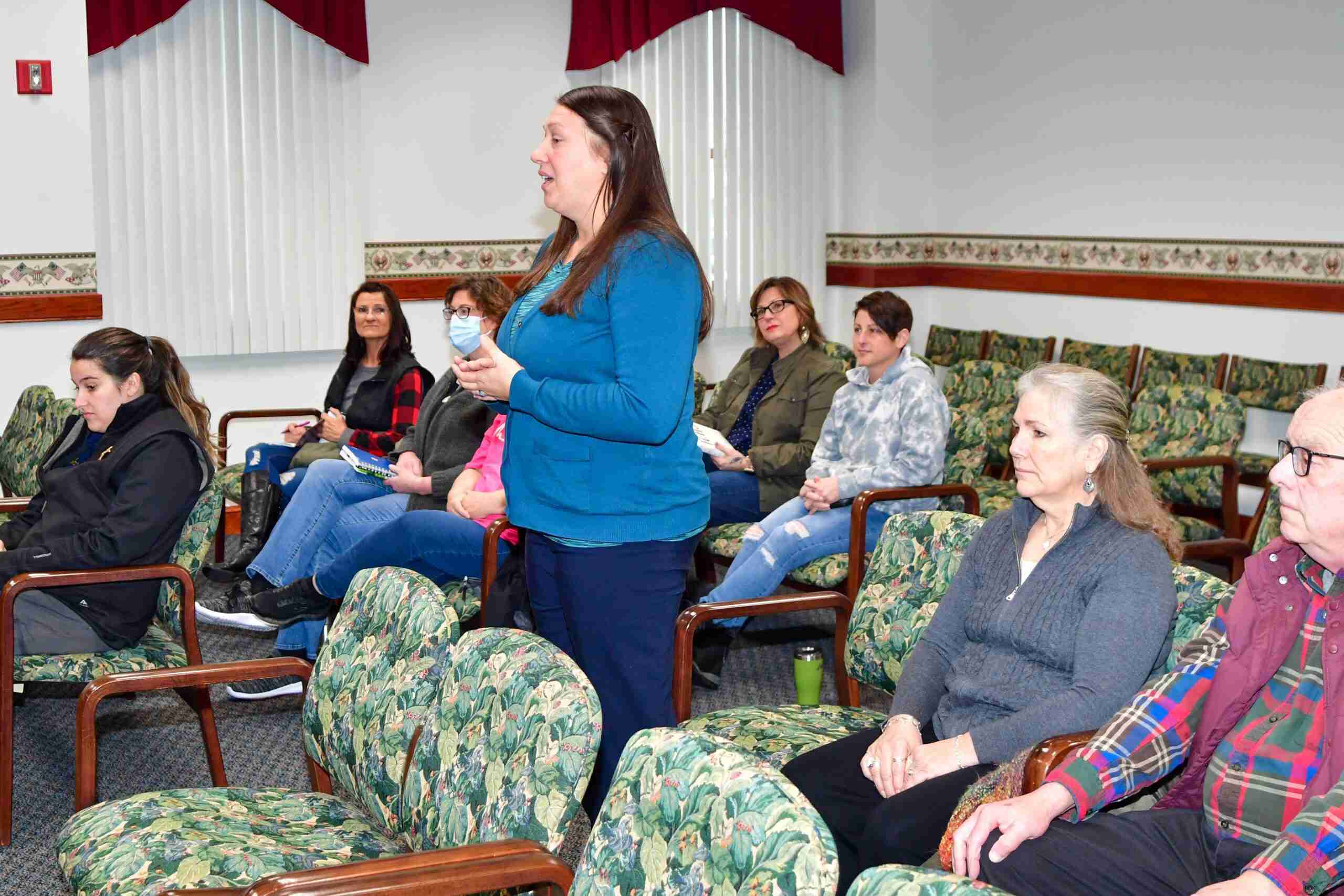 HUMANE SOCIETY … Dr. Jessica Miller speaks to the Fulton County Commissioners regarding the future relationship between the two organizations and the Fulton County Dog Warden. Numerous volunteers from the Humane Society were also present. (PHOTO BY JACOB KESSLER, STAFF)

The Fulton County Commissioners held a meeting on Tuesday, December 28th. The meeting was called to order at 8:59 a.m. followed by the Pledge of Allegiance and an opening prayer.

Commissioners first moved to approve the minutes from the previous meeting that took place on December 23rd as well as the agenda for the current meeting. Approval to pay the bills as presented was also approved before the commissioners moved to review correspondence.

The correspondence was from MVPO and was in regard to a membership fee increase. A motion was made and approved for an increase in payment for the membership.

Commissioners then voted to approve the following additional agenda items. An increase and transfer for appropriations for various departments.

Approval for the 2021 road mileage certification, disposal of unneeded, obsolete or unfit property regarding an EMS trade-in.

Approval for the area office on aging extension for a PY2021 grant award. A sub-recipient agreement 2021-138 with Fairlawn Haven Retirement Community.

Authorization for the use of ads for a request of qualifications for the Ohio Department of Development. Approval for purchase orders and travel requests. Commissioners then broke for recess at 9:06 a.m.

Upon return at 9:14 a.m. Lettie Hernandez was present to speak. She informed the commissioners about changes that have been taking place regarding employees and the different positions they have.

Some employees have switched job roles while others have retired. Applications have also started to come in, which will then be reviewed. Updates on employee performances were also given as well as an update for the ordering of supplies and dealing with the current backorders.

Lettie then informed the Commissioners that she would like to start purchasing a new sweeper each year. She also asked about maintenance on the sweepers, and if the maintenance department could help with that.

It was stated that a conversation would be needed with them to see if that is possible. A discussion then took place regarding the maintenance department moving out to the airport.

It was asked where the housekeeping supplies will be kept and if they would still be located in the current building. It was stated that discussions are still ongoing for that subject.

The Commissioners also asked Lettie to give them any information she had on the vacuum she wished to purchase so that they could get a purchase order started. Commissioners then moved to adjourn the meeting at 9:23 a.m.

The Commissioners also held another meeting on Thursday, December 30th. The meeting was called to order at 8:59 a.m. followed by the Pledge of Allegiance and an opening prayer.

The Commissioners first moved to approve the minutes from the previous meeting that took place on December 28th followed by the approval of an amended agenda.

The agenda was amended to pull Resolution 2021-947 in regard to appropriations. A new agenda item was also added to cover the resignation of a housekeeping employee.

A review then took place for the 2022 Holiday Schedule for the Fulton County Highway Department. Commissioners then moved to approve the following agenda items.

The FAA FY20 Final Project Closeout Report as well as authorization for the Board President to sign. Contract 2021-139 with Owens Community College on behalf of the Fulton County Sheriff.

Dave Lantz then addressed the Commissioners with a department update. Information was given regarding ongoing projects including the final touches for the new EMS building, building inspections, figuring out auction items, and work on the Quonset hut.

They are also looking to update the Title Bureau. It was asked how all the staff was feeling and if everyone was doing ok. Dave informed them that currently everyone is doing good and staying healthy.

The Commissioners also asked Dave if the maintenance department would be open to repairing vacuums. Dave informed them that they would be able to. Commissioners then moved to enter into recess at 9:15 a.m.

Upon return from recess at 9:29 a.m. volunteers from the Fulton County Humane Society were present to speak to the Commissioners to give them an update on the organization and discuss a future relationship with the Fulton County Dog Warden.

This was followed up by Dr. Miller stating that there was a report done by a reporter on TV who stated that someone from the Humane Society said something negative regarding the Commissioners current participation with the Humane Society.

It was stated that this was not said and was also not the feeling from the organization and that the society appreciates the support of the county.

Commissioner Jon Rupp stated that, when they heard this from the reporter on the TV, they were disappointed due to their financial support throughout the years.

Dr. Miller then proceeded to inform the Commissioners that, moving forward, the building that was gifted to them will have to be renovated which could possibly take a couple months. Commissioner Jon Rupp then asked about a possible revenue stream from dogs given to the humane society from the Dog Warden.

Dr. Miller stated that it does give a little bit of revenue, but it mostly evens out due to the care put into the animals, housing, food, water, and other services.

It was also asked if dogs received were only from Fulton County. Dr. Miller stated that they do receive dogs from other kill shelters and areas from other states as well.

Both sides then expressed the need to stay in contact and meet again when more information is gathered. The Commissioners then moved to adjourn the meeting at 9:45 a.m.