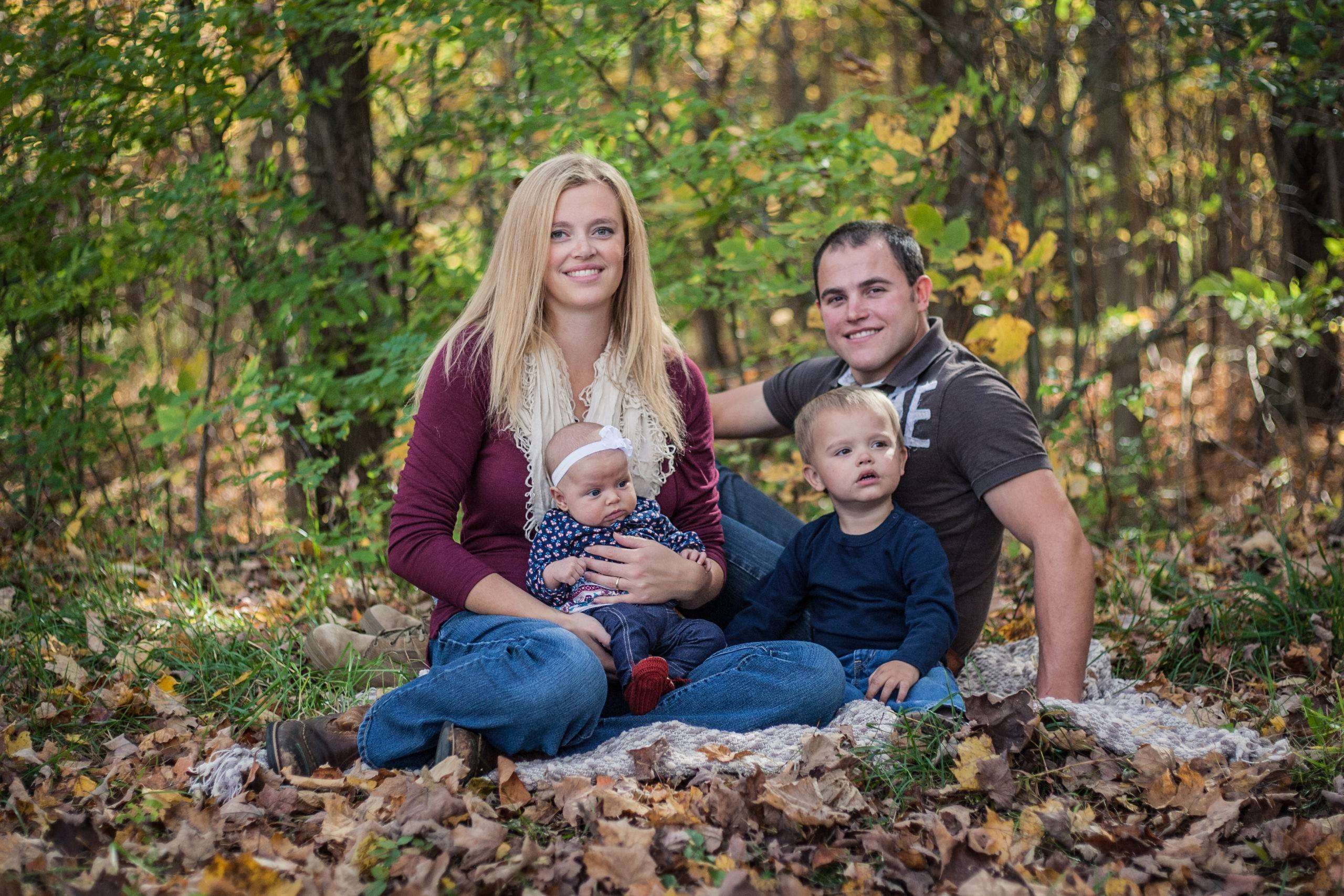 MISSIONARIES … Daniel and Bethany Schrock pose here with their little ones, Luke and Grace, for their Missionary Post Card which they are using as they travel to raise the support they need to be fulltime missionaries in the Dominican Republic.

Fulton County, Ohio, residents Daniel and Bethany Schrock, who live just a couple of miles north of Pettisville, are selling their home, quitting his job and will be spending the next few months traveling from church to church, and home to home, to raise support for becoming full time missionaries in the Dominican Republic (DR).

The young couple, and their two small children, Luke and Grace, will be joining themselves to Freedom International Ministries, Inc., located on the south east side of the Dominican Republic, near the coast.

There is excitement, joy and purpose in their voices as they speak of God’s call on their lives to move there and participate with this Christian School, in a setting which in Daniel’s words, “allows many opportunities to share the gospel.”

They look forward to being involved in multiple areas, but specifically when they first arrive, Daniel will be the head of Fleet Maintenance, caring for the six buses that the school has presently, as well as any other construction vehicle and small machine maintenance needed.

“As the school grows to include all 12 grades, they will need 25 buses to transport that number of children,” Daniel said, explaining that he will be there for all of that. Bethany is going to have an administrative position which will allow her to be at home, until the children are old enough to go to school. Also during their first year, they will be focusing on learning Spanish.

Daniel, who is a Wauseon native, was born to Jack and Celeste Schrock. Following graduation from High school, he joined the Marines and served from 2009-2013. One day, while stationed in Afghanistan, he was reading a friend’s Blog, which was linked to “Asher’s Acres,” a Blog written by 17 year old girl Bethany, who lived in Michigan. Clicking on that link, in April of 2011, began the road which led to the joining of two hearts in marriage that December.

“We had so much in common,” Daniel shared. “We discovered while chatting online, just to name a few, …we both grew up on farms, our parents have five children with two of them adopted, and our parents had foster children.”

Both Daniel and Bethany spent their entire school years being taught at home and are homeschool graduates. Bethany had grown up in Michigan, born in the Grand Rapids area to Jim and Sandy Schreur, and at ten years old, had moved just north of Coldwater.

Following their wedding, they moved to off base housing near Camp Lejeune, North Carolina, where Daniel was stationed. While Daniel was in Afghanistan for another seven month deployment, Bethany spent time getting to know some of the other young military wives and corresponding online again with the man who was now her husband.

When his military term ended in June of 2013, the newlyweds found a house in Wauseon, and as Bethany put it, “began setting up for the American dream.”

Bethany says she had always been interested in the possibility of missions and when their friends Jason and Becky Suon, who were serving in the DR, mentioned that they needed a bus mechanic, she got excited.

“I could see us being a good fit,” she said, as she likes teaching and he is mechanical, but Daniel did not seem interested in going. Bethany recalled, with a smile, “Becky and Jason and I began to pray that if we were to go, God would change Daniel’s heart. He didn’t know that we were praying that!”

Soon an opportunity to go to Diesel Mechanic school in Chicago came up for Daniel, and the Suon’s told Bethany that they had been praying for a diesel mechanic for quite a while. “God was moving behind the scenes,” Daniel said, “because someone was looking for a place where they could rent and have their horse in the country, so we were able to rent our home and go.”

Two weeks before he graduated, he was looking for a job, and opportunities in the field of diesel mechanics were not showing up. A gentleman from his parents’ church in Wauseon called and asked if he would consider a job as a foreman in his masonry company.

Daniel thought it seemed strange that it wasn’t for what he had just studied, but felt led to take the job. Bethany and their friends in the DR felt like it was a step toward the mission field, because they also need someone at the school who knows masonry.

While they were in Chicago, Daniel had begun sensing that God might want them to go to the DR, still not knowing that his wife and friends were praying for him. They had bought their house in 2014, had two children join their family and were settling into “the American Dream” when one day in December 2017, he came home from work and asked Bethany how she would feel about going full time to the Dominican. “I was shocked!” Bethany shared.

“The whole time he was telling me that he felt that God was leading us to go, I couldn’t stop smiling. Finally, he asked why I was grinning.” Daniel added, “Yeah, she just kept smiling and when she told me that the three of them had been praying for God to show me, it was a huge confirmation.”

This past February, Daniel traveled to the Dominican and in March they both went, to confirm that this was indeed where they are to go. Their “Sending Church” is First Baptist of Wauseon. In preparation for raising their own support, they have been studying through reading and attending a support raising training.

“We launched our support raising in June,” Daniel shared, adding, “We have to have monthly support solid, as well as money for the move and for getting settled there, before we can go.”

They have already been invited to multiple churches and have future churches scheduled as well as meetings to present to individuals and families. The date by which they hope to have all of their support raised is January 1, 2019. As Daniel’s job keeps him away for 12-16 hours a day, he is ending that so that they can focus on support raising.

“It is hard to say yes to opportunities and then try to fit it around my work schedule,” he said. “This way we can do it full time. We are trusting God to show the people who are supposed to be our supporters.”

“Our families are all supportive of this change in our lives, “ Bethany shared. “Daniel’s oldest sister is a missionary in Uruguay,” with Daniel adding that they “hope to be a part of the bigger picture of discipling. The children will have a lot of hours around us, so we hope to help them see potential for their life. There are endless opportunities! It is all about relationships.”

Looking to the future, Daniel is excited to train others in mechanics, as farming sugar cane is pretty much the only way to have an income there, and this will give them new ways to make money. “As the bus fleet grows, I will need assistants and that will open the door to train others,” he added.

“The Lord is making all this possible,” Daniel said, with Bethany adding, ““I remember telling Becky Suon that I didn’t see this happening for at least 10 years! But God had a different idea.” She is glad that she chose to pray for those two years, dropping little hints here and there for Daniel, but really letting God be the one who told him.

Daniel shared that God used Matthew 6:19-21, in the Bible to bring him to the place where he came home and dropped that surprise question about going into missions on Bethany. That passage is of Jesus saying, “Do not store up for yourselves treasures on earth, where moth and rust destroy, and where thieves break in and steal.”

“But store up for yourselves treasures in heaven, where neither moth nor rust destroys, and where thieves do not break in and steal; for where your treasure is, there your heart will be also.”

Another verse, Philippians 4:6, says, “Do not be anxious about anything, but in everything by prayer and supplication with thanksgiving, let your requests be made known unto God.” “This is the verse that I feel sums up my testimony,” Bethany said.

“We prayed and God answered.” These two young people couldn’t be happier as they walk out what they know to be God’s will for them. If you are interested in supporting the Schrock’s, they can be contacted at DanielSchrock@itisforfreedom.com or at their website, www.itisforfreedom.com. They may also be contacted through First Baptist Church, 419-335-1201.