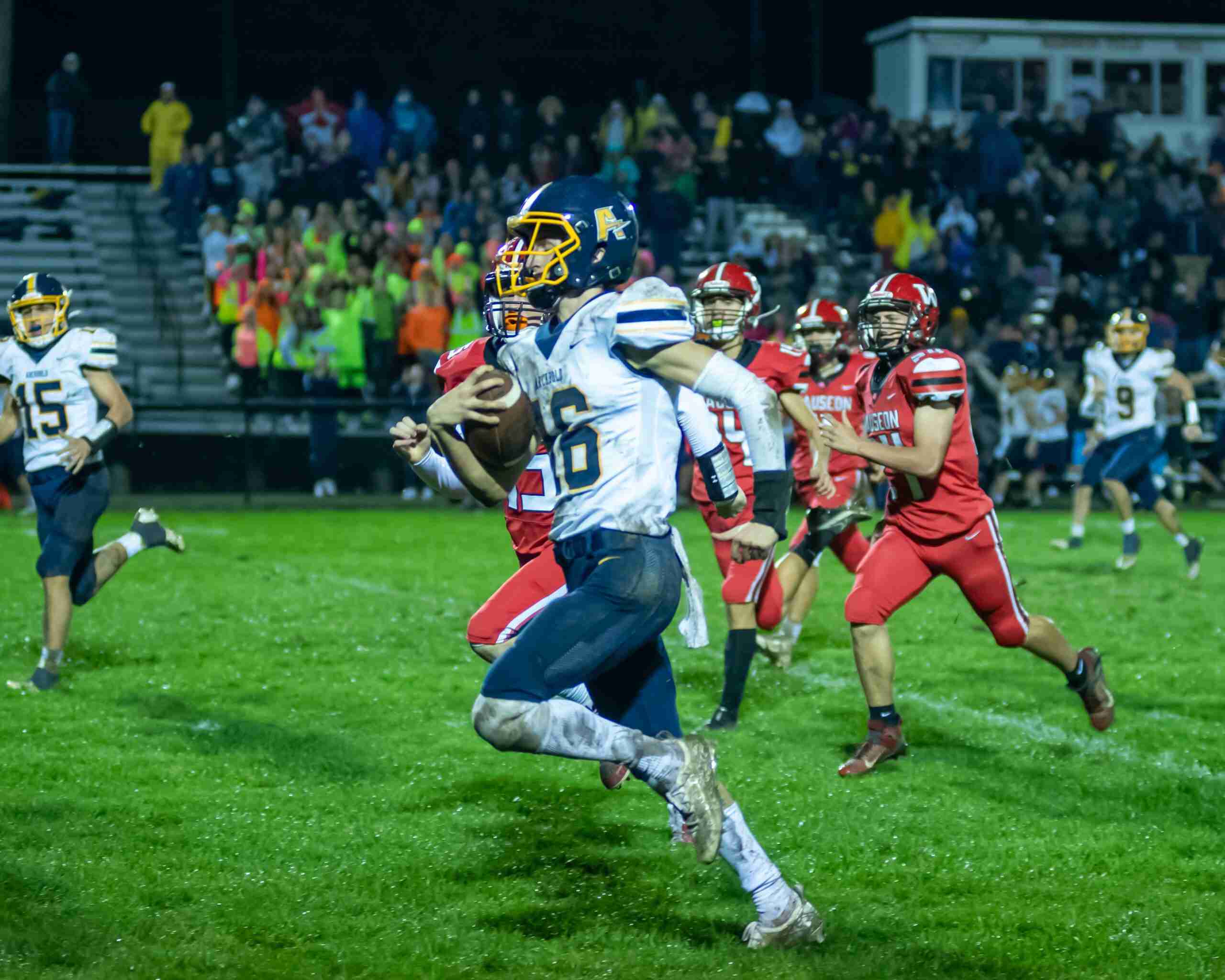 OFF TO THE RACES … Archbold’s Karter Behnfeldt heads to the end zone on a 91-yard kickoff return for a touchdown, the third longest return in school history. (PHOTOS BY JACOB KESSLER, STAFF)

WAUSEON – With horrible field conditions that continued to deteriorate as the game progressed the Archbold Bluestreaks leaned on their running game to carry the load.

Archbold totaled 301 rushing yards on 45 attempts for an average of 6.7 yards per carry in a convincing 41-7 win over Wauseon at the newly named Larry L. Fruth Stadium at Harmon Field.

“We had planned on throwing a little bit more, but we had success with the run, so we just stuck to it”, commented Archbold head coach David Dominique following the game.

After the Bluestreaks first drive stalled due to penalties, they found the end zone on their second possession.

Quarterback DJ Newman would get a 14-yard completion to Carson Dominique, an 11-yard screen pass to Karter Behnfeldt, and a long run by Dominique to give the Streaks a 1st and goal at the three-yard line.

From there, Newman capped off the seven-play 60-yard drive with a three-yard TD run, the first of four rushing scores for the senior, to make it 7-0 with 3:35 left in the opening stanza.

Wauseon’s ensuing possession ended with Archbold’s first big play of the night as Jack Hurst intercepted a third down pass from Elijah McLeod along the sideline to give Archbold great field position.

Starting at the Wauseon 32, Dominique and Newman each had third down conversion runs and after a Wauseon 15-yard facemask penalty it was 1st and goal at the two.

Newman would punch it in from two yards out as the Archbold lead grew to 14-0 early in the second quarter.

Wauseon responded with their best drive of the night by going to the short passing game to move the ball.

Facing a third and nine at the Archbold 23, McLeod found Sam Smith wide open over the middle for a 23-yard touchdown pass to cut the deficit to 14-7 at the 6:27 mark.

The Wauseon momentum was short lived though as Karter Behnfeldt returned the ensuing kickoff 91 yards for a touchdown to push the lead to 21-7.

On the return, Archbold was called for their second sideline infraction after the play and that combined with a kickoff out of bounds gave Wauseon the ball at the 50-yard line.

The Indians would go backwards with a holding and illegal procedure penalty before McLeod found Jonas Tester on a 42-yard pass to the Archbold 33 on 3rd and 25.

The drive ended as McLeod was sacked and then his fourth down pass to the end zone fell incomplete to give Archbold the ball back.

From their own 24, the Bluestreaks pounded the ball down the field with a combination of runs by Dominique and Newman, eventually setting up a 3rd and 10 at the Wauseon 12 with :12 left in the half.

Archbold then broke out a trick play as Dominique took a direct snap and handed off to Newman who then faked a pitch to a wide receiver on a reverse and Newman kept the ball on a run around the right side to the end zone for the score to make it 27-7 after the missed extra point.

The second half started with Wauseon’s opening possession ending with a punt and the Archbold ground game going to work again.

The ten-play, 62-yard drive by the Bluestreaks ended with Newman’s final TD run of the game, this one covering 11 yards, to increase the lead to 34-7.

Following another turnover on downs by Wauseon, Dominique carried the ball on all seven plays for Archbold on the 50-yard drive, ending with a six-yard TD run to start the fourth quarter and putting the running clock rule into effect.

“We told him (Dominique) before the game we we’re going to need a big night and he delivered.”

For the second straight week the Wauseon offense struggled in the wet conditions as they were held to just 156 yards of total offense after generating 199 against Delta in their previous game.

“We’re not built to play in the mud,” said Wauseon head man Shawn Moore. “Part of coaching is to adapt and do something, but our guys are meant to play on turf.” “Their guys dominated our guys on the line of scrimmage. They kept pounding it. They are going to be a tough football team going forward.”

This is Archbold’s fifth straight win against the Indians, meaning the Lions Club Trophy will remain in Archbold.

The win guarantees Archbold at least a share of the NWOAL championship and a win next week against Patrick Henry will give Archbold the title outright.