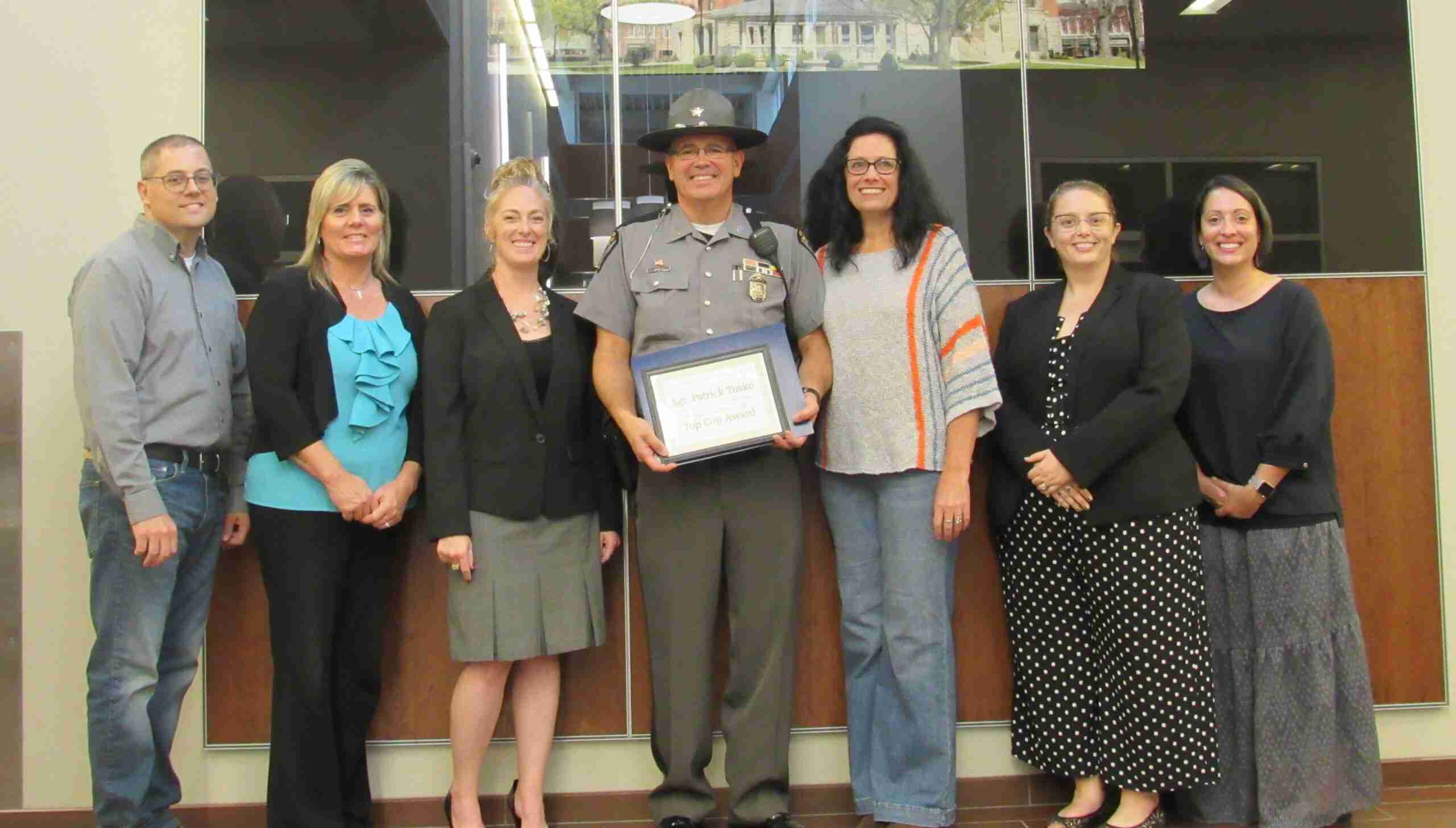 Sgt. Tusko was chosen because he has dedicated his life to ensuring and improving the safety and security of the people of Williams County, the State of Ohio, and the United States, and he has done so in a manner that is always professional and respectful.

Sergeant Tusko and his family moved to Bryan, Ohio in 1975.  And throughout his entire life he wanted to follow in his dad’s footsteps and get into law enforcement and military. That is exactly what he has done.

Sgt. Tusko began his career in the U.S. Marine Corps in 1988 where he was an Assistant Platoon Commander and Squad Leader on the Infantry Rifle Squad. He was also part of the Marine Force Atlantic Rifle and Pistol Team as well as a Marksmanship Instructor. Tusko is a veteran, having served in the Gulf War. He left the Marine Corp in 1992.

In 1997, Tusko became on Ohio State Highway Patrol Officer with the Defiance Post, where he has remained through the present. In 2013 he was promoted to Sergeant and Assistant Post Commander.

Tusko’s duties include patrolling and responding to criminal and traffic matters that involve state roads and other areas within the OSHP jurisdiction, as well as assisting other local law enforcement agencies when requested on vehicle crashes, pursuits, and emergency situations. Because he is a Sergeant he also supervises and helps guide other OSHP officers.

Williams County Prosecutor Katherine Zartman says, “Sergeant Tusko is an exemplary officer, who advances the law enforcement community because of the trust he inspires in all who meet him.

He displays a level of professionalism and respect to every individual, regardless of circumstances, that works wonders in deescalating situations and resolving matters peaceably and fruitfully.  The felony cases that Sgt. Tusko investigates and brings to our office are consistently excellent.

And he does it all with a smile on his face. He enhances the law enforcement profession, and Williams County is better because of him.”

Williams County Prosecutor Stacey Stiriz nominated Sgt. Tusko for the award because of his work on several cases, she said, but one in particular came to mind. In that case a person was found to be driving on the turnpike at over 100 mph and refused to pull over.

The suspect accelerated around semitrucks, driving at 137 mph on the shoulder. The vehicle did eventually stop, and the suspect came out screaming at law enforcement, threatening to shoot them.

She is clearly either having a mental issue or is under the influence, as she makes many delusional and grandiose statements. She resisted arrest, screaming expletives at the officers.

She had to be forcefully put into the patrol car, then she kicked the cars window and door once she is on there. That is when Tusko comes on scene, and everything changes.

He deescalates the suspect and the situation in an incredible manner. Being respectful and polite, despite her delusional state, Tusko calms her down by getting her to focus on him, making her feel comfortable, asking for her permission to help her, and being nice to her until she trusts him and calms down.

Sgt. Tusko’s philosophy is to keep the community he lives in safe and to interact with its citizens on a daily basis in a manner that allows them to see that he is there to make them safe and to help them.

When asked about memorable cases, he cites his first DUI as one he will never forget, as well as the many fatal crashes that he has handled. In 2015, Tusko rescues two  individuals  who had crashed into the creek here in Williams County.

The vehicle was overturned in the creek, with the occupants trapped inside. Tusko entered the water with his rescue rope and successfully removed both of them.

Even though both passed away, Tusko played a major part in giving them a chance for survival and giving their loved ones a chance to say goodbye. Tusko received the OSHP Superintendent’s Citation of Merit for his heroic actions in that incident.

State Representative Jim Hoops was also present and presented Sgt. Tusko with a resolution signed by Hoops and the Speaker of the House, Robert Cupp, congratulating Sgt. Tusko on the Top Cop Award, and saluted him as one of Ohio’s finest law enforcement officers.

Sgt. Tusko has lived in Williams County almost his entire life, and now resides in Bryan with his family. He is extremely proud that is daughter has followed in his footsteps, serving in the 180th Fighter Wing of the U.S. Air Force.  Sgt. Tusko is also active in the community, church, and local events.