WILLIAMS COUNTY GAME OF THE WEEK: Everetts Accounts For Five Touchdowns to Lead Edgerton Past Montpelier 48-7 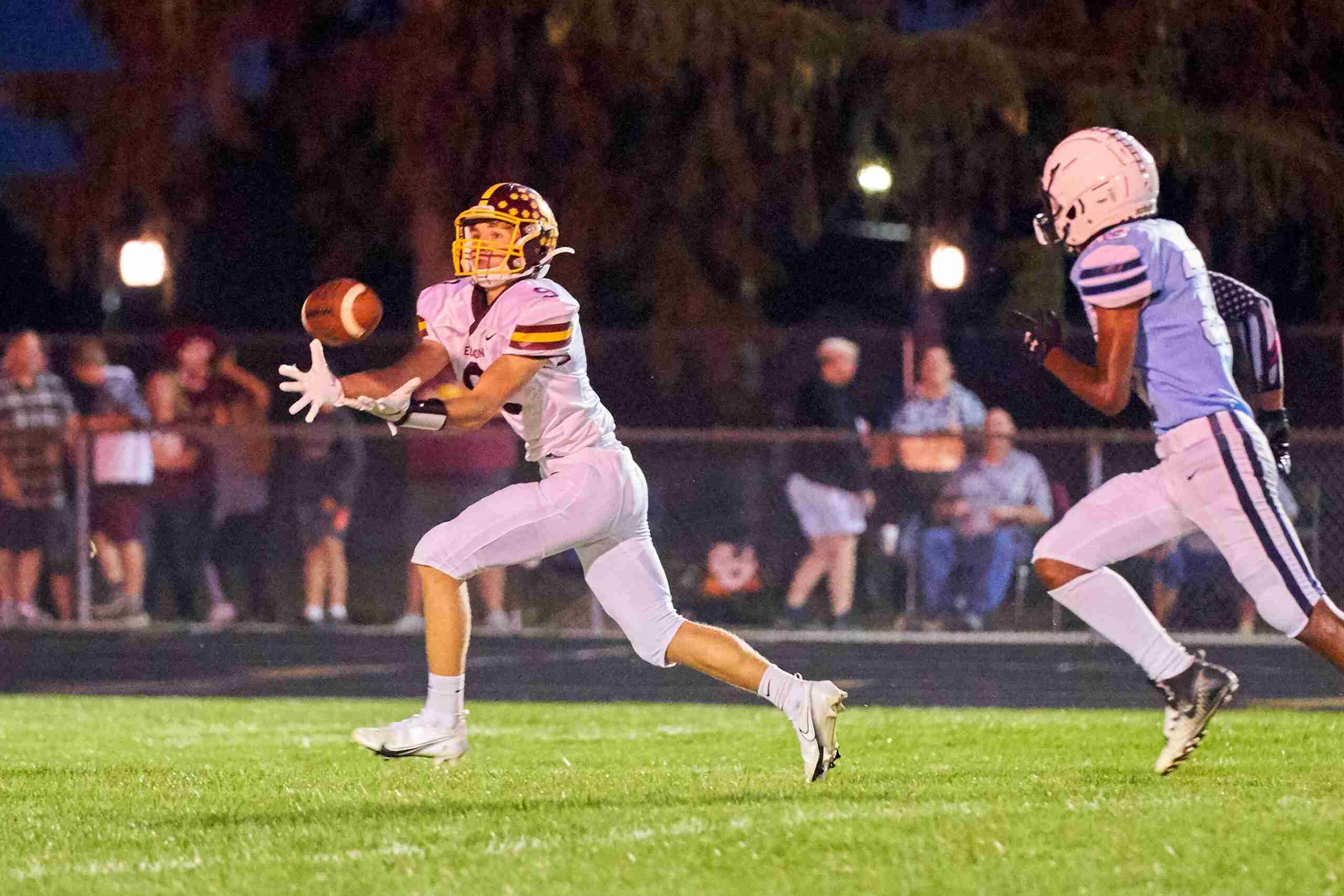 BEHIND THE DEFENSE … Edgerton wide receiver Kadyn Picillo hauls in one of his two touchdown catches in the second half. (PHOTO BY RICH HARDING, STAFF)

For the night, Everetts was six for eight passing, for 151 yards. He carried the ball six times for 90 yards and had a 34-yard punt return that set up another score.

“The line blocked (well, so) I felt comfortable in the pocket and guys got open,” Everetts said. “We have a couple of things to clean up (offensively and defensively), but we played hard. On the punt return, I was working my way downfield and the guys had some big time blocks for me.”

After a rough opening night loss to Edon, Edgerton seems to have righted the ship, winning their next two games, outscoring their two opponents by a combined score of 108-7.

“We knew we were facing a tough opponent (in a season opening loss to Edon) and we’ve learned from that,” said Edgerton head coach Brody Flegal. “The defense has been doing a nice job and tonight, we were a little more balanced offensively.”

“Now, we’ve got a tough one (in the Green Meadows Conference opener) against Ayersville, but it’s going to be fun.”

Against Montpelier, the Bulldogs struck quickly, right after the opening kickoff. On their first offensive play from scrimmage, running back Warren Nichols burst loose down the right sideline and scampered in from 74 yards out.

Montpelier then struck back to take its only lead of the game, at 7-6. On fourth down and three to go from the Edgerton 47, running back Jacob Lamontagne broke through an opening in the line and went the distance. Jamison Grime’s extra point then gave Montpelier the lead after one quarter.

The Locomotives had a chance to tack onto that lead, recovering Edgerton fumbles on its next two possessions, from the Edgerton 30 and 40-yard lines, respectively.

But the first Montpelier drive ended with an incomplete pass on fourth down. Next, on fourth down and four yards to go from the Edgerton 23, quarterback Landon Brigle was stopped for a one-yard loss.

“We couldn’t convert on either of those scoring chances and that really hurt,” said Montpelier head coach Joe Brigle. “We were still right in the game, but they scored twice before halftime to build a big lead on us.”

“Their quarterback (Everetts) was a tough matchup for us. But our kids battled and played hard up to the very end and I’m proud of that.”

Five plays later, after stopping Montpelier on downs at its own 24, Edgerton took a 12-7 with 7:46 to go in the first half, on Everetts’ four-yard TD run. The big play of the drive came on Everetts’ 40-yard pass to Carter Herman, to the Montpelier one yard line.

Everetts then scampered in from the Montpelier 28-yard line with 3:24 to go in the first half and Edgerton led, 18-7.

The Bulldogs then took a 26-7 lead at halftime when Everetts found Herman from 20 yards out, with just 46 seconds left in the first half. Everetts then ran in the two-point conversion.

Montpelier then threatened to get back into it when it took the second half kick and drove to a first down on the Edgerton 32-yard line.

But on fourth and 10 from the Edgerton 32, quarterback Landon Brigle was sacked for an 11 yard loss.

Edgerton finished off the scoring for the night on an Everetts 15-yard TD pass to Picillo and a 51-yard run by Owen Roth.

UP NEXT: Montpelier (0-3) will face Oregon Cardinal Stritch in the Toledo Area Athletic Conference opener and Edgerton (2-1) will be at Ayersville (2-1) to start GMC play.