FULTON COUNTY GAME OF THE WEEK: Tinora Running Game Leads The Way In 23-13 Win Over Wauseon 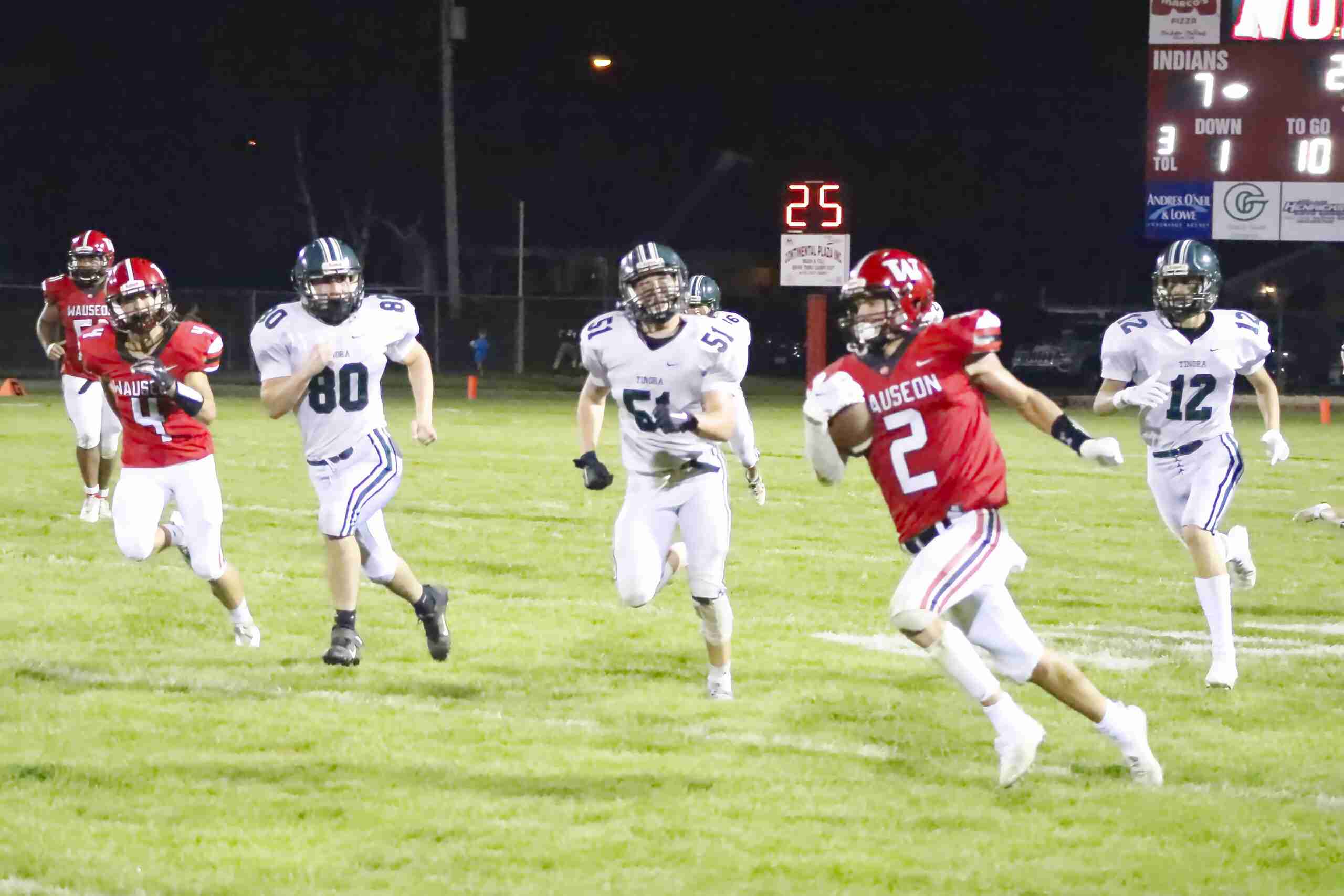 KICKOFF RETURN … Jonas Tester breaks into the open field during an 89-yard kickoff return for a touchdown in the fourth quarter. (PHOTO BY JACOB KESSLER, STAFF)

WAUSEON – The more experienced Tinora Rams traveled to Harmon Field on Friday night looking to bounce back from a tough loss last week to Liberty Center. After an impressive 40-8 win over Fairview in week one, Wauseon had no answers for the play of the Tinora offensive and defensive lines as Tinora picked up a 23-13 win

Tinora was able to apply pressure to Wauseon quarterback Elijah McCleod on the first Indians possession which set the tone for the night.

On Wauseon’s third play of the night McCleod was flushed to his left and threw a pass into traffic that was intercepted by Gavin Eckert to give the Rams the ball at their own 46-yard line.

After converting a fake punt on fourth down to keep the drive going, Cole Anders scampered right up the middle on a trap play for 21 yards and a touchdown to give Tinora an early 7-0 lead.

Wauseon responded with their best offensive possession of the night keyed by a third and twenty conversion when McCleod found Jonas Tester down the middle of the field.

The seven play, 60-yard drive ended with McCleod finding Tyson Rodriquez on an 18-yard catch and run for a score to tie the game 7-7 with 3:35 left in the first quarter.

Tinora would find the end zone again midway the second quarter as running back Brandon Edwards busted loose down the sideline for a 52-yard touchdown run to make it 14-7 Tinora heading to halftime.

Tinora threatened on their first drive of the second half, but the drive ended with a fumble recovered by Wauseon at the 8:42 mark.

After a Wauseon punt, the Rams engineered a methodical 12 play, 75-yard march that culminated with a KP Delarber 22-yard TD run to stretch the lead to 20-7 heading to the fourth quarter.

The Indians opened the fourth quarter with another three and out which was followed by another lengthy Tinora drive. The Rams this time used 14 plays to burn up nearly 9:00 of the fourth quarter clock, ending with a 21-yard field goal by Dylan Camp to stretch the lead to 23-7 with 2:41 to go.

Tester tried to spark a late rally for the Indians by returning the ensuing kickoff 89 yards for a touchdown to trim the lead to 23-13 after an unsuccessful two-point conversion try.

Tinora was able to stop the Wauseon momentum as they recovered the onside kick that followed the touchdown and were able to run out the clock.

Delarber was the catalyst for the Rams ground game, which amassed 245 yards on the night, with 112 yards on 21 carries while Edwards carried nine times for 82 yards.

McCleod finished 11/18 for 118 yards with one touchdown and two interceptions and Tester had three catches for 40 yards.