FULTON COUNTY GAME OF THE WEEK: Wauseon Escapes With 14-7 Win At Delta 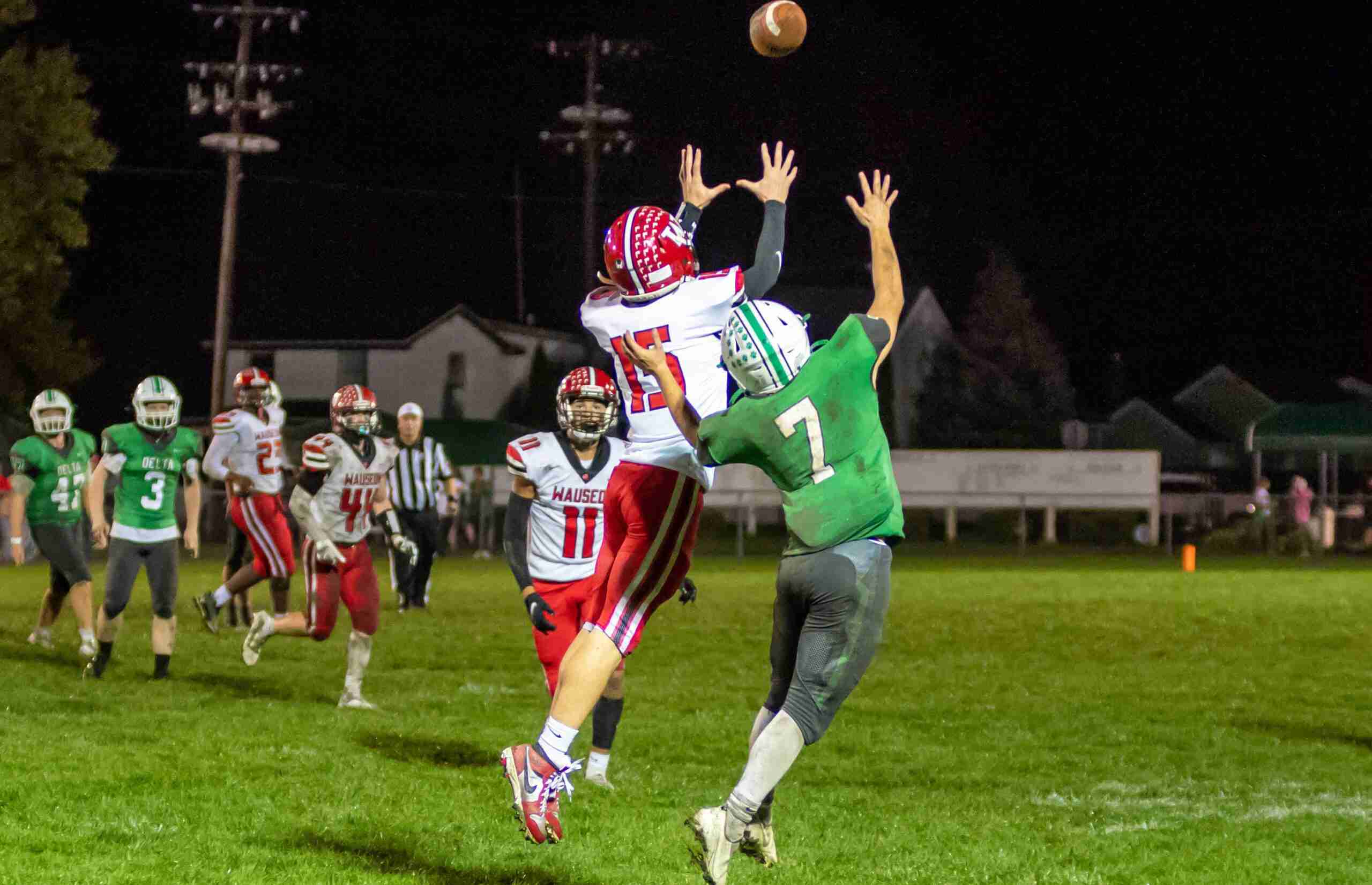 DELTA – The thunderstorm that rolled through Delta and caused kickoff to be delayed 45 minutes was just what the underdog Panthers were looking for. The muddy field conditions slowed down the high-powered Wauseon passing game as the Indians had to grind out a 14-7 win at Panther Stadium.

“I think it affected us out there”, commented Wauseon head coach Shawn Moore following the game. “We’re not built to play in these wet conditions.”

The Indians controlled the field position in the first half, starting three drives in Delta territory. Their first opportunity came after a bad snap on a punt for Delta gave Wauseon the ball at the Panther 31-yard line.

Wauseon quickly marched into scoring territory as Elijah McLeod went 12 yards to Sam Smith and eight yards over the middle to Jonas Tester to move the ball to the Delta five.

Two plays later the Indians found the end zone on a McLeod to Jude Armstrong five-yard TD pass to give the Indians a 7-0 lead with 1:04 left in the first quarter.

Another bad snap on a punt by Delta once again gave the Indians prime field position, starting at the Panther 33-yard line.

Wauseon drove to Delta 10-yard line, but the Panthers would get back-to-back sacks from Josh Tresnan-Reighard and Zane Shindorf to snuff out the Wauseon drive.

Despite not crossing the 50-yard line in the first half, the Panthers found themselves trailing only 7-0 at halftime.

Wauseon went to work to start the second half by moving into the red zone thanks to a 51-yard pass from McLeod to Tester.

The six-play, 59-yard drive ended when McLeod found Bryson Stump open in the flat for an eight-yard touchdown pass to extend the Wauseon lead to 14-0.

Delta would cross midfield for the first time in the game on their first possession of the second half before having to punt.

The Panthers would get their first big break of the game as a backwards lateral by McLeod on Wauseon’s ensuing possession went over the head of Armstrong and the Panthers alertly fell on it to give them the ball at the Wauseon 38-yard line.

Wauseon’s defense rose to the occasion though with a sack by Justin Duncan before Delta quarterback James Ruple would be intercepted by Ethan Borton to give the Indians the ball back with 4:55 left in the third quarter.

After a Wauseon three and out following the turnover, the Panthers marched the ball to the Wauseon 22-yard line where a facemask penalty against the Indians gave Delta the ball at the seven-yard line.

With a first and goal to start the fourth quarter Delta would commit their second turnover of the game, this one on a bad exchange between the quarterback and running back and Wauseon recovered the fumble at the 12-yard line.

Delta’s defense again held and forced a Wauseon punt which led to Delta’s best drive of the night.

Tresnan-Reighard kick started the possession with an 18-yard tote and Ruple later converted a fourth and one on a quarterback streak as Delta pounded the ball to the Wauseon eight-yard line.

The Panthers would eventually be backed up by an intentionally grounding penalty on Ruple and they would be faced with a fourth down and goal at the 12-yard line.

Ruple’s fourth down pass was intercepted by Tester at the one-yard line but a roughing the passer penalty against the Indians gave Delta a fresh set of downs at the five.

From there, Tresnan-Rieghard punched it in from five yards out to cut the deficit to 14-7 with 4:48 to go as the Delta drive took 13 plays, all runs, and covered 70 yards.

Delta would then attempt an onside kick which was recovered by Wauseon and the Indians began to work on the clock.

McLeod atarted the drive with a 14-yard screen pass to Stump and then Stump converted a third and inches with a seven-yard run to keep the drive going.

Wauseon was able to convert two more third downs on the possession with McLeod hitting Armstrong for 15 yards on 3rd and 11 and then McLeod connected with Logan Carroll for 11 yards on third and six, the latter allowed Wauseon to then run out the clock.

“I thought we played pretty well defensively. Delta is a physical football team, and they have some big kids running the ball”, added Moore. “Our guys battled and slowed them down and made them drive the field.”

The Indians ended the night with 199 yards of offense led by the passing game as McLeod went 19/25 for 181 yards and two touchdowns.

Armstrong hauled in 11 passes for 70 yards and Tester had five receptions for 77 yards.

The Delta running game rolled up 198 yards on the night led by Jerremiah Wolford with 107 yards on 11 attempts and Tresnan-Reighard rushed 18 times for 47 yards.

Wauseon now turns their focus to their rival, the undefeated Archbold Bluestreaks who will visit Harmon Field on Friday night.

“We’re going to have to be focused, this why you play football is to play in rivalry games like this”, said Moore when looking ahead to Archbold.