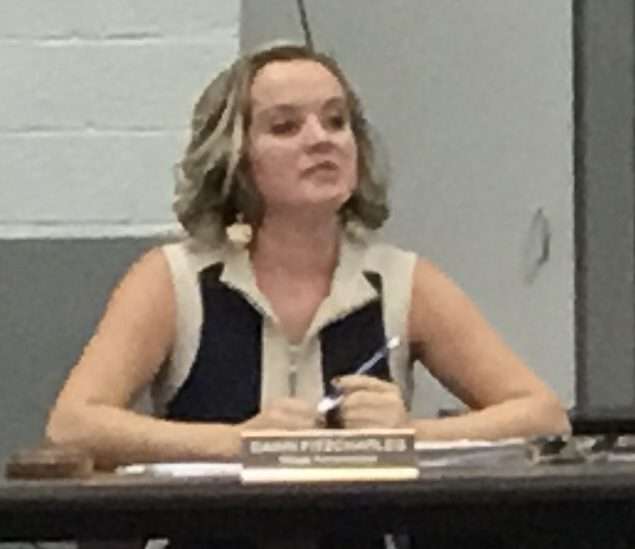 VILLAGE ADMINISTRATOR’S REPORT … Dawn Fitzcharles filled the Edgerton Village Council in on the projects of the village at the October 5, 2021 meeting. (PHOTO BY REBECCA MILLER, STAFF)

The regular, first monthly, Edgerton Council Meeting was held at 7 p.m. on Tuesday, October 5, 2021. Mayor Bob Day read a Proclamation, declaring October to be “Random Acts of Kindness Month”. The proclamation encouraged all Edgerton citizens “to look for ways to reach out and help and assist your fellow citizens in any way, to help gladden the heart and promote well-being with your random acts of kindness.”

Council approved the minutes for September 28, 2021 with all six council members present. Village Administrator Dawn Fitzcharles was, in her words, excited to announce that the Water Tower newest phase was completed on Friday, October first. She said she anticipates the inspectors to sign off on all the work, as they are very close to being done.

They also kicked off the gym lighting project and have applied for na Efficiency Smart rebate, which will be around $1200. This will save the village around $1000 a year.

A pre-construction meeting was held concerning another project which involved working through the permitting process with the railroad. They have been waiting for that permit for 59 weeks, and hope to have that soon. Currently the contractor plans to mobilize to Miller Park on November 4th and begin excavation on November 8th.

A couple streets will be closed to through traffic but residents and medical patients will still be able to use them. When the work is performed on U.S.6, it will be with traffic lights and flaggers.

She reminded the council, “This is the project that is going in between the park and Northwest St. to try to alleviate some of the flooding that we have back there, and it is Phase 1 of three.” With that they will finish construction on December 6 and there will be some further work in the spring of 2022.

U.S. 6 from the Stateline to Edgerton is on Ohio Department of Transportation’s schedule to be replaced, as well, so with both of those projects it should be really nice when they are done.
She has also been working with Clemens and Nelson for the Wage and Compensation Plan and Job description review.

They are close and she will be asking for a committee to work on that to bring to council. The truck for the water department was delivered. There are some capital replacement items to go to auction now, too.

Denise Knecht, Village Fiscal Officer, shared the September Financial report for signatures and council approved the payment of bills that had been circulated.

Mayor Day announced that the Community Work Day which had been scheduled for Saturday, October 9, was cancelled because of some complications with water valves, telephone poles and guide wires. They are considering moving the Dedication Rock to “someplace more prominent” as it has not been seen very well where it is located.

He said they will let the Park Board work on that. Concerning the survey they took, they are working on getting a date set when they can gather and go over those.

-Chuck Wallace asked about Halloween and it was reiterated that Trunk or Treat will be held from 5-6, and people can start setting up as early as 3:00 if they have detailed set up. Regular Trick or Treat will be from 4-6 on both sides of the street.

He also wanted to know why the weeds around the railroad on Depot Street are “such a mess” and why they can’t force the railroad to clean it up the way they do for residents. Fitzcharles said that she is in communication with the railroad and was told the crews are concentrating on safety needs right now.

She has asked him to come in and sit down to determine what the village can do to make it look better. She also asked them to submit a spraying plan.

As far as this year goes, the crews and rain have let it get out of control. Wallace said he feels they should not be able “to get away with that.” Mayor Day said they are working on it and want to keep a good relationship with them.

-Tom Karnes said that he has had a resident request that a toddler swing be put on the swings out back of the Village Building. Fitzcharles made note of that and said that the equipment will be put up on October 14.

He also asked about the Sidewalk projects and Fitzcharles said that Oak St. is in the Environmental phase and they are waiting for official funding from state, and it is built into the 2022 budget.

-Leslie VanAusdale asked what happens next about getting the Park Board decisions made. Mayor spoke about the proposal and said he is not pleased with that as it involves the school board members and does not make sense to him.

Following quite a bit of discussion, it was agreed that they need to do something about it, so it will be on the agenda for the October 19, 2021 council meeting.

-Jason Gruver brought up the topic of the CRA committee for housing and council determined that this topic should also be on the Agenda for the October 19, 2021 meeting.

With no further business to discuss or approve, council voted to go into Executive Session to discuss employment and compensation of public employees, with No Action taken, before adjourning for the evening.