FULTON COUNTY GAME OF THE WEEK: Wauseon Cruises Past Bryan 31-0 In NWOAL Finale 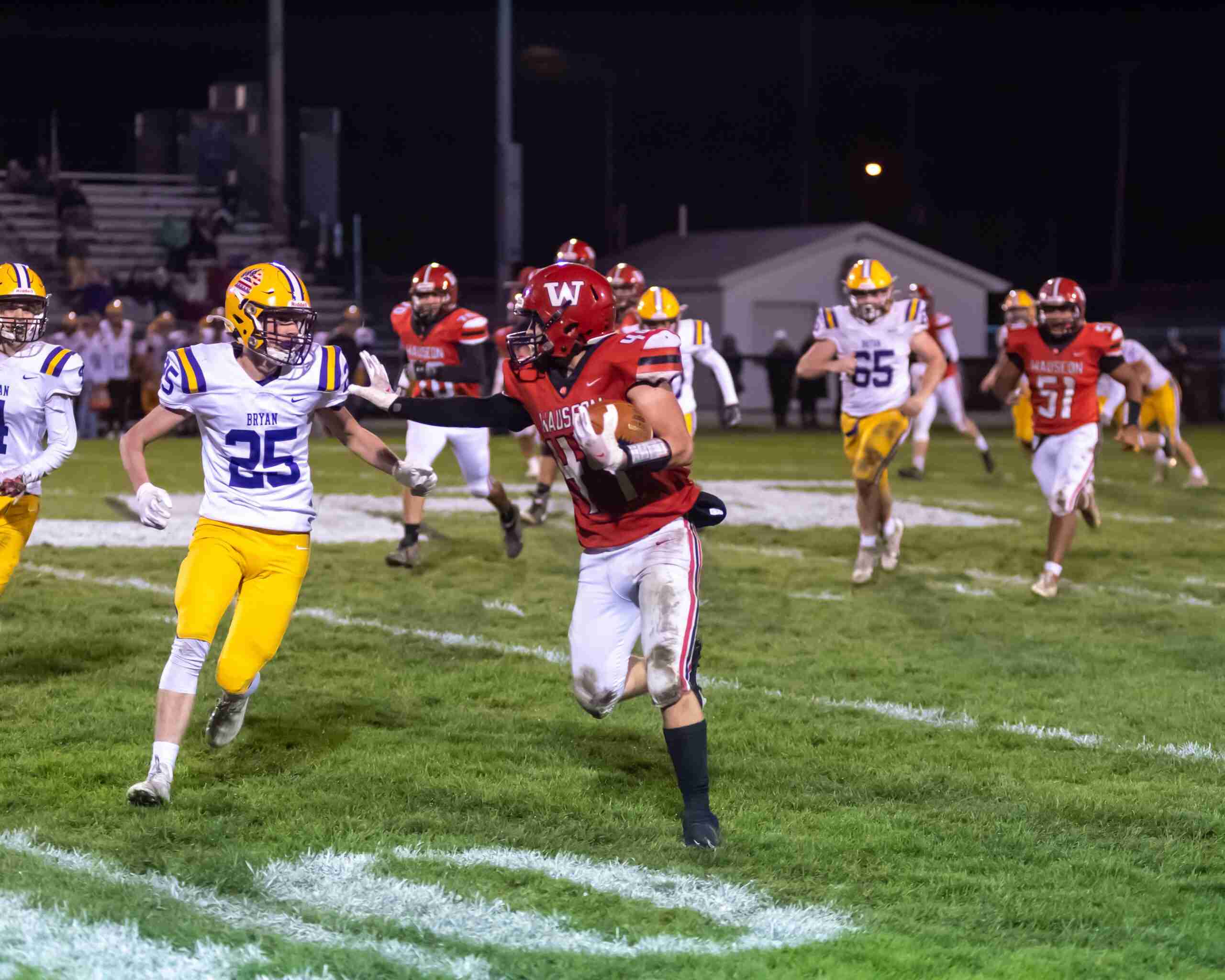 BIG SENIOR NIGHT … Bryson Stump gets ready to stiff arm a defender on a fourth quarter carry. Stump ran for 145 yards on 23 carries with a touchdown. (PHOTO BY JACOB KESSLER, STAFF)

WAUSEON – The Golden Bears were unable to take advantage of a couple early scoring opportunities and the Indians used a 17-point second quarter to take control on their way to a 31-0 win.

Bryan entered the game at No. 18 in computer points as they needed a win and some help to make the playoffs while Wauseon was in good position at No.11 heading into the game.

Bryan got the start they needed with Trenton Wolfe returning the opening kickoff 65 yards to the Wauseon 25-yard line. Bryan couldn’t move the ball though and Dylan Dominique’s fourth down pass to the end zone was picked off by Jude Armstrong to turn Bryan away.

Bryan would get the ball back as Wauseon quarterback Elijah McLeod fumbled on the Indians first offensive play of the game and Bryan pounced on it at the Wauseon 22.

The Golden Bears moved to the three-yard line where a high snap on fourth and goal caused the play to break down and once again Bryan came away empty.

After each team had drives that ended in turnover on downs, Wauseon broke the ice with a four-yard touchdown run by Jonas Tester out of the Wildcat formation to give Wauseon a 7-0 lead.

Wauseon’s next score came via the big play as McLeod on third-and-twelve scrambled and found Jonas Tester along the sideline and he broke a tackle and went 65 yards for the score to make it 14-0.

The Indians defense would get the ball right back for their offense as Logan Carroll intercepted a pass and returned it to the Bryan 15-yard line.

From there, Wauseon was forced to settle for a 25-yard field goal by Tyson Rodriguez to make the score 17-0 at halftime.

Wauseon marched 60 yards in six plays to start the second half with Bryson Stump carrying the ball five times, including the last three yards to the end zone as the lead grew to 24-0.

Bryan continued to sputter offensively as their next two drives ended in a punt and a turnover on downs respectively.

The Indians continued to pound the ball with their running game in the final quarter as Stump ripped off runs of 36 and 22 yards on a drive that ended with a missed field goal.

Tester closed out the scoring and capped off Senior Night for Wauseon with a 42-yard punt return for a TD with :38 left in the game to make it 31-0.

Wauseon ended the night with 339 yards of total offense, 152 on the ground, led by the senior Stump who rushed for 145 yards on 23 carries.

“We challenged them (offensive line) this week after getting beat up a little by Archbold last week and I thought they responded well”, said Wauseon head coach Shawn Moore when talking about the Indians success in the run game.

McLeod was 14/18 thru the air for 187 yards with Tester catching five passes for 129 yards and a touchdown to go with his rushing TD and punt return touchdown.