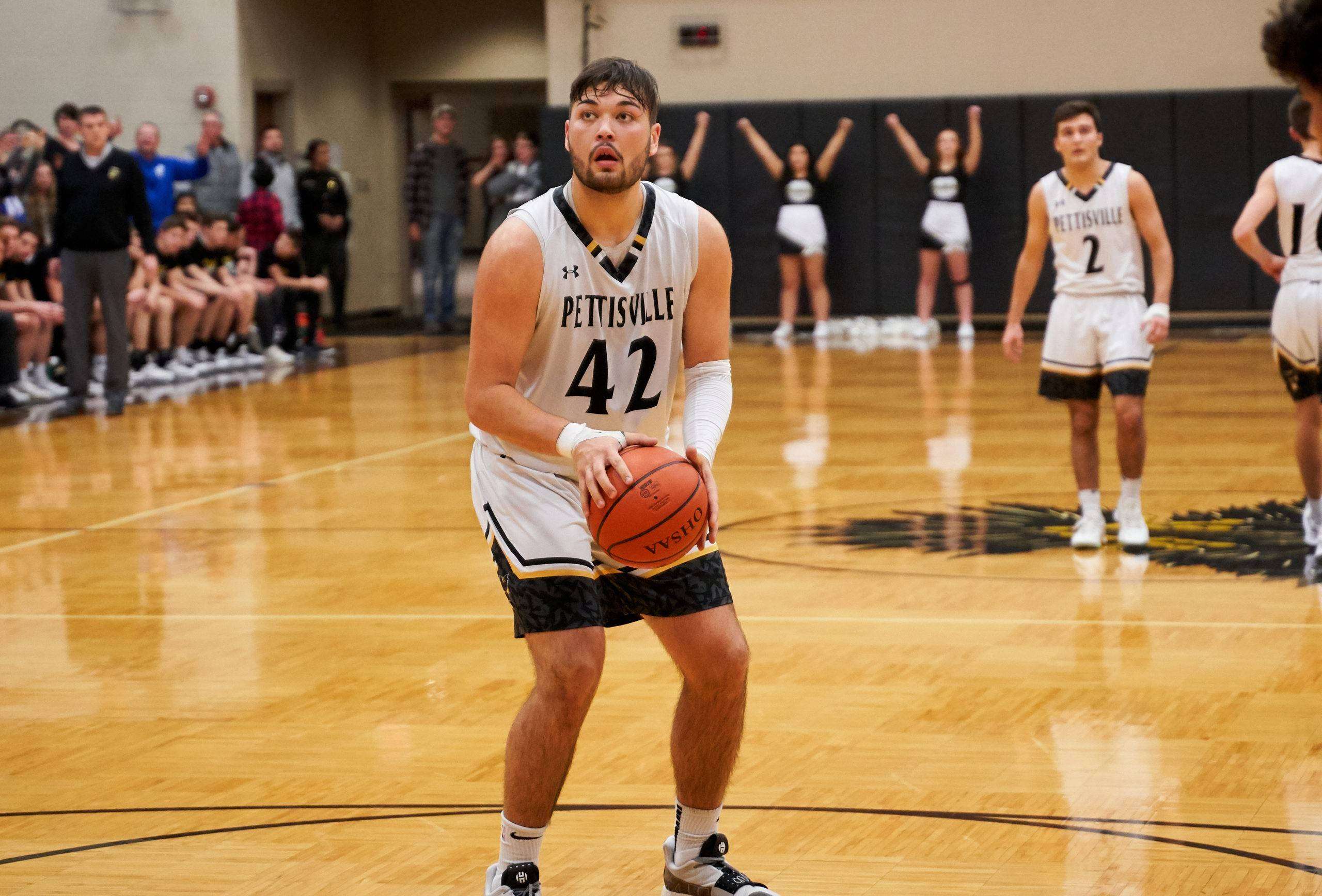 On Saturday, February 15th, 2020 at home against Wauseon, Graeme Jacoby scored his 1,000th career point on the first basket of the second half.

Jacoby entered the game needing 13 points and finished the night with 25 points bringing is career point total to 1012 at the end of the night. He becomes the ninth player in Pettisville Boys Basketball history to score over 1,000 points in their career.

Immediately following the JV game on Friday, February 21st versus Edon, Graeme was presented with the game ball from the Wauseon game by Pettisville Head Coach Brian Leppelmeier and the second all-time leading scorer at Pettisville and the last player to join the 1,000-point club, Justin Riegsecker.

For Graeme reaching the 1,000-point plateau was the realization of a lifelong dream. “It honestly means so much it has been something I have dreamed of since I have been little. My dad showed me his game ball he got when he scored his 1,000th in high school and from then on I knew it was something I wanted to do.”

“But I cannot take full credit for the award. I would have never been able to accomplish what I did without my family, friends, Coach Leppelmeier, all the other coaches and trainers that have helped me along the way.”

“But most of all the awesome community of Pettisville that have supported me through the good and bad games I never would have been able to achieve what I did without them”, said Graeme who also is a member of the track team at Pettisville.

For Head Coach Brian Leppelmeier, who is in his fourth year as the Blackbirds head man, there are several things that he points to when explaining what makes Graeme a special player.

“What makes Graeme a special player is that first he is a great teammate. He is very encouraging to his teammates. He really cares about his team and our program.

As a freshman on the varsity team, Pettisville Senior Caleb Rychener took Graeme under his wing from day one. That display of leadership on Caleb’s part, I really believe made an impact on Graeme. This year Graeme had his opportunity to take a freshman under his wing, his younger brother Cayden”, said Leppelmeier.

“So along with his offensive and defensive presence on the floor, we will really miss his leadership and caring for this program. Graeme is very grateful for the opportunity to play this great game and I believe that is evident in the way that he plays”, added Leppelmeier.

Not only has Graeme displayed leadership but Leppelmeier also has seen tremendous growth in Graeme’s game. “Graeme’s ability to guard in the post and rebound the basketball as a freshman got his foot in the door his freshman year”, commented Leppelmeier.

“He has continued to be a solid defender and rebounder. So, his biggest area of improvement has been on the offensive end of the floor. He had to adapt to the various defenses (double teams, triple teams) and to develop scoring through a lot of contact.”

“With where he plays on the floor, in the post, that contact leads to opportunities at the free throw line. He has improved at the free throw line greatly since his freshman year when he shot 61%, his sophomore year he dropped a bit to 56% but last year he improved to 63% and is currently at 77% this season.”

Not only has Graeme had success on the court, but he’s very active when not playing basketball. Graeme is involved in FFA, FCCLA, Spanish Club, and is a Youth Leader at Tedrow United Methodist Church. He also was recently named a BBC Scholar Athlete for the winter sports season.

As was mentioned earlier Graeme’s dad is a 1,000-point scorer, but Graeme’s uncle Zac Graffice was a fine player also at Pettisville and something Graeme relishes is the support he’s received from his entire family, including Zac.

“I come from an awesome family and Zac as well as all my family members have been to every one of my games since I was a freshman and that means a lot. He’s a cool dude and gives lots of good tips and tricks and he always reminds me I may have beaten him in scoring (Zac finished his Pettisville career with 999 points) but “I can come talk to him when I shoot 70% from the floor”, elaborated Graeme.

As Graeme’s high school basketball career comes to an end, there are numerous memories that he reflects upon fondly.

“There are many moments I will remember, but one I will never forget is when we went to the District Finals. Also, I will never forget my first ever varsity game as a freshman at Fayette. Probably the last thing is the first time I got the opportunity to share the floor with my younger brother”, concluded Graeme.

Following graduation, Graeme intends to go to college, where he would like to do either track or basketball (preferably basketball) majoring in business and marketing, but at this point he’s undecided where he will be attending.

But before he finalizes his plans for after graduation, Graeme hopes he and his Pettisville teammates can put together a deep tournament run.