Gregg DeTray Takes Fifth Win Of The Year At Oakshade 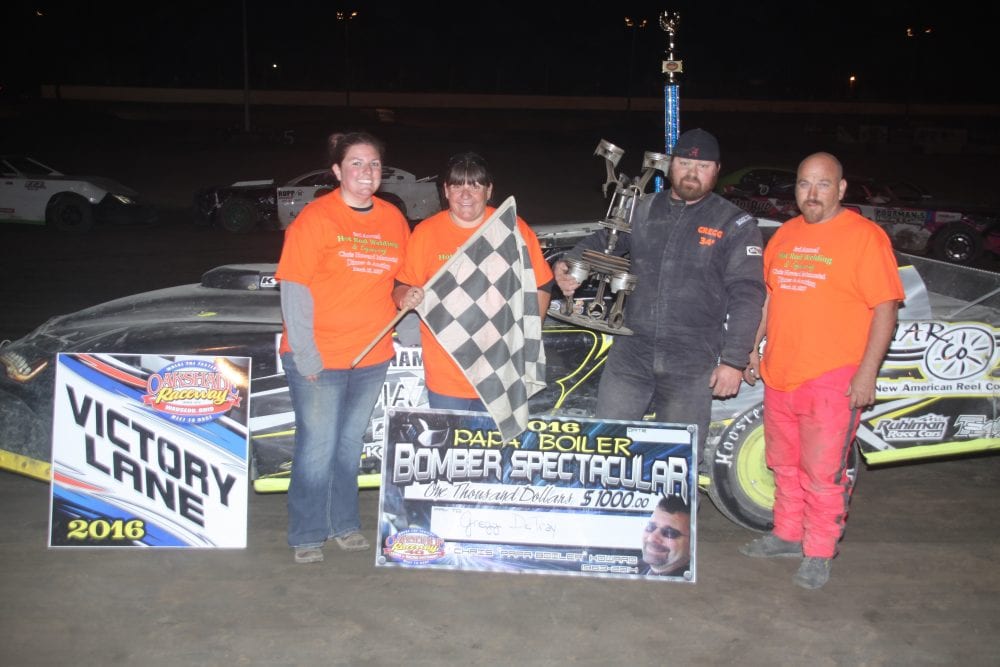 Championships were decided, $1,000 was won, candy was distributed and some race cars had no roofs on the final Saturday night racing program of the season at Oakshade Raceway. After last week’s rain out, Season Championship Night for the UMP Sportsman, Bombers and Compacts was rescheduled for to run along with Saturday night’s $1,000 to win Chris ‘Papa Boiler’ Howard Bomber Spectacular. Also rescheduled from the week before was the topless UMP Late Models and Trick or Treat night for kids making for a fun-filled night for all.

The main event of the night was the Bomber Spectacular/Season Championship feature. Jeff Foks Jr. nursed a 15 point advantage over Gregg DeTray entering the final event. Jerry Signor started on the pole of the 25-lap feature until Craig Dippman took over on lap four. DeTray and Foks worked through the top five and DeTray took the lead away on lap 17. Foks got by Dippman for second a couple laps later. A late caution tightened the field with just two laps to go. DeTray, from Swanton, Ohio, held on to win his fifth A Main of the year. Foks’ second place finish earned him his third Bomber Championship unofficially. Dippman finished third just barely edging out Tim Murphy. Tim Hancock was fifth.

Ryan Missler started on the outside of the front row of the topless UMP Late Model feature and got the early lead over pole-sitter Steve Kester. Kester regrouped and got by Missler on lap three and then pulled away. Rusty Schlenk closed in on Kester late in the race while working through lapped traffic. Schlenk was able to get to the inside of the Holland, Ohio, driver going into turn three with just a couple laps to remaining. The two drivers made contact a couple of times and both got out of shape, but were able to gather it back in. Kester came away from the contact with a slight lead coming to the white flag and eventually went on to pick up his first feature win of the year. Rob Anderzack was able to get by Schlenk to finish second. Missler wound up finishing fourth with Devin Shiels fifth.

Mike Jessen maintained a 26 point lead over George Lindsey headed into their Sportsman Season Championship feature event. Brian Fisher passed Billy Brown for the lead on lap three of the 20-lap feature. Ten laps later, Joe Smith closed in and took over the top spot. Fisher tried to battle back, but Smith held on. Fisher gave up second and retired to the pits with two laps to go. Just about the same time, Tim Fisher’s car came to a stop to bring out a late yellow and set up a two-lap race to the finish. Bob Gregory out of Swanton, Ohio, restarted second and immediately jumped to the outside. Gregory was able to power by Smith to earn his first feature win of the year. Joe Smith settled for a second place finish followed by Rusty Smith, Bruce Stuart and Billy Brown. George Lindsey managed to finish sixth, but Jessen’s ninth place finish was enough to unofficially claim the 2016 Sportsman Championship.

Richard Riffe’s seven Sport Compact feature wins earlier in the season were all he needed to have the championship wrapped up before the night’s competition began. Cory Gumm snatched the early lead in the Season Championship feature after starting on the pole. Waldron, Michigan’s Brogan Rehklau got to the inside of Gumm on lap two to take the lead and went on to pick up his third feature win of the year. Gumm finished second with the unofficial 2016 champion, Richard Riffe, third. Matt Brazeau and Jeff Foks Sr. were the rest of the top five finishers.

Josh Proffitt got by Chris Leonard on lap three for the lead en route to the Sport Compact B Main win. Leonard ended up second followed by Nathan Goodman, Hailey Hottenstein and Jason Deshler.

A couple of make up B Main events from July 30th were also run. First was the make up Compact B Main in which Aaron Van Pelt led the first part, but Matt Brazeau tracked him down and was able to get by for the win. Van Pelt settled for a second place finish followed by Jason Deshler, Cole Walbolt and Kenny Wats.

Dave McMannamy led the first lap of the make up Bomber B Main until Jarrett Rendel from Clayton, Michigan, passed him on the inside on lap two. Rendel pulled way to pick up the easy win. Jeff Warnick got by McMannamy to finish second. Rob Price and Brian Barden were the rest of the top five finishers.