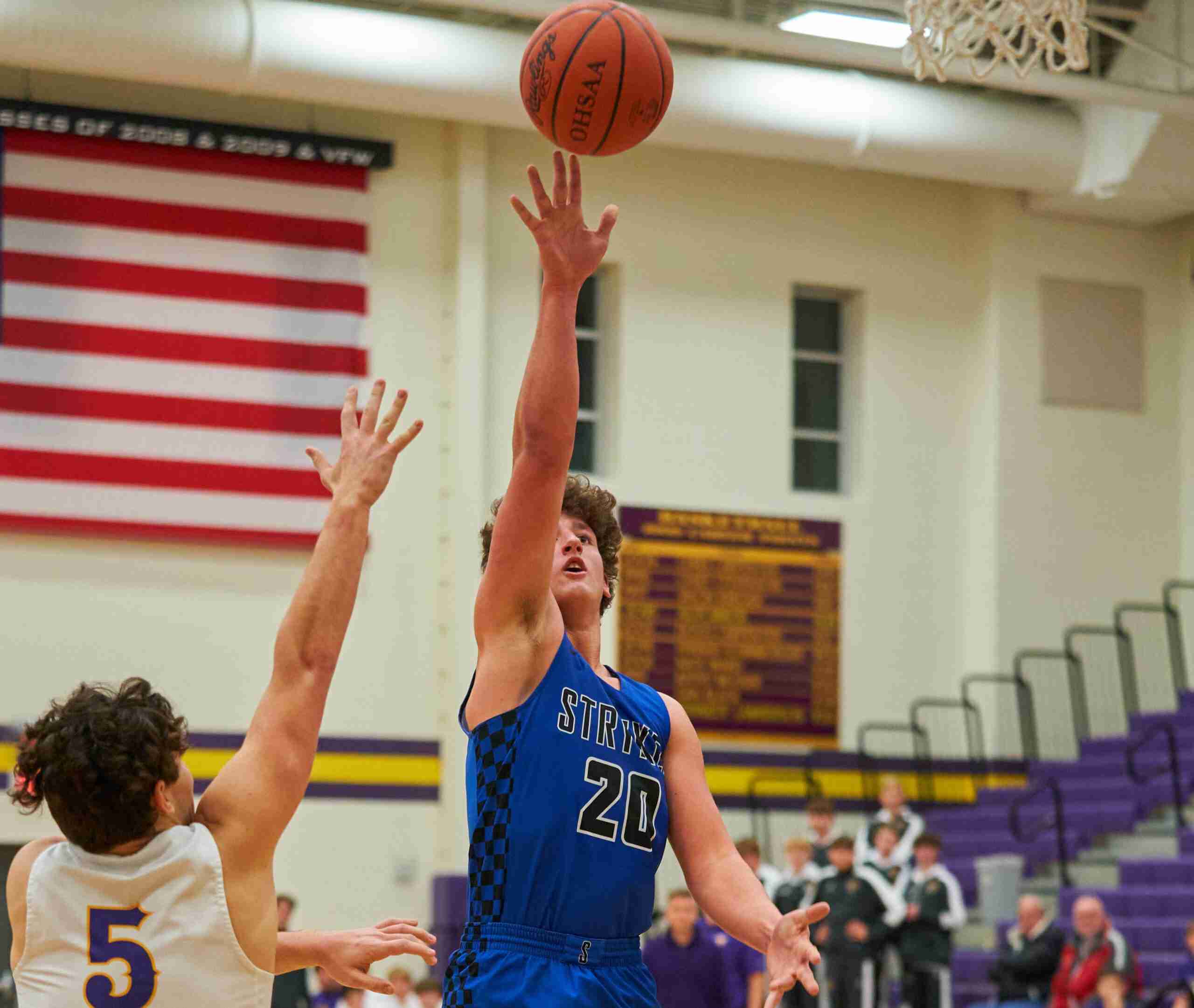 COMEBACK WIN … Levi Barnum puts up a floater in the lane during a second half that saw Stryker outscore Bryan 29-4 to rally for the win. (PHOTO BY RICH HARDING, STAFF)

TONTOGANY – Swanton upped their record to 4-0 getting a 55-36 road win over the Knights. No stats were reported.

FAYETTE – Elijah Lerma poured in a game-high 23 points to help Fayette (3-0 stay perfect on the year. Lerma was joined in double figures by Kaden Frenn with 12 and Skylar Lester had five field goals for 10. Montpelier (1-3) was paced by Garret Walz with 10.

BRYAN – In a tale of two halves, Bryan led 25-10 at halftime but the Panthers (2-3) used a 29-4 second half to rally for the win. Jacob Cadwell led the second half charge with 13 points in the half and led all scorers with 19 on the night. Carter Brown paced Bryan (0-5) with 14 points, all coming in the first half.

HICKSVILLE – Bryan dominated the second and third quarter and outscored Hicksville 34-6 to full away for their sixth straight win. Resse Grothaus topped the Golden Bears with 14 points and addie Arnold added 11.

WAUSEON – Wauseon (4-0) started fast with four three-pointers in the first quarter and finished with eight on the night as they rolled to a nonconference win over Delta (2-5) 68-41. Wauseon’s scoring was led by 21 points from Marisa Seiler and Kadence Carroll hit four shots from long range and finished with 17 points. Delta was fronted by Alani Haas with 12 points.

ANTWERP – The Lady Archers owned a 15-2 advantage at the free throw line in a 43-32 win over North Central. Madison Brown and Kendal Bonney led the Eagles (4-4) in scoring with 10 points each.

EDGERTON – Eleven different players reached the scoring column for Liberty Center in a 45-13 win at Edgerton. Dominique Fort had a triple and two free throws for five points to lead Edgerton, who falls to 1-6 on the season.