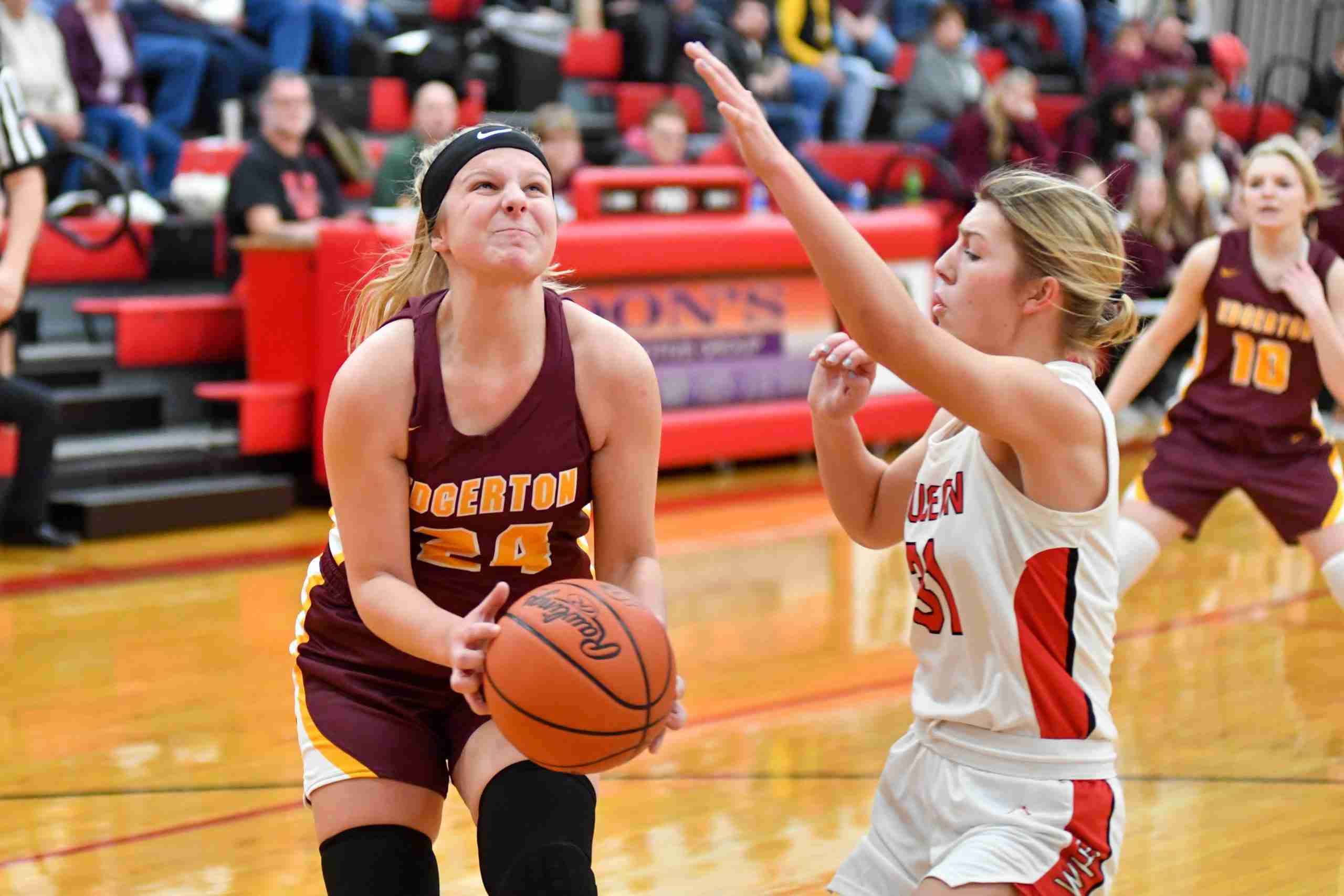 NONCONFERENCE CONTEST … Grace Schroeder gets ready to go up for shot for Edgerton while Wauseon’s Kadence Carroll looks to defend. (PHOTO BY JACOB KESSLER, STAFF)

WAUSEON – Wauseon hit six triples in the first half and had five players in double figures as they moved to 2-0 with a 77-47 win over Edgerton. Marisa Seiler tallied a game-high 24 points, Autumn Pelok and Ellie Rodriguez each had 12 while Kadence Carroll and Hayley Meyer registered 10 points apiece for Wauseon.

Taylor Smith connected on five shots from long distance for a team-high 15 points for Edgerton (0-4) and Noelle Ritter added 12.

MONTPELIER – The Locos dominated from the opening tip by taking a 22-7 lead after one quarter and rolling to a 61-11 victory over the Eagles. Ariel Page paced Montpelier (3-0) with 17 points and Trinity Richmire added 10. Jada Reinking led the Fayette (0-3) effort with five points.

BRYAN – Bryan raced to a 33-12 at halftime and outscored the Raiders 22-10 in the third quarter to put the game away as they dealt Wayne Trace their first loss of the season. Kailee Thiel had eight field goals and a free throw to total a game-high 17 points while Reese Grothaus and Addie Arnold each had 10 points.

SHERWOOD – The Lady Streaks dropped to 2-2 on the season after falling 35-26 at Fairview. Addi Ziegler fronted Archbold with six points while Harley Phillips and Karsyn Hostetler had five each.

PETTISVILLE – Ayersville shot 46% from the floor and outrebounded Pettisville 29-17 to earn a 53-28 win at The Birdcage. Leah Beck topped Pettisville (1-3) with eight points and Neva Sheets dropped 22 points for Ayersville (3-0) to lead all scorers.

TOLEDO – The Vikings record fell to 1-1 after a 66-53 loss to the Emmanuel Christian Warriors. No stats were reported.

WHITEHOUSE – Wauseon owned a 38-18 advantage on the boards but were just 5/13 at the foul line as the Generals hit a jumper at the buzzer to knock off the Indians 38-36. Jonas Tester led the scoring for Wauseon (0-1) with 14 points, Tyson Rodriguez had eight and Krue Powers pulled down 13 rebounds to go along with seven points.