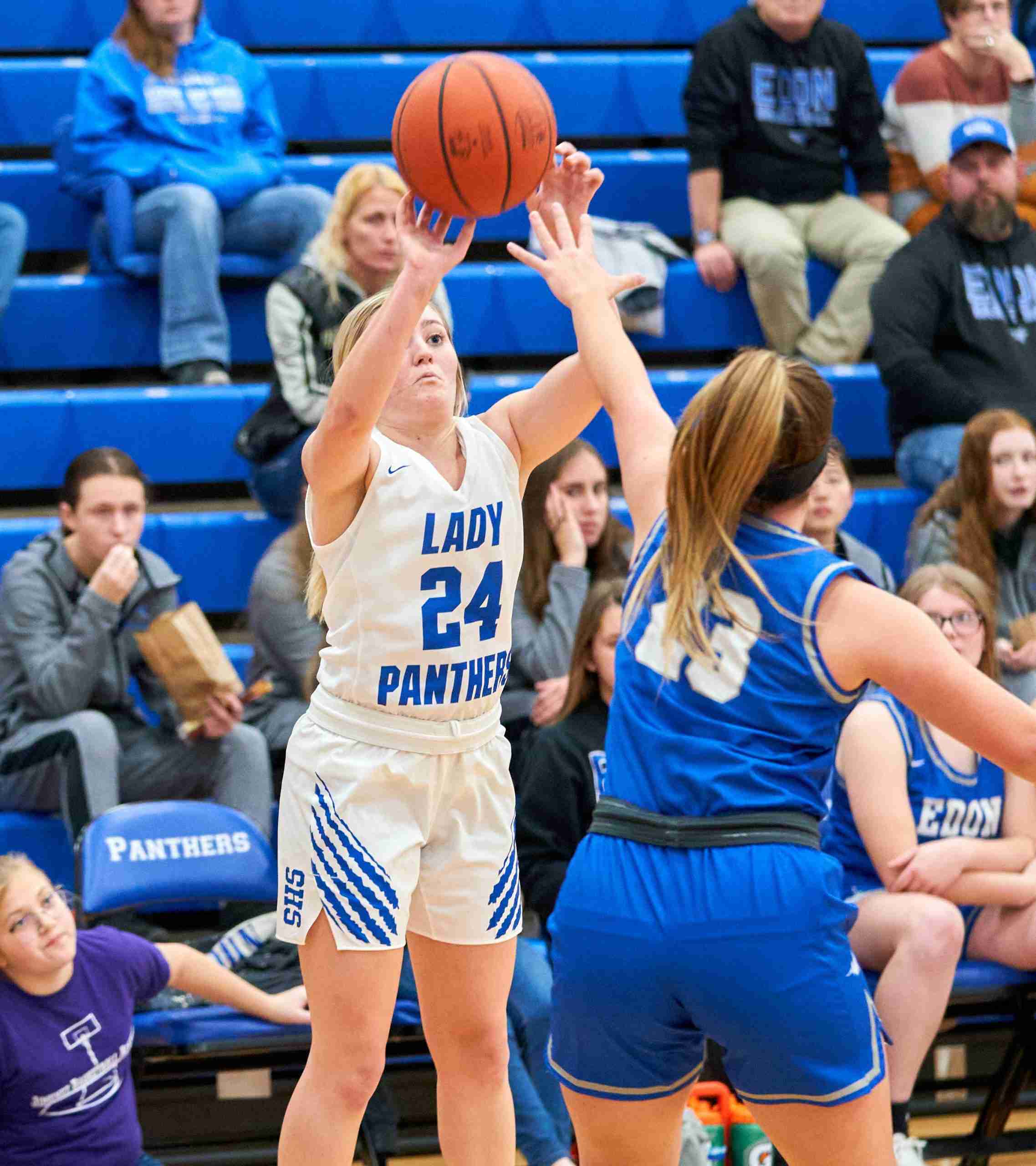 CHALLENGING THE SHOOTER … Edon’s Emma Hickman contests a three-point attempt by Stryker’s Haylee Fulk in the first quarter. Fulk would hit the go ahead triple for Stryker during their fourth quarter comeback. (PHOTO BY RICH HARDING, STAFF)

The final quarter was a different story though as Woolace scored eight of her game-high 12 points and was the defensive catalyst for Stryker in their 35-31 come from behind win.

Edon had momentum on their side as they began the quarter with a 28-20 lead, their largest of the night.

Stryker’s (3-0) rally started with Emmalee Fulk going 1/2 at the free throw line, Alexia Wickerham drilled a three and Woolace would get her first basket of the night to trim the deficit to 28-26.

The Panthers went to a full court press in the fourth which resulted in five Edon turnovers in the quarter.

After a pair of Edon free throws pushed their lead back to four points at 30-26, a three-point play by Woolace made it a 30-29 game.

Woolace missed the free throw to complete the three-point play to keep the scored tied at 31.

Following an empty possession by Edon, Woolace would drive and kick it out to Haylee Fulk who drained a three from the top of the key to give Stryker a 34-31 lead with 47 seconds left.

The Bombers pushed the ball up the floor and Emma Hickman would get an open look at a triple from the right wing, but it was off the mark.

Edon would get one more chance to tie the game after an 0/2 trip to the foul line by the Panthers as Olivia Mitchell hoisted a three-pointer from top of the key, but it wouldn’t fall.

Hickman helped Edon get off to a good start by scoring five points in in the first quarter as the Bombers grabbed an early 10-6 lead.

The second quarter saw both teams struggle shooting the ball, but Edon was able to account for six of their 12 offensive rebounds in the game during the quarter to help them take a 16-12 lead at halftime.

The teams exchanged field goals to open the third as Edon built a 20-16 lead before Woolace was 2/2 at the line and Emmalee Fulk had a bucket to tie the game 20-20 and forcing an Edon timeout.

Out of the timeout, Bombers (0-4) closed the third quarter on an 8-0 run ending with a Carlie Kiess triple off another Edon offensive rebound to take 28-20 lead to the final stanza.