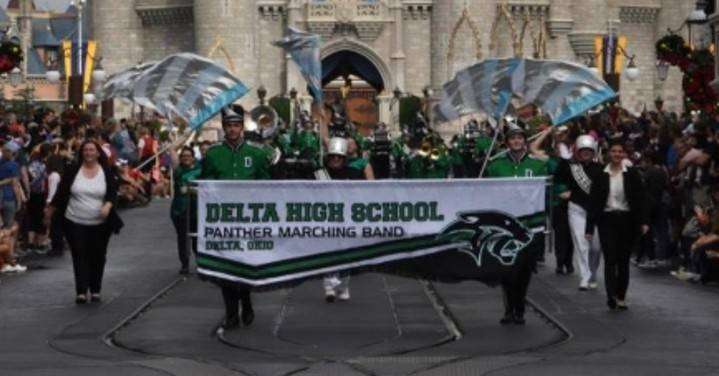 The day after Christmas, while most of us were still trying to recover from Santa’s visit by picking up scraps of wrapping paper, searching for enough left-over ham to make an omelet or, more likely, dragging our exhausted selves back to work, marching band and choir students from Delta High School were boarding a charter bus headed for Orlando, Florida and Disney’s Magic Kingdom.

There they would be entertaining some of the last few thousand of the reported 21 million guests who visited the “Most Magical Place on Earth” in 2019 with their musical talents and, at the same time enjoying one of the best experiences of their young lives.

“I had so much fun and it was definitely a great experience to be there and see it all,” said senior clarinet player Skylar Buck. “It was really tiring because Ms. Bostwick likes to keep us tired so we don’t get into trouble, but I had lots of fun.”

Of course, the 20-hour bus trip and the 16-hour a day schedule were band director Amy Bostwick’s and choir director Alexandria Lacey’s biggest allies in maintaining discipline as well as the 15 parent chaperones. The band only spent about 15 minutes marching for the crowds but found it extremely enjoyable.

“I think marching through the park was the most amazing thing ever,” remarked senior Lily Strong who plays the trumpet and plans to study music at the University of Toledo next fall. “All the parks were amazing,” said bassoon player junior Isaac Summers who like many of his fellow students, had never been to Disney before. “And being in the front and being able to see everybody and wave at people you would never see if you never went there, it was a whole ‘nother experience.”

Obviously, a trip of that magnitude is very costly, approximately $935 per individual in this case, which required major fund-raising efforts beginning in February. “As soon as we asked the kids to commit and put their $100 down, we started raising money,” explained Ms. Bostwick.

“That all went through the Music Boosters and they scheduled all sorts of things. They went month by month and every month had a fund raiser. We did two beef raffles. Those were very big.” Ms. Bostwick also said she was very thankful for members of the Delta community that donated cash to the trip so the students would have enough money to eat on the way home.

For the band members, the highlight of the trip was the unique experience spent in a workshop with a Disney conductor. It was a three-hour session that started a 6:30 a.m. on their third day. “It was very cool,” said Ms. Bostwick.

“They ran us through three hours of rehearsals with different songs and different approaches to the songs. We had headsets so we could hear the click-tracks to make sure we stayed on tempo and then they mastered it to some of the scenes from (Disney animated film) Moana. So, you’re seeing scenes from Moana but it’s the Delta band playing.”

She went on to explain just how much the studio session meant to the students. “Disney has a way of treating the students like they’re rock stars,” said Ms. Bostwick. “They walk out of there with their heads held high from the parade and the outdoor performance that the choir did and the workshop. They make them feel like they are in an elite group now because you are someone that has done this with Disney.”

The Delta High School marching band and choir goes on these long trips just every four years and the last few have been to Disney World. Ms. Bostwick highly recommends the Disney experience to all her fellow band directors.