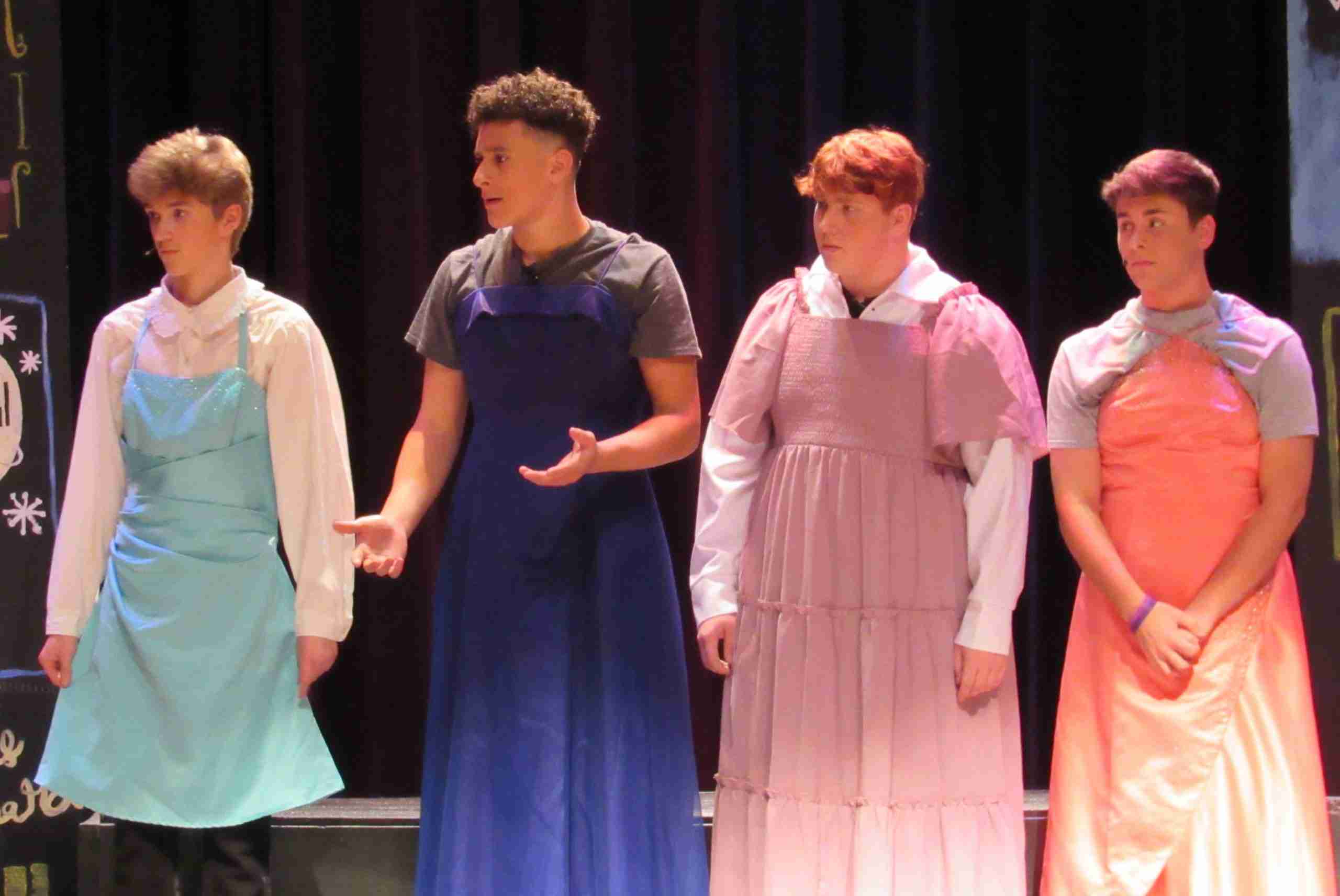 Students with a high level of arts involvement are less likely to drop out. Creative Drama enhances fluent and flexible thinking in young students.

Training in acting classes improves language and memory skills. High school students engaged in actor training develop a higher level of empathy, a heightened understanding of what others are thinking and feeling, and are better able to control their own positive and negative emotions.

Here’s a comedy that covers nearly every angle of the typical high school play with a dose of history and improvisation thrown in for good measure.

A group of actors, whose drama teacher has apparently abandoned, have to fend for themselves opening night in front of a live audience. Their teacher has left them hanging because no one has been showing up to rehearsals, and no one is really quite sure what they are supposed to do.

The student assistant director and the stage manager step in, find a box of scripts, pass them out to the cast, and try to throw something together as fast as they can.

What follows is a fantastic show full of comedy, gags, and satirical re-writings of many plays.

There is an opening scene to let the audience know what is really going on. The assistant director, played by Elijah Kuszmaul, and stage manager, played by Keely Burdine, are trying to figure out what they can do to keep the show going.

So they throw the box of scripts on the stage floor and tell all the actors to grab one and start learning it. Throughout the entire play, nothing is quite as it should be.

In the history of theatre scene, Greece is mistaken for the musical “Grease,” freshman Conner Sanders comes out in a skirt to show that males played many female parts, and Conner gets “killed” a couple of times in that scene by Marissa Bennett.

he next scene is a Questions from the audience and Improv Game. There was some audience participation during this part of the play.

Sophmore Aiden Terrill then recited “To Be, or Not to Be: That Is the Digression. All while someone in the sound booth inserted a noise to match the words he was saying. Scene 5 was Christopher Marlowe: The Elizabethan True Hollywood Story.

In this scene, sophomore David Rodriguez comes out as William Shakespeare and stabs Marlowe, played by Dylan Siebenaler, with a rubber chicken. Kristopher Hansen, Marissa Bennett, Conner Sanders, and Brooke Moreland do “Melodramas in 90 seconds.” We then see Aiden Terrill, David Rodriguez, Dylan Siebenaler, and Conner Sanders in dresses as they portray “Little Women” because the girls do not want to do it. This scene is called “Little Men and Surrealism.”

Then there is an intermission for about 10 minutes so they could “get the boys out of the tight dresses.”

They do a “Christmas Carol Rap” where Dylan Siebenaler comes out as Tiny Tim, the ukulele player, instead of Tiny Tim from Dickens “A Christmas Carol.”

“Our Town, This Town” was performed by Anabelle Soltau and Kristopher Hansen. a song/poem about West Unity.

Tom Jones then ran across the stage, and it was time to watch

“Romeo and Juliet: A Puppet Show. The cast made “puppets” where they cut out pictures of celebrities to attach to a stick and hold up when it was time for that character in the play to talk. Britney Spears was Juliet, and Justin Timberlake was Romeo.

“Scene Work” was next. This included: Loren Rodriguez, Allison McKinney, Kristopher Hansen, and Annabelle Soltau. They used props to act out scenes from famous plays, but they could not use the play’s name or characters due to copyright issues.

During this entire play, the stage manager and the assistant director come out, talking and trying to figure everything out.

The last scene, “The Drama Teacher Cometh,” is where we find out the truth. The director, Morgan Pendleton, whom everyone thinks left them for not showing up to rehearsals, has been locked in Elijah Kuszmaul’s trunk the whole time. He wanted more “artistic control.” He was then tased by a rubber chicken and drug off stage.

All of you should be very proud of yourselves. You worked very hard, and it showed. Maybe next year, there will be a “sequel.” 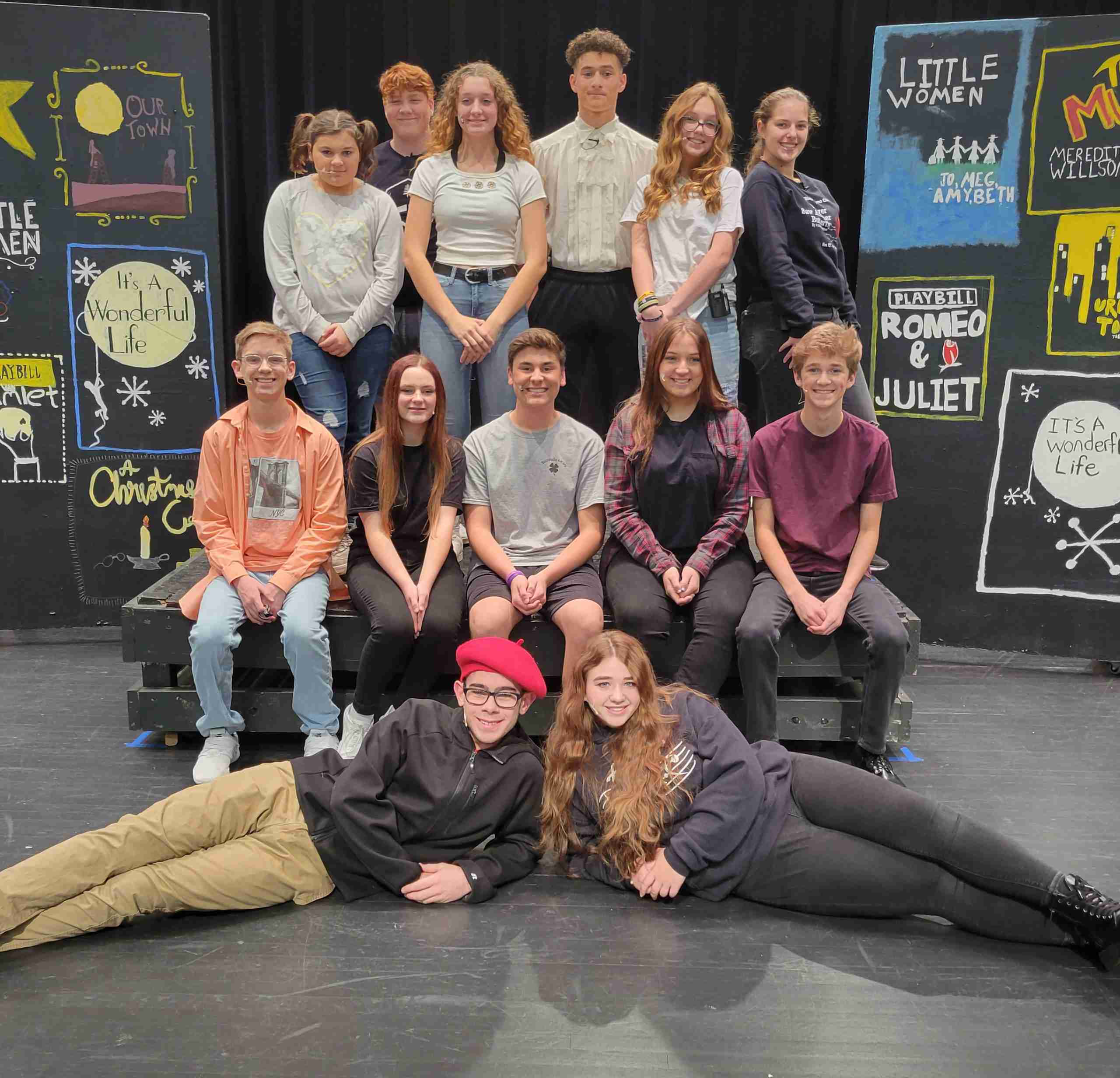 JUST ANOTHER HIGH SCHOOL PLAY … The entire cast and crew of the production.