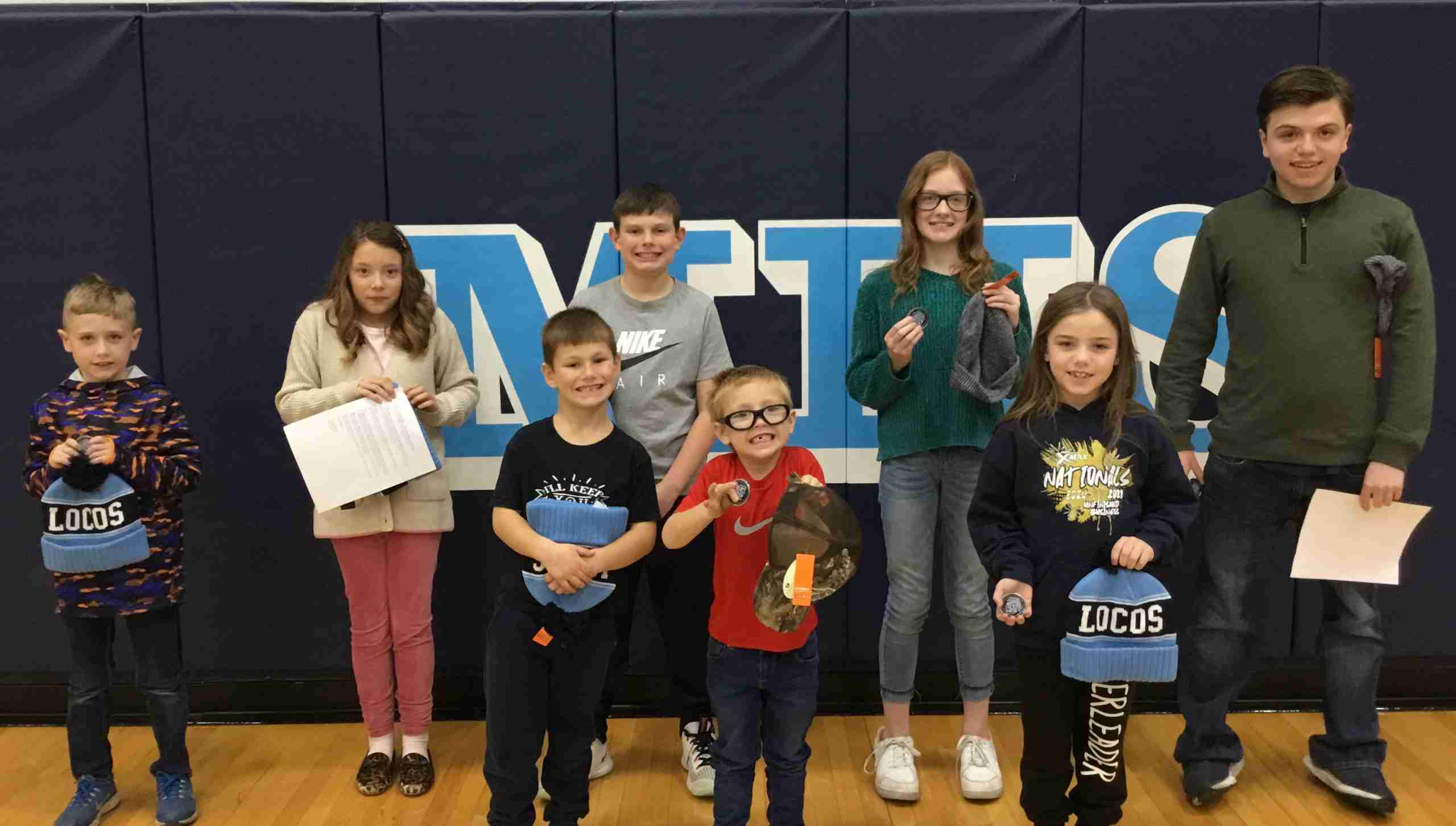 STUDENT RECOGNITION … With high praises and thanks from their teachers for their classroom and school behavior, these students happily accepted gifts and applause at the Tuesday evening, November 16, 2021 Montpelier Board of Education meeting. In the back row, left to right are Second Grade – Michael Prasser, Third Grade – Maci Thomas, Fifth Grade – Braxton Henry, Sixth Grade – Caddisy Chamberlin, and High School Freshman – Ryder Brown. In the front row are Kindergarteners Brantley Hammill and Noah Cromie and First Grade – Alexx Belcher. Not Present to accept their awards were First Grade – Stephen West, Fourth Grade – Brycen Champada, Seventh Grade – Kensie Hall and Eighth Grade – Mallory Hornung. Mrs. Friend read them all whether they were present or not. (PHOTO BY REBECCA MILLER, STAFF)

Student recognition was the highlight of the half hour Montpelier School Board meeting on November 16, 2021. Board member Kim Friend read teachers’ praises for students while

Superintendent Jamison Grime gave them a Loco spinner and let them choose a Loco hat.

Twelve students from Kindergarten through seventh grade were recognized before a room full of parents and others. All but four were present to receive the kudos from their teachers.

In his legislative report, Board member Shawn Owen informed the Board of the following that “Ohio Senate passed SB229 on October 20, 2021 by a vote of 30-0.

The bill went through significant changes in the Senate Primary and Secondary Education Committee before the Ohio Senate vote.

The changes largely address the need to provide schools with legal alternatives to maintain educational instruction to students who are quarantined.

It would: Temporarily extend the deadline to April 30, 2022 for a school district to submit a blended learning model to the ODE for the 21-22 school year; permit a school district to adopt a resolution that provides remote learning to a student whose parent requests remote learning; and require a district that operates an online learning school to allow a quarantined student in a traditional district school to participate in that online learning school during the period of quarantine.”

Owen said that he is still monitoring House Bill 290, the Backpack Bill, but did not have any updated information on it.

JH/High School Principal Su Thorp reported that Maumee Valley came to the school and presented two different assemblies on Suicide Prevention, one for 6-8 and one for 9-12.

She said that this is an important topic, “as it has affected not only our own student population in the past, but districts in the area as well. Hopefully our students benefited from the information that was presented.”

Parent/Teacher conferences were held in person with a few parents still using conference call or Zoom as they were given the option. There was great feedback and attendance.

On Monday, October 25, a Choir Only Concert was held and a “wonderful Veteran’s Day Program and preview show with the Jazz Band and Locomotion were given on November 11.” She commended the new members of the Music Department, Mr. Gee and Mrs. Kirkum for a job well done.

On November 5th the HS PBIS team put on a fun filled afternoon for the 4 Houses 9-12 grades. November 10 was a Blood Drive that brought in 27 units for the Red Cross Scholarship that is given each year.

Miller’s New Market presented the High School with a donation check of close to $900 for Pump up the Spirit at the station, as part of every gallon sold on a certain pump was donated back to the school.

Upcoming events include November 24-18 Thanksgiving Break; December 2 – Sophomores will be touring at Four County Career Center; Week of December 6 will hold End of Course retake exams; December 22 – January 3 is Christmas Break; and January 11 will hold the Local Spelling Bee in the auditeria.

In the Elementary Principal’s Report, Lance Thorp informed the board that a number of successful events were held since the last board meeting.

Those included: The 3-8 grade school fundraiser finished up on Monday, November 1, with all items set to be delivered some time the week of November 29; P/T conferences were held on October 21 with attendance numbers down this year, but “the conversations that did take place were beneficial.”; Elementary Quiz Bowl students competed in the County Quiz Bowl on November 26, winning one and losing two, but he felt they did a nice job representing the school; 3-6 grade Grandparents’ Day took place on Tuesday, November 9, and featured the 5th grade musical which then performed again that night; Blood Drive on November 10 – each unit is capable of helping 3 people so 81 lives will potentially be helped.

– 4th Grade Gifted Testing is taking place, which helps place students in the Horizon’s program. “In general, only students landing in the 95th percentile and above across the nation are admitted,” he explained. Their school always has at least a few and have had up to nine one year.

-Thanksgiving Break November 24 through 28 this year

-Fall Third Grade OST results will be available to school administrators on Monday, November 13. “We will need to see the numbers before we figure out a way to address students that were unable to pass,” he said. Treasurer Carla Rice told the Board that Income Tax Settlement was received the end of October and it increased 5% over last year the same quarter. The collection is on track to be 6% higher than projected on the five year forecast. In regular business, the Board voted to approve:

-A Then and Now purchase order to Woolace Electric in the amount of $9,411.10

-Khrysta Coleman, Allison Damron and Jodi Grime as Tutors at $21 per hour for 21-22 school year

-Add TaSondra Harrington to the Substitute Cafeteria list for 21-22

-Approve Shannon DeWulf as a Paraprofessional as needed, paid by time sheet, no more than 9 hours per week, beginning November 8, 2021, pending all requirements are met.

-Approve Courtney Bice as a 3 hour per day bus driver, effective November 22, and add her to the Substitute Lists for Aides, Cafeteria and Secretary for 21-22

-Approve Jamie Motter as a 3 hour bus driver effective November 22 and add to the Substitute Lists for Aide, Cafeteria and Custodian for 21-22

With no further business and no need for an Executive Session, the Board voted to adjourn at 5:58 p.m.