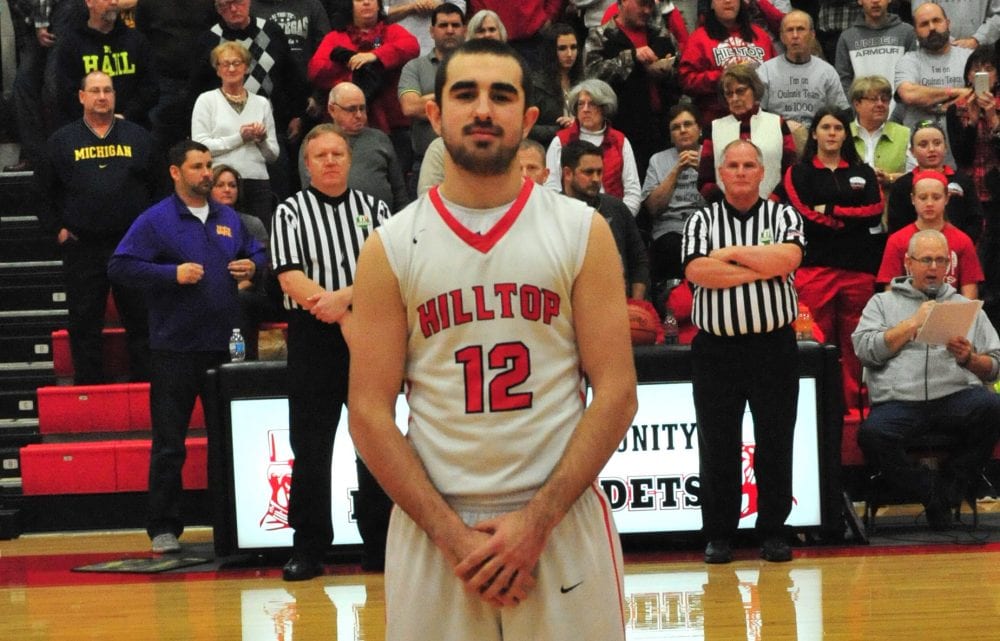 Although New Year’s Day was observed on January 1, the Happy New Year celebration for Hilltop Senior Quinn Smith continued into Tuesday, January 3, 2017. On that day Smith became just the second boy, and 7th student-athlete overall, in the history of Hilltop High School to accumulate 1000 points in a basketball career. The milestone event occurred during the third quarter of the Cadets basketball game at Maumee Valley Country Day School. The party resumed on Thursday, January 5, when with 4:47 left in the contest at North Central Smith, calmly sank a free throw to become the Cadets all-time leading scorer, surpassing Erik Belcher with point number 1021.

The momentous achievements are ones that Smith has had on his mind for quite a while. When asked what the accomplishments mean to him Smith explained, “It means that my hard work has paid off and that some of my goals that I set for myself have been achieved. Going into this season I wanted to score a 1,000 points. I also wanted to be the all-time leading scorer for boys in school history. There is one individual goal that Smith hopes to attain yet this season. “I want to be BBC Player of the Year as well.” However, it’s not just personal goals that are on Smith’s mind. More important are the team goals. “We want to win the BBC title out-right and not share it with anyone! I hope to have a record of 18-4 or better this season, to win a Sectional Title and at least make it to a District Final game.”

A young man with all these goals leads to the question of where the intense motivation comes from. Smith gives the credit where it is most deserved. “My family motivates me (Father Mike, mother Abbie, and older siblings Nick and Jackie), they all went to Hilltop, and played athletics. My family is very competitive and that has pushed me a lot in developing my game and making it better throughout the years.”

Quinn points to one family member in particular that has been the largest factor in his strive for excellence. “The biggest influence in my life would have to be my older brother Nick. He is 7 years older than me. I watched him grow up and play all of his games. I saw his teams struggle, but also have success at times. I knew that I wanted to be like him in almost every way. He has taught me so much both on the court and off. We have played each other so many times in one-on-one and sadly he may have more wins all-time against me, but lately I have been winning.” 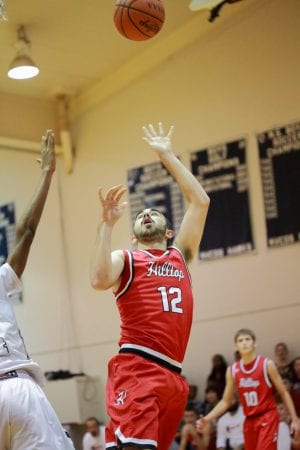 When asked to provide one word that best describes himself Quinn summed it up quite simply. “Worker, I don’t miss school or practice. That is because those are times where the work needs to be put in, to become the best at whatever it is a person does. Whether that be a basketball player, a baseball or football player, or even just a good student. A person needs to show up day in and day out and put work in to be the best.” The work ethic has been a huge factor in his accumulation of 12 varsity letters during his high school career.

Head Basketball Coach Sam Boehnlein echoed Smith’s self-evaluation. “Quinn is a hard worker and believes in his ability. He has been blessed with a lot of talent and has worked hard to develop that talent to become a better player in all three sports that he participates in.

I’ve gotten to know Quinn a lot more by having many conversations with him this season. He is very confident, and has a tremendous belief in himself. We’ve been able to keep our coach-player relationship positive by talking to each other and comparing between what I want from him and what he sees on the court and thinks he can do. He is not afraid to be the one with the ball in his hands at the end of a close game; he is willing to be in the role of being the primary playmaker for us. Another reason Quinn is successful is because he wants to know why he is supposed to do certain things on the court; he wants to know the purpose for his actions in order to achieve what our coaching staff wants.”

Smith also takes great pride in being an example for his teammates, classmates, and even the younger students at Hilltop to follow. “I try to never miss practice or school. Skipping either one of these is a big no-no for me. A teammate and classmate must be so devoted to the team or project in school terms that they do not allow themselves to miss a day. I do not miss. I also try to self-discipline myself and do the right thing even though no one maybe watching me. A good person does the right thing even if there is no praise for doing so.” Smith also understands the responsibility he has to be a role model for the younger Hilltop students who look up to him. “I want them to understand that I was not just the quarterback, or really good at basketball and baseball. I hope they remember that I was a leader off the court and a very good student. Sports will only take a person so far but knowledge can take a person way farther in life.”

Quinn’s excellence has not been limited to his athletic endeavors. On the contrary, he has achieved at an admirable level in the classroom. Currently Smith has a grade point average near 3.9. He is also a member of the National Honor Society and participates in the chorus. Additionally Quinn is getting a head start on college by taking courses through Northwest State Community College where he earned placement on the Dean’s List for this past semester.

Smith’s depiction of himself is authenticated by Hilltop Athletic Director and Head Baseball Coach, Tony Gerig. “Quinn is a near 4.0 student, has always been a model student who is willing to help others. He is dedicated to the activities that he is involved with. He has a lot of God given ability, no question, but he has worked very hard to earn his achievements. He’s the type of person that every school, team, and community loves to have. Kids gravitate toward him. He communicates constantly to his teammates in all the sports that he plays.

Those characteristics could put off some teammates, but to the guys around Quinn it has gotten to the point where it seems like they depend on his communication and leadership on the playing fields. Without a doubt our younger students look up to him and follow him. It wasn’t that long ago that Quinn was that same age as a manager looking up to his older brother and sister and he has followed in their footsteps very well.”

When asked what the future holds, it’s obvious Quinn has lofty, but well thought out goals for that as well. “I have already been admitted into Bowling Green State University. I am planning on majoring in Constructional Management. As for athletics, I am unsure about my plans there. I may try to walk-on to basketball or baseball but college sports are a whole other animal and require so much of a person’s time. After college I hope to find a job in my field of study and come back to live around this area. I hope to marry, raise a family of two kids, and maybe someday down the road get into coaching. Probably basketball coaching but maybe baseball or football.”

Showing his humility and appreciation, Smith wanted to make sure and acknowledge the Hilltop faithful. “I want to extend a huge thank you to the fans that made the trip to Maumee Valley to see me score the 1000 point. I realize that that is quite a drive and I would just like to thank the fans that made the trip, and for all the support they have provided over my athletic career at Hilltop.”

Gerig was excited to point out the long-term effect that Smith has had on Hilltop Athletics. “Quinn has been tremendous! It has been a pleasure to be around him all these years and it will be a sad day when his days at Hilltop are over. He is the type of kid that can carry a program. The hope is that the kids that are still here in the years to come will adopt the qualities of Quinn. If they do, I like where Hilltop’s future is going.”

It’s safe to say that the work has paid off for Smith in more ways than one, and that many other landmark achievements lie ahead for him in the days and years to come! 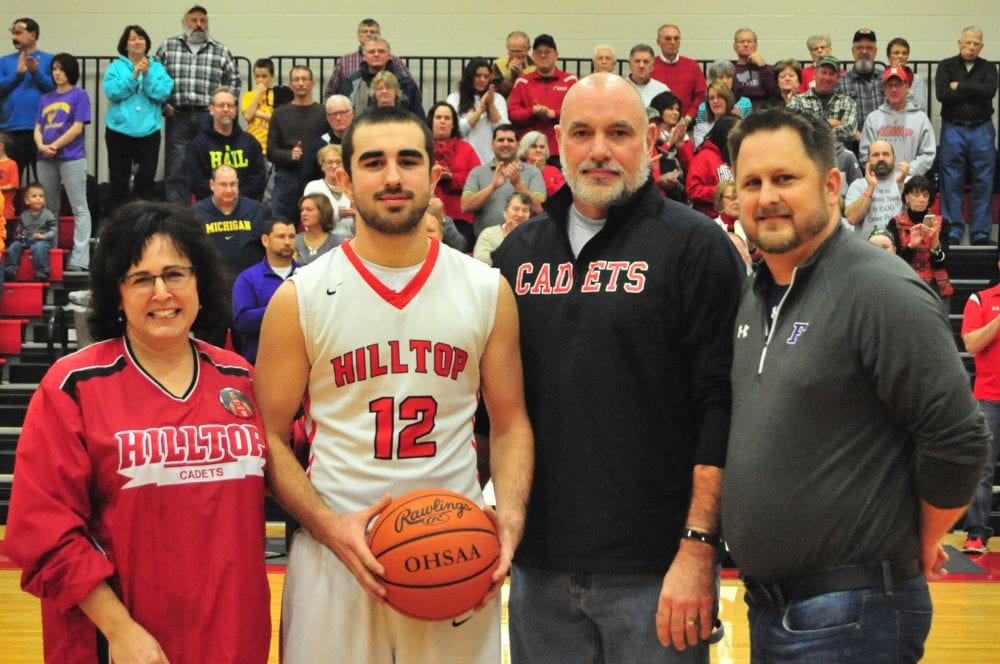