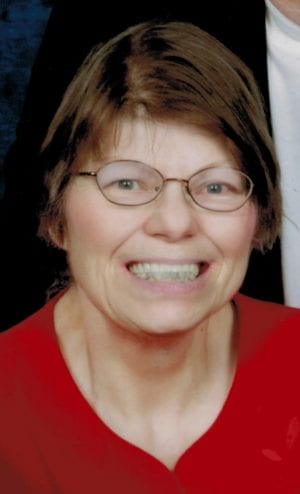 Judith Anne Wilson, age 68 of Delta, who was living in Napoleon at Northcrest Nursing Home, passed away on Tuesday, January 10, 2017 at Henry County Hospital after a brief stay. She was born on July 23, 1948 in Toledo to Gerald and Virginia (Duvall) Cedoz. She was a 1967 graduate of Rogers High School. She married Gary Maddock and together they had a son, LaMar. In 2004 she married Robert L. Wilson and he preceded her in death on February 16, 2015.

Judy was a resident trainer at Ann Grady’s Center for many years and a member of Delta Assembly of God. She enjoyed camping, flea markets, baking for the kids and dancing with her husband Robert.

Judith was preceded in death by her parents, husband, Robert, grandson Bowen Maddock and many aunts and uncles.

Friends and family will be received on Saturday, January 14, 2017 from 10:00 AM – 12:00 PM, at the Delta Assembly of God, 405 West Main Street, Delta, with a memorial service following at 12:00 Noon. Barnes Funeral Chapel, 5825 St Hwy 109 in Delta has been entrusted with arrangements. Private interment will take place at Greenlawn Cemetery at a later date.

In lieu of flowers, memorials can be made to the Delta Assembly of God in her memory. Online condolences may be sent to the family through our website at www.barnesfuneralchapel.com