Historic “Yellowstone Trail” Being Brought Back To Life 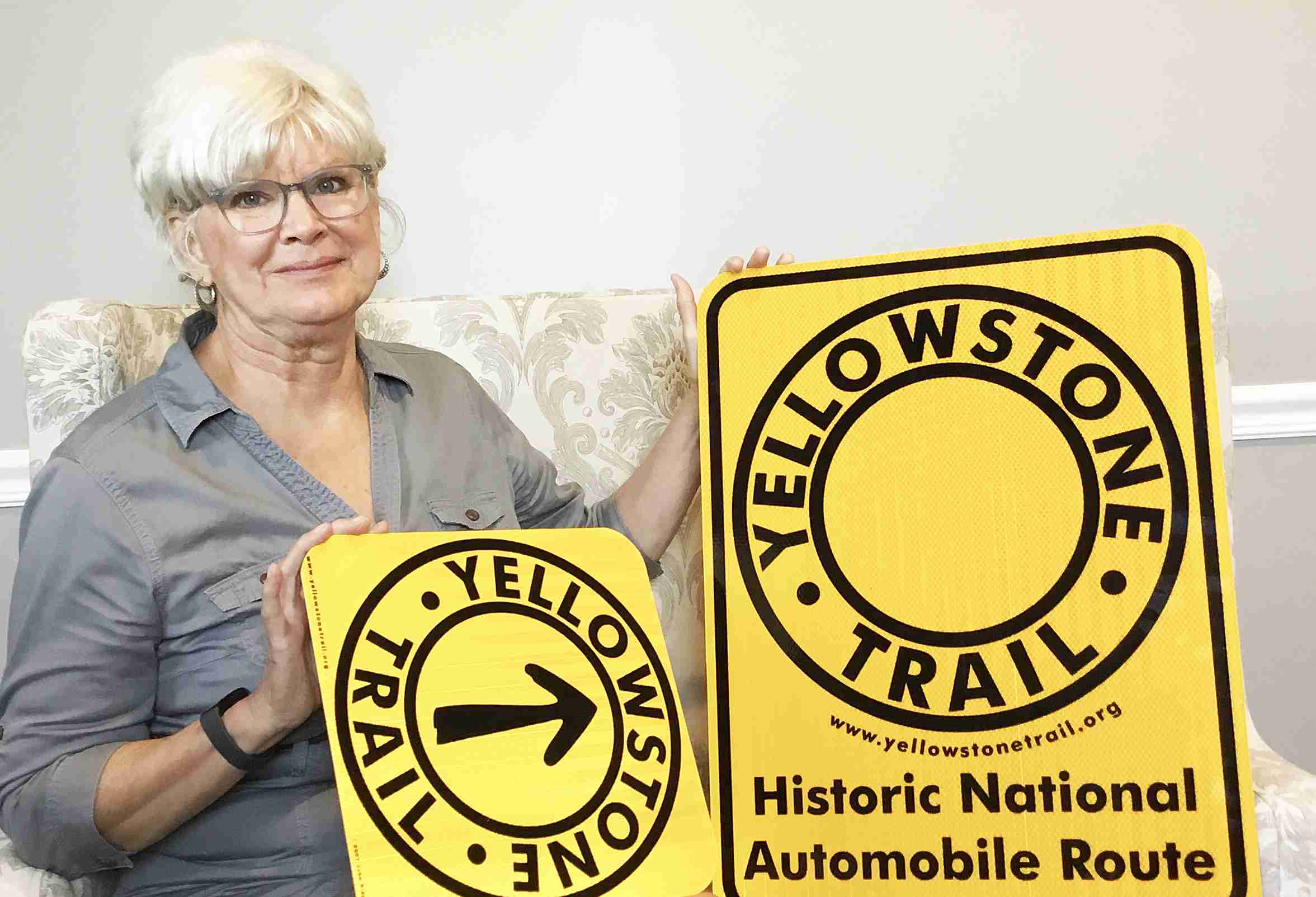 YELLOWSTONE TRAIL SIGNS … Julie Preston-Brink, Director of Fulton County, Ohio Visitors Bureau, displayed the new signs that have been purchased by FCVB for use in participating towns in Fulton County. The larger signs will be used as a marker in Swanton, Wauseon and Delta, towns that have agreed to participate, as well as in front of Sauder Village. These signs will have the arrow affixed in the center when the placing is determined. The smaller signs will help in spots along the route where travelers might need a little more direction. Brink would love to have residents along St. Rt. 2 paint a large rock out in front of their homes, as was done to help mark the trail between 1912 and 1930. She is also hopeful that other councils, historical societies or Chambers of Commerce in Fulton and Williams Counties, will choose to join in by placing a sign in their villages. (PHOTO BY REBECCA MILLER, STAFF)

From 1912 to 1930, there was a route across America for the brave and hearty new car drivers to enjoy longer trips. The purpose of the route was to find the best roads and mark them for travelers using bright yellow paint on large rocks or yellow stripes on trees.

Back then, most of the roads were terribly bumpy when dry and extremely muddy during wet seasons, so travelers were often in need of assistance. Tires did not last long with all the holes and there were not many places for roadway assistance.

The history of this route shows its lofty goal was to map out the better and safer roads from Plymouth Rock, Massachusetts to Puget Sound, Washington.

This could take folks all the way from the Atlantic to the Pacific if they chose to travel the whole route. The name was chosen as the founding members planned to have it go close to historical landmarks such as Yellowstone Park, as well as businesses to help stir up commerce.

It involved detailed descriptions for travelers, with some of the roads being highways while others were streets through towns and villages. In 1930, the Yellowstone Trail was officially ended due to a couple different reasons.

One was growing frustration between the leading members of the Yellowstone Trail Association, and the other was that routes across the country were beginning to be numbered by government.

This meant that the painted yellow rocks and trees, used to mark the Yellowstone Trail, were no longer needed, but they certainly had been a “pioneer of the highway era” as stated in a book about the trail entitled “A Good Road from Plymouth Rock to Puget Sound: A Modern Guide to Driving the Historic Yellowstone Trail 1912-1930” by John Wm. Ridge and Alice A. Ridge.

Here in NW Ohio, much of the Yellowstone Trail was marked on what is now St. Rt. 2. Local historian and present Director of the Fulton County Ohio Visitors Bureau, Julie Preston-Brink, is excited to join in the effort to wake this historical route back up for the enjoyment of travelers.

Originally the route began in South Dakota where the dream began for this marked route, making its way east and west at the same time, to connect the oceans on either side of the country.

As it moved eastward, according to Michael Buettner of Lima, Ohio, another proponent of reviving the route, “it was reportedly marked as far east as Sandusky, and as such, towns such as Hicksville, Bryan, Archbold and Wauseon were on a coast-to-coast route.”

Buettner and Preston-Brink are both hopeful that area communities along the historic route will jump on board.

Mrs. Brink is happy to say that Swanton, Delta and Wauseon have all agreed to put up the new yellow signs she has acquired for them. Sauder Village, which is located on St. Rt. 2 just north of Archbold, will also be putting one out front of the village, for the thousands of visitors they have each year to be made aware of this delightful travel route.

Julie is open to having anyone in Fulton County and Williams County, contact her for information to join in on this endeavor and says she would love to see one of the Yellowstone Trail signs put up in each of the towns that are on State Route 2 in both counties. She has contacted several entities in Williams County and is waiting to hear back from them.

In Bryan, the trail did not stick directly to State Route 2, but meandered through town, using Mulberry St. and Main St. as at the time they were in better condition.

Anyone who lives on St. Rt. 2, or one of the streets used, who might be interested in becoming a part of this Yellowstone Trail revival, can contact Julie at 419-337-9669 or juliebrink@fultoncountyoh.com.

It would be fun to paint a large stone in your front yard to assist in marking the trail. Even yellow stripes around trees were done back in the day, so that would be an option as well.

For information on the entire route, one can click on yellowstonetrail.org and find everything from its history to how to become a recent day member of this modern-day version of the Yellowstone Trail Association. The book mentioned earlier can also be ordered at this website.

History can be lots of fun and this revival of an old “long distance auto road” could be another way to assist in bringing unity to Northwest Ohio. Find out how you can be a part of this endeavor.