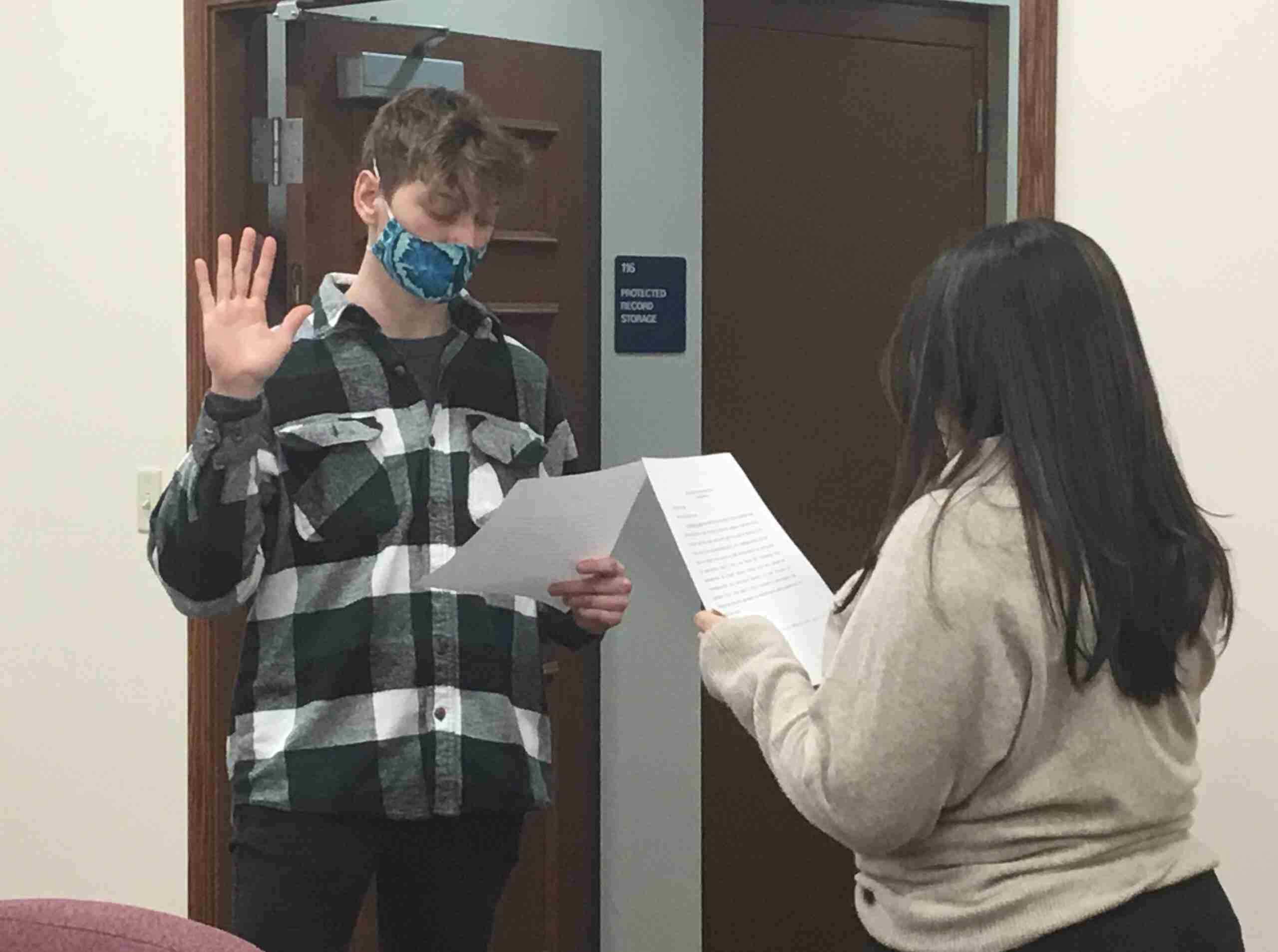 NEWEST MEMBER … Also the youngest member on council, Cooper Clark was sworn in by Holiday City solicitor Cara Wall at the January 20, 2022 meeting of Holiday City Village Council, for a four-year term. (Taking the Oath of Office to return to council were Shawn Clark, Jodie Faunce and Chelsea Funk.) (PHOTO BY REBECCA MILLER, STAFF)

Cooper Clark, an 18 year-old high school senior, joined his parents on the Holiday City Village Council, at the January 20, 2022 meeting.

He is now the youngest to ever serve on this council, as Taylor Rupp was in college during the time and that he and his father, Sean Rupp, were on council together.

Holiday City’s population, according to the 2020 Census is 47, which is down from 2010 when there were 52 people living there. Incorporated in June of 1997, this tiny village based on large industries and hotels, hit the census in 2000 at 49 people calling it home.

Ever since their beginning, it has been difficult to find enough people who are willing to serve their community as a government official.

Cooper’s mother, Pam Clark, was sworn in to continue as Mayor and his father, Shawn Clark, to continue on Council, on the evening which he found himself standing hand raised to take the oath of office.

Two other council members were sworn in that evening also. Jodie Faunce and Chelsea Funk who had been appointed to fill seats by council during 2021, ran on the November ballot and were elected to fill their seats again for this term.

The council is now made up of Shawn Clark, Cooper Clark, Jodie Faunce, Chelsea Funk and her husband Jarrett Funk. Council is looking to fill one more vacant seat.

Laurie TenEyck-Rupp, who has been serving Holiday City as the Village Clerk Treasurer since its’ inception, moved into the newly created role of Fiscal Officer in October of 2021.

During the January 20 meeting she also re-took her oath of office for her position. Her husband Sean and son Tyler are no longer able to be on council as the family has moved out of the village limits, making two empty seats on council. The move does not affect Rupp as she is an employee of the village and is not required to live within the village.

-Re-appointment of Shawn Clark as president of council

-Meeting Dates to be held, as always,

In regular business they approved:

-Ordinance 2022-1 Annual Appropriations for office expenses and other expenses
In reports and announcements, Fiscal Officer explained some details for the benefit of the new council member. She reported that the Deposits in regular checking for December 2021 was $699,112.03, Expenses were $730,801.56, and Remaining Balance was $3,887,141.19. Council voted to accept the report and approve the payment of bills.

Ms. Wall reported concerning the property that the village bought recently, that she is researching what the options are for the use of the land by the village.

Mayor Clark informed council that she attended the WC Mayors’ meeting on Wednesday, January 19 with the Mounted Patrol as the speakers.

The Port Authority will be holding its meetings on the 4th Wednesday of each month at 5:30 at WC East Annex Conference Room, the first one being January 26, 2022 and she plans to go.

Four County Career Center will be celebrating February as Career and Technical Education Month so Mayor Clark presented and signed a Proclamation to that affect for the village for February 1-18, 2022.

She also mentioned the Montpelier Police Department Recognition Banquet that will be held on January 29th and she is invited but will be unable to attend so was hoping someone else could represent the village at the banquet.

A meeting of the Records Retention committee was scheduled for next month right before the village council meeting.

In his Administrator’s Report, Gary Baker brought the council up to date on the AMP Ohio and First Energy situation in which they want to shut down electricity for a period of time in March.

Baker said the village has let them know that it is not acceptable to just turn off the electricity for ten to twelve hours, so they are working on determining how to keep the power on for Holiday City while they work on their project on County Road 16 and M, to reroute power if the need arises.

Owens Electric still has not come so he is considering looking for a different company. Bids were opened on Tuesday, January 18, for the 20/20 Power Line Project. The bid recommended was $767,791.42 from Voughn Industries.

Completion for some of the work will be 20 weeks and some will be from 48 to 52 weeks with the situation of getting supplies slowly. An Emergency Resolution was passed to accept this bid for construction.
The Bryan Municipal Report was passed around for members to look at it. Fiscal Officer requested that the Security Camera system be replaced and put online so they will have better coverage and be more secure especially in the dark when they leave the building.

Council made a motion and approved it to get the Security System replaced as the present is outdated and inefficient.

Before adjourning, Council went into Executive Session around 7:45, to consider appointment or employment, with no action taken.