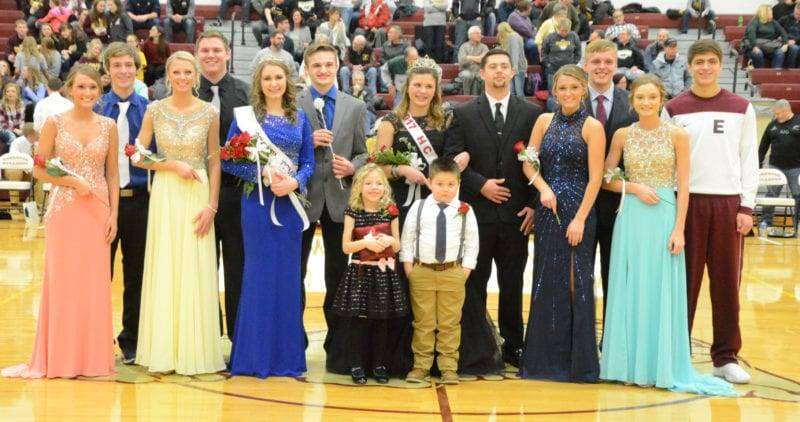 EDGERTON – On Saturday, January 12, Edgerton High School held their 2018 Winter Homecoming. The crowning ceremony was conducted immediately following the JV game with Pettisville. At that time it was announced that the student body of Edgerton High School had selected Aubree Herman and Blake Hohler as queen and king respectively.

The first Queen Candidate introduced was Aubree Herman, representing the Spanish club. Aubree is the daughter of Rick and Shanea Herman. During her high school career, Aubree has been involved in NHS, FEA, Spanish Club, Log of E, Quiz Bowl, Class officer, Student Council, Mat Maids, Softball, and Volleyball. In her spare time she enjoys shopping, watching Netflix, going out to eat and spending time with her family. After graduation Aubree plans on attending Xavier University majoring in Exercise Science.

The second Queen Candidate was Hanna Hug, who represented the Log of E. Hanna is the daughter of Chad and Jayma Hug. During Hanna’s high school career, she has been involved in FFA, FEA, NHS, Spanish Club, class officer, Cross Country, Basketball, and Track. In her spare time she enjoys watching the Office, playing with her dog, Rocky, and hanging out with her boyfriend, Tyson. After graduation Hanna plans to attend either University of St. Francis or The Ohio State University, majoring in Radiology.

The senior escort for Hanna was Tyson Curry, Boy’s Basketball representative. Tyson is the son of John and Jestine Curry. During Tyson’s high school career, he has been involved in FFA, Cross Country, Basketball and Baseball. In his spare time Tyson enjoys hanging out with his girlfriend, Hanna, play cards and video games with friends, watching Netflix, and running. After graduation Tyson plans on attending either Heidelberg or Indiana Tech University, running Cross Country and majoring in Business Sports Management.

Rachel Schroeder was the third Queen Candidate and represented the FEA. Rachel is the daughter of Gary and Mary Ann Schroeder. During Rachel’s high school career, she has been involved in FFA, FEA, class officer, Spanish Club, Log of E, Cross Country, Basketball, Track, 4-H Club officer, State 4-H fashion board, church youth group, and Junior Fair Board. In her spare time she enjoys hanging out with her boyfriend, friends, and family, watching Netflix, and going out to eat. After graduation, Rachel will be attending Rhodes State, majoring in Dental Hygiene.

The senior escort Rachel was Jeremy (Hunter) Ward who was also an FEA Representative. Hunter is the son of Rodney Ward and Carole Craven. During Hunter’s high school career he has been involved in FEA, FFA, Football, and Wrestling. In his spare time he enjoys listening to music. After graduation, Hunter plans on entering the workforce.

Rebecca’s senior escort was Drew Herman, who also represented FFA. Drew is the son of Andy and Jody Herman. During his high school career Drew has been involved in FFA, FEA, Football, Basketball, Track and 4-H. In his spare time he enjoys working at the car wash, detailing vehicles, and showing pigs. Drew plans to attend University of Northwestern Ohio, majoring in Agriculture Business and Management.

The final queen candidate introduced was Alyssa Siebenaler, Spanish Club representative. Alyssa is the daughter of Aaron and Tabitha Siebenaler. During her high school career Alyssa has been involved in NHS, FEA, Student Council, Spanish Club, Volleyball, Track, and Dance. In her spare time she enjoys spending time with her family and friends, dancing, watching movies and hanging out with her boyfriend. After graduation Alyssa is planning on attending The University of Cincinnati Blue Ash College, majoring in Dental Hygiene.

Zach Nihart was Sarah’s senior escort for the evening and represented the NHS. Zach is the son of Randy and Britte Nihart. During his high school career, Zach has been involved in FCA, FFA, NHS, Spanish Club, class officer, Football and Baseball. In his spare time Zach enjoys fishing with Logan Sack, lifting, playing with his dog Rizzo, and playing cards. After graduation, Zach plans on attending either University of St. Francis or University of Eastern Michigan, playing football and majoring in Business Administration. 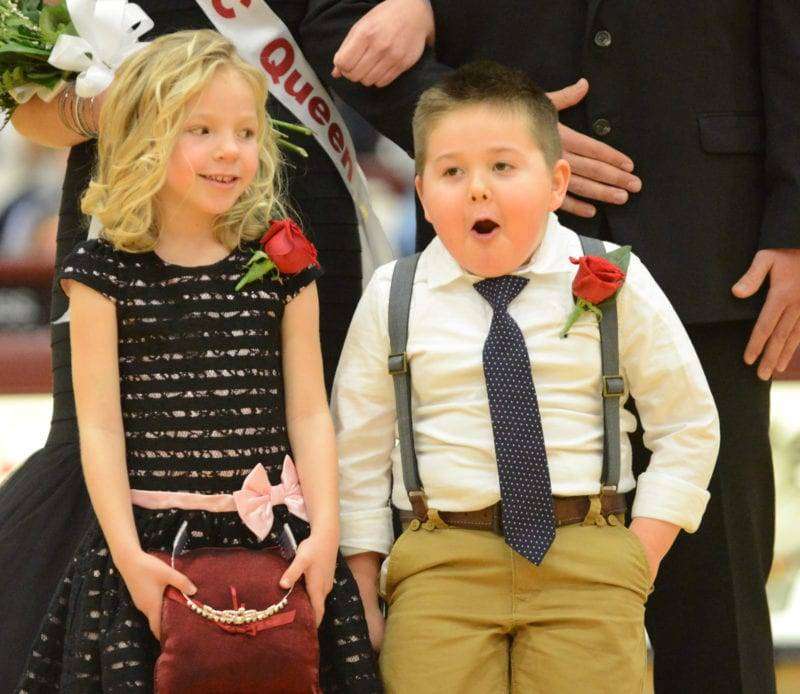 Last year’s queen and king Sarah Roth and Connor Landis entered the gym lead by Kindergarten Attendants Nora Gerschutz and Darius Mahrt. Nora is the daughter of David and Maria Gerschutz. Darius is the son of Cory and Brittany Sanders.

Following the entrance by the 2017 Queen and King, the moment arrived for the new royalty to be announced. First, Blake Hohler was named as king and received the scepter from Connor Landis. As fate would have it, Blake was then joined by the young lady he escorted into the gym as Aubree Herman was named as 2018 Homecoming Queen. Following the coronation ceremony, the varsity game commenced.

Although having just 3 victories in their first 10 games, the underdog Bulldogs battled mightily for their newly named royalty building a 17-15 lead at halftime over Pettisville who entered the contest sporting an impressive 10-1 record. However, the second half did not end as the court or the Edgerton fans had hoped. The Blackbirds battled back to down the Dogs by a final score of 43-36. All was not lost however as a dance was held immediately following the contest to help take the defeat off the minds of the Edgerton faithful.