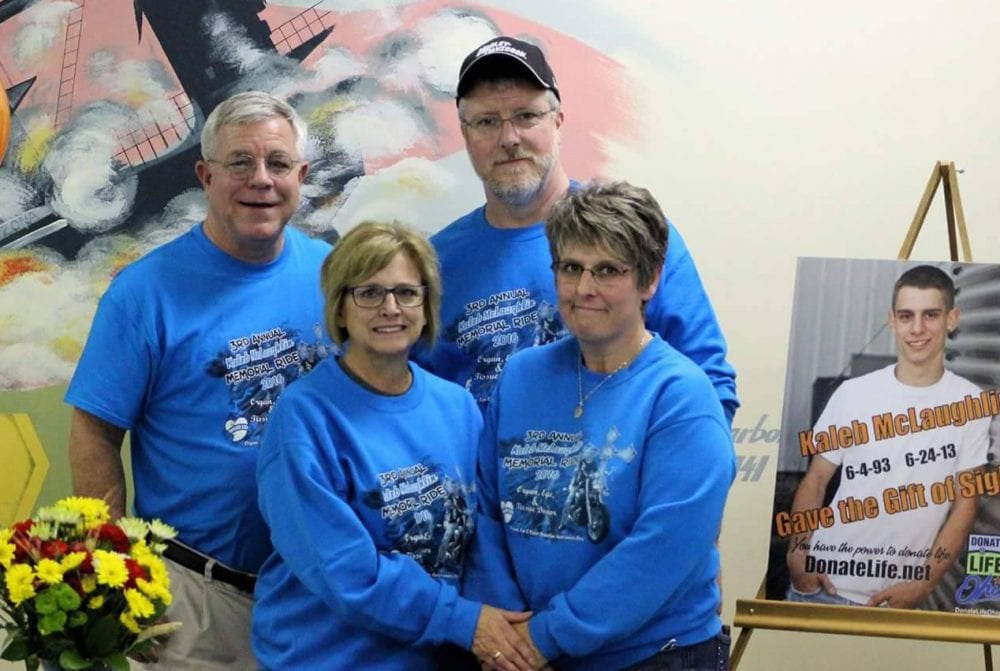 For many in the area and around the world, watching the annual Tournament of Roses parade is a tradition. It is an annual tradition to tune in to marvel at the incredible floral works of art as they make their way down Colorado Boulevard. Earlier this year, a sneak peek of the 14th annual Donate Life float was displayed, and the unveiling was described in a May 3 press release.

“The 14th annual Donate Life float is produced by OneLegacy, the Donate Life organization serving Southern California, and is enabled by nearly 100 sponsoring donation, transplant, healthcare, and family care organizations and individuals who help make donation and transplant possible across the country,” the press release said. “This year’s entry, ‘Teammates in Life’, reflects the parade’s theme “Echoes of Success” by reminding us that no one succeeds alone. We all thrive by working together and pulling in the same direction. Donors save the lives of grateful recipients and help families heal, and it is the large community of registered donors that makes it possible to save thousands of lives across the country each year.”

“The 2017 float depicts a spectacular Polynesian catamaran,” the release continued, “…which will be propelled by a team of 24 organ, eye, and tissue transplant recipients rowing in unison with strength gained from their donors. The sails of the vessel will feature 60 floral portraits of donors interwoven with Polynesian designs and patterns. Just as the donors’ gifts empower the lives of others, the sails help power the catamaran on its journey. Twelve living donors will walk alongside the float carrying flowers in celebration of the life they have given to others and the quality of life they continue to enjoy themselves. The ocean waves will showcase 1,000 white Akito roses, individually dedicated in memory of specific donors. Vibrant i’iwi and ‘amakihi birds perch amongst a lush landscape of tropical flowers and palm trees while a pair of tikis, representing light and life, abundance and peace, peer out of the jungle. The float will exude life with colorful, exotic blooms grown in Hawaii especially for the occasion. The float was designed by Charles Meier, who received some of the Tournament’s most prestigious awards for all four floats he designed in the 2016 Rose Parade, including the Donate Life float. The float will be built by Paradiso Parade Floats. Once completed thanks to the efforts of more than a thousand volunteers, it will sail down the streets of Pasadena during the 128th Rose Parade presented by Honda on Monday, January 2, 2017 at 8 a.m. (PST).”

Okay, so what’s up with the detailed description of a single float in the 2017 Tournament of Roses parade in the pages of The Village Reporter? What’s the big deal? Take a look back at the sentence describing the sails of the vessel, especially the part where it says, “…60 floral portraits of donors interwoven with Polynesian designs and patterns.” Out of the thousands available, Donate Life chose just 60 donors to be immortalized with a floral portrait on the sails of the vessel. One of those 60 will be Kaleb McLaughlin of Pioneer, and THAT is the big deal…especially to his family, friends and parents, Kevin and Kim Oxender. ‘Kaleb’s Cause’ has taken yet another step forward.

Closer to home, a November 21 press release from Toledo Community Tissue Services further elaborated upon the selection of Kaleb for a floragraph on the Donate Life float. After being lost in a tragic 2013 traffic accident, Kaleb’s gift of tissue donations, “…helped heal the lives of 64 people.” The release described the detail that went into the creation of the unique artwork, stating, “Floragraphs are artistic portraits created by using spices, seeds and other organic materials to cover a digitized photograph of the individual. The final image is realistic, recognizable and a fitting memorial to donors everywhere. Each honoree shares the same legacy, saving and healing lives as an organ, eye or tissue donor.” 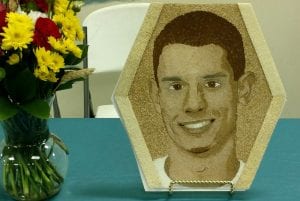 With the exacting precision and detail of a sand painting, the artwork is awe inspiring, and demands only the finest artists with the steadiest of hands to ensure a quality rendering. That work was ably handled by artist Monica De La Riva, who not only captured the visage of Kaleb from the provided photograph, but through a description of the young man, also captured the very essence of his soul. As she said in a card sent to Kevin and Kim, “Thank you for sharing Kaleb with me. It was a true honor to get to know him, and also decorate him. He is such a handsome man, and from what I was described, he has such a beautiful heart. I love that he would take the bad and make it good; I wish that we could have more beautiful souls like him.”

Monica’s work was ‘picture perfect’, but she intentionally left it incomplete. That which remained was turned over to Kaleb’s family and friends at a floragraph finishing party at the Pioneer American Legion Post 307 on the afternoon of November 27. As the press release explained, “While some families will travel to Pasadena in December to decorate their loved ones’ floragraphs, Kaleb’s portrait will be one of the portraits sent to families nationwide for completion in their hometowns.” As the small but family-strong community of Pioneer fully backs the annual Kaleb McLaughlin Memorial Ride and Organ Donation Awareness Day during the summer, so did the community back and contribute to the event of putting the finishing details on Kaleb’s floragraph. Family, friends, members of the Fire and Iron Station 84 Motorcycle Club, Pioneer firefighters, first responders, and even Pioneer Mayor Ed and Ann Kidston joined Kevin and Kim to put the final touches on the artwork that will be riding high atop the Donate Life ‘Teammates in Life’ float as it winds through the streets of Pasadena in the 128th Tournament of Roses parade. “After the parade, they are going to box it up and send it back to us,” Kevin said.

“We are very honored to be part of this year’s sponsors who support the 2017 Donate Life Rose Parade float, to continue showcasing the importance of organ, eye and tissue donation,” said Abby Brentlinger, the Director of Toledo Community Tissue Services. “We are excited to represent our community through the stories of our participants, whose lives have been forever changed and touched by the gift of life, whether they are living donors, donor families or recipients.”

“The Rose Parade gives the organ, eye and tissue donation and transplantation community an opportunity to come together as a team to inspire millions of viewers to support their fellow Americans by registering as donors.” said Tom Mone, Chairman of the Donate Life float committee and CEO of OneLegacy. “Millions of Rose Parade watchers will make an emotional connection to the ideals of community and cooperation our float will depict. There is a clear symbolic association between the team effort needed to propel the catamaran and the selflessness of deceased donors and their families providing life-saving gifts to grateful recipients. Organ donation and transplantation is truly a team effort, and our 2017 float conveys that beautifully.”

“In the beginning,” Kim recalled, “I thought, ‘Kaleb wasn’t a major organ donor; how can we tell his story? He was just tissue and eyes.’ That’s a big thing to someone! You see on the news of parents being able to hear their child’s heart beating again. We didn’t get that, because they couldn’t use Kaleb’s heart.” “But they used his valves,” Kevin interjected. “Somebody can see, because they have Kaleb’s eyes,” Kim added. “A professional football player can continue playing, because he has Kaleb’s tissues. That’s just as important. A life enhanced…that’s just as important.” “Skin,” added Kevin. “He gave skin grafts to a burn victim that was scarred. His lungs were used for research to help those with lung diseases. I look at it this way…when you’re gone, you’re not going to need ‘em anymore.” Kim added, “You don’t have to die…you can be a living donor. Neil VanDeVoorde, who was at the 2016 Memorial Ride, is still in need of a kidney. You don’t have to die to change somebody’s life. Kidney and liver…you can be a living donor.”

In the space of the year 2016, Kaleb’s Cause has outgrown the Tri-State area, and landed in Las Vegas on the set of ‘Counting Cars’. Now it has taken a step further…to the 2017 Tournament of Roses parade, and a worldwide audience of millions. “We were supposed to fly out to Pasadena on December 28, and help put the float together,” Kim said. “But Kaleb’s lifelong best friend is getting married New Year’s Eve, so we told them that we had to decline. About three weeks ago, seven o’clock on a Friday night, the Community Tissue Services lady called and asked if we would still like to go out to the Tournament of Roses parade. She said, ‘We’ll fly you out on New Year’s Day.’ As it just so happens, the parade isn’t until January 2 this year. We couldn’t go out for the floragraph, so we sent a picture. Now they said that they still wanted us to be there for the parade. I told Kevin, ‘This is a God thing!’”

Kevin and Kim are not only going to Pasadena for the Tournament of Roses parade, they are going to be seated as float judges for the event. They have other things planned that they want to be able to do. At the end of the parade, Kevin, a self-admitted gearhead, wants to be able to climb inside a float to scope out the power train and the pilothouse. Kim wants to meet Monica De La Riva, the artist in charge of Kaleb’s floragraph. One thing that they want to do together though is something that they both say that they will do for the remainder of their lives, and that is talk about their son. “It’s not about us,” Kevin said. “It’s not about us. It was never about us, and it never will be about us. It will always be about him.”

Pasadena, California, and the rest of the viewing world, may I introduce you to Mr. Kaleb McLaughlin of Pioneer, Ohio? Remember the name, and remember the cause…you’ll be hearing them again in the not-too-distant future.