Kunkle Sewer Project Progressing Along With Completion In Sight 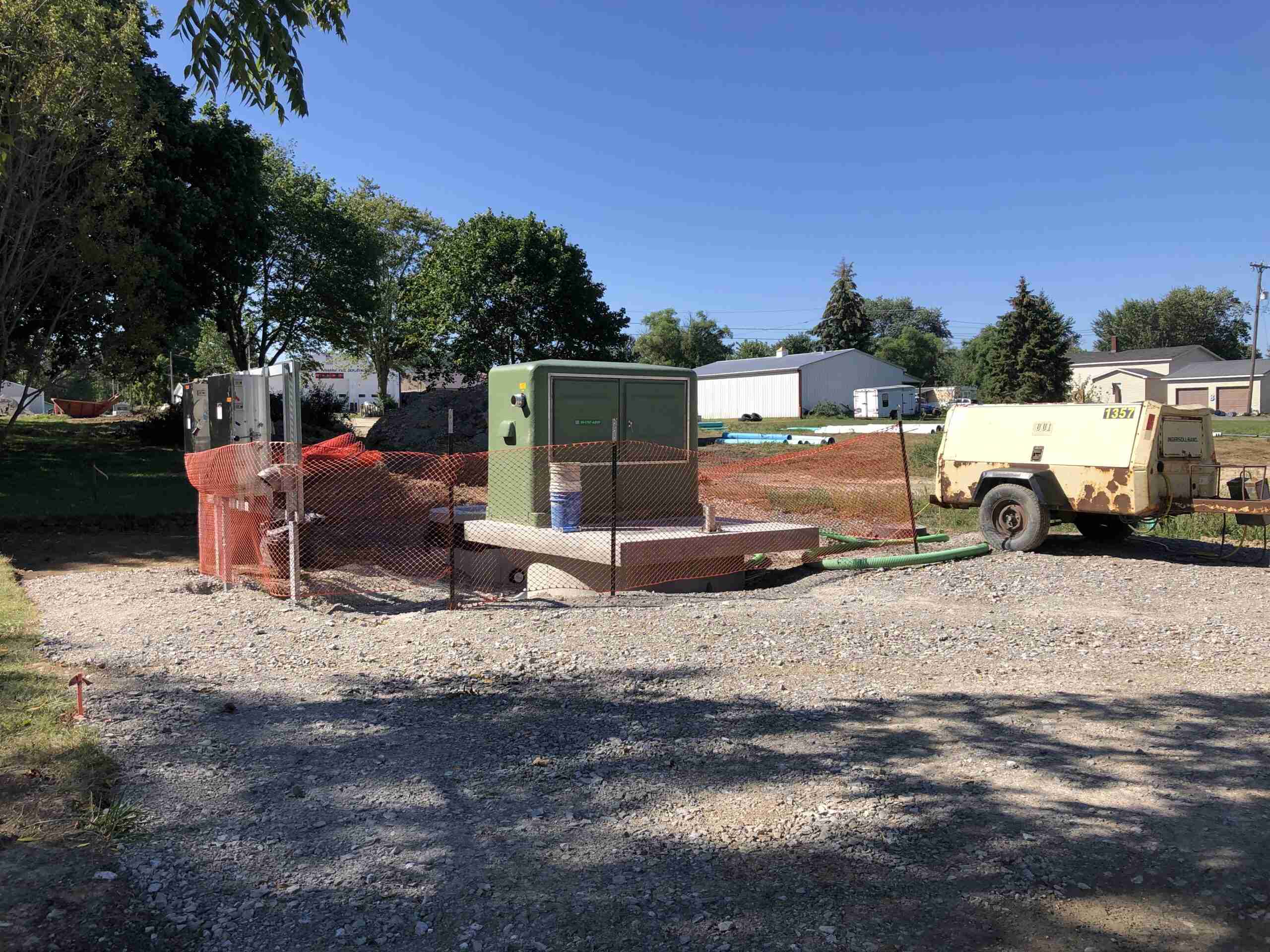 LIFT STATION … This new little building in Kunkle will be doing a big job as once the system is up and running, the sewage will be directed there before going to the lagoons on the north end of town. (PHOTOS BY REBECCA MILLER, STAFF)

Driving into the tiny town of Kunkle, Ohio is a little harder at present, September 2021, as the main streets are still all torn up from the major sewer project that is happening.

Not only are the streets torn up, but every single yard looks like giant moles attacked the town.

Back in March of this year, in an update on the Kunkle Sewer Collection System project, Williams County Engineer Todd Roth explained to Kunkle residents that clear through to the end of 2021, their village would be a site of major construction.

The Underground Utilities, Inc. contractor began work in the middle of March, starting on Oak St. and Pleasant St., north of Angola St., and then on Angola St. as well.

“The main lines in the road right of ways will be constructed first over the next few months and then the service lines will be connected to each home at a later date,” Roth said in the letter.

That later date has come and gone, thus causing the look of a giant mole attack to the eighty or ninety homes and other buildings there.

The promise that traffic would be maintained and all residents would have continuous access to their property has been kept.

It may not be pretty right now, but the knowledge that their own Sewer System should be up and running soon has to give some consolation to the residents.

The lagoon is half full of water presently and has to be full before it can go operational. There are actually two initial lagoons and then a larger pond for settlement before discharge.

While the roads were torn up and lines were being laid and connected, two other major pieces of the project were also being constructed. The Kunkle Sewer Treatment Lagoon was leveled out, and fenced in, on the north side of the Angola St. Railroad Crossing.

The farm that had been there was torn down, a huge lot was made and the fencing was all put up around the Lagoon. In town, the Lift Station to which all the sewage is directed from the Collection System under the roads, has also been built, in the Oak and Church St. location which was determined for that purpose.

From a phone interview with County Engineer, Todd Roth, the current status on the project is that they are waiting on approval form ODNR and the EPA for the three Lagoons before they can put them in operation.

There is a start up date for the pump/lift station for the second week of September, and once those two are done they can start making the connections at the houses to the collection system. They need more water in the Lagoons, Roth said, and the lagoons are in the hands of the ODNR and EPA.

A date for completion cannot be estimated until that approval is given. Roth said the village residents have been very patient with the project.

They will be paving Pleasant and Angola Streets soon, as the trenches are already covered, and the paving is the next step for the streets. Things should start getting cleaned up soon, also.

They have a progress meeting the second week of September with the contractors and all parties involved to try to set a game plan for the end of the project.

The collection system is in place, so the connections to the houses have to be completed and the cleanup has to be done at each building, after the final operation is ok’d for the lagoons.

When it is all completed, the village will have their own sewer system and beautiful new roads, as well as cleaned up yards, so, Kunkle residents, hang in there, it is coming. 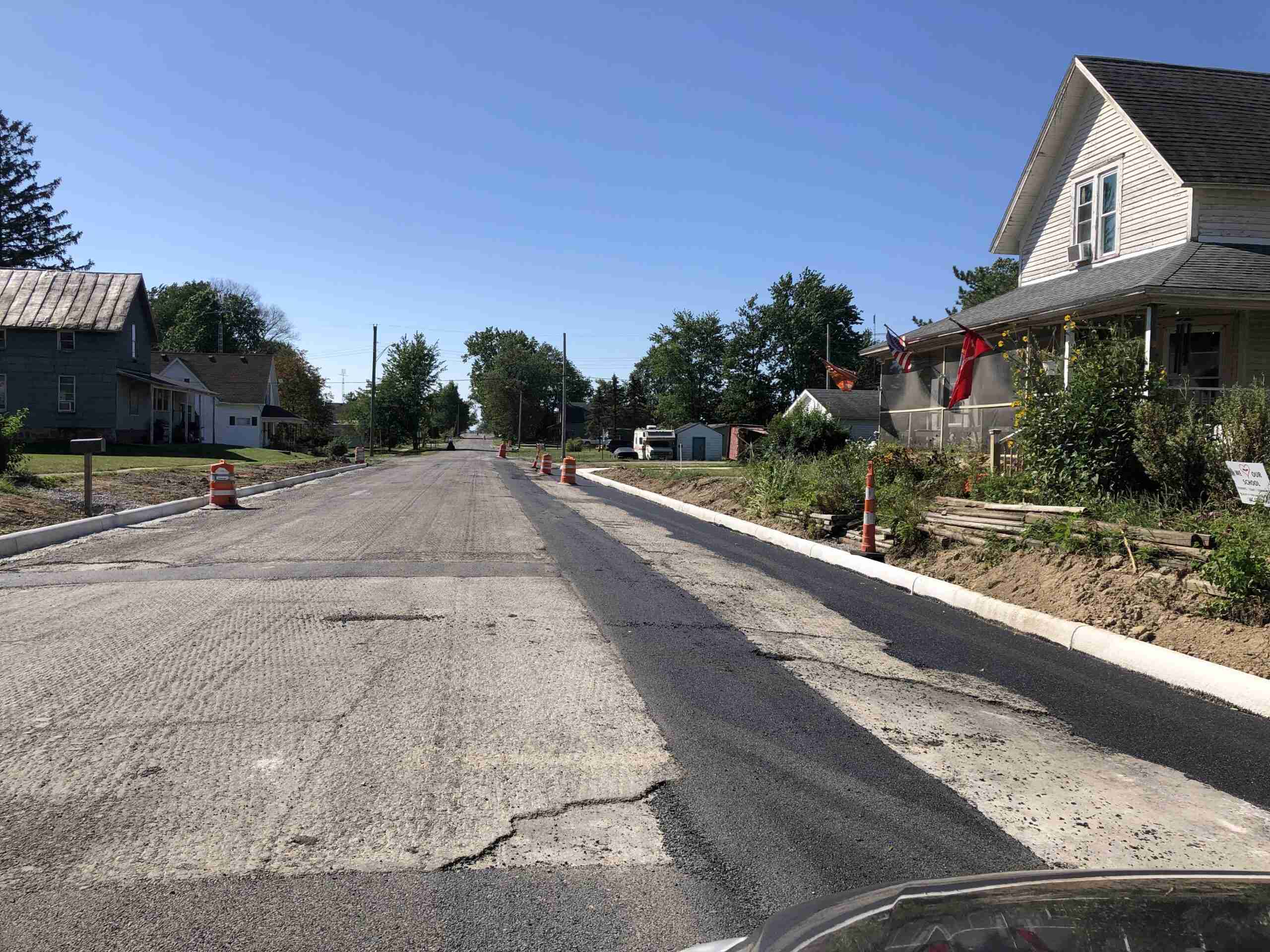 STRIPES MARK NEW BEGINNING … The trenches have been dug and covered, pipes laid and new curbs put in as this project had many different aspects that had and still have to be done before it is complete.