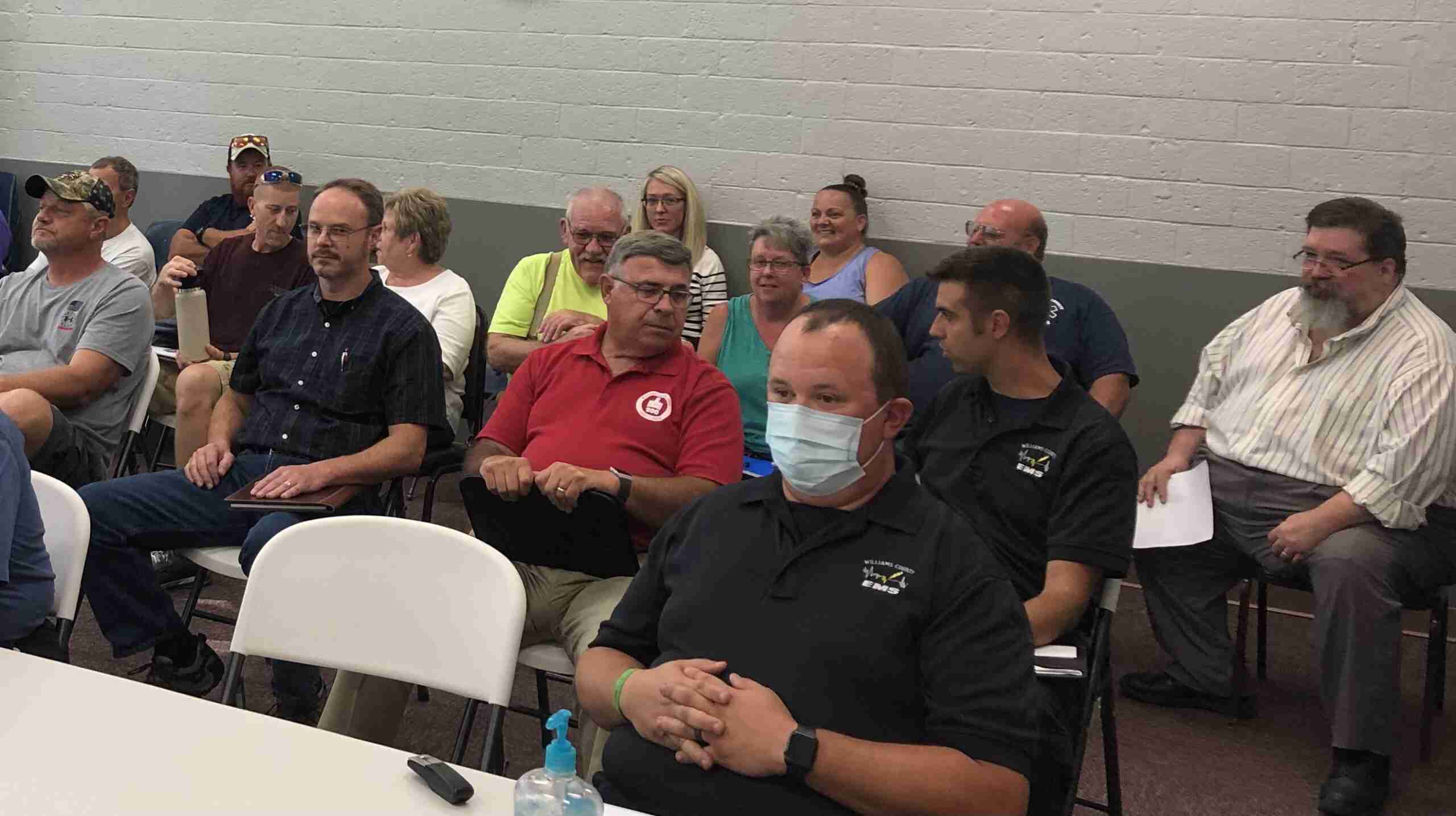 GREAT TURNOUT … A special meeting was held by the Edgerton Village Council on Tuesday evening, August 31, 2021. The visitor area was full with at least 25 people present. Seen here are some of the first to arrive for the EMS inspired meeting. (PHOTO BY REBECCA MILLER, STAFF)

The Williams County Emergency Medical Service Chief, Kyle Brigle, who stepped into the position when Jim Hicks who served for the past 34 years retired in March of this year, gave a presentation to the Edgerton Village Council in a Special Meeting on August 31, 2021.

The presentation was concerning the great need for more First Responders in the county and was attended by quite a roomful of people.

The meeting lasted for one hour, basically directed by Edgerton Village Administrator, Dawn Fitzcharles. Mayor Robert Day explained at the opening that it was being held per the request of the county EMS department to discuss ways to draw more people into the program.

With just two council members not present, Fitzcharles welcomed EMS Chief Brigle and Assistant Chief Brumbaugh. Brigle gave a short presentation which explained the county EMS program, concerning staffing, the service they provide, their current coverage, their coverage goal, and what they need from the community. He stated that they need a “good, strong First Responder program.”

A discussion followed with the floating of ideas for how the village can get more people to step up and be a part of the Emergency Medical Service.

Chief Brigle shared that one big idea he feels would bring in more people is to ask them to become EMRs (First Responders) instead of EMTs (Emergency Medical Technicians).

He explained that the training hours required for an EMR are much less than for an EMT. They could not be counted as one of the two in a responding Emergency Truck but they could definitely help a great deal in cutting down on how long it takes to get someone who is qualified to help, on the scene.

While EMTs have to take 48 hours of training every three years, EMRs only need 16 hours. EMRs do not have to be on call. They can just respond when they are free.

Commissioner Hilkert shared how West Unity citizens rose to the call to become First Responders when their village was in great need of more help. He also said that the Commissioners supplied the village with a vehicle to be used by the EMR’s.

Brigle said that West Unity has become the “poster child” for having the best volunteer set up in their village for emergency responses. They have been able to save lives while waiting for the EMS to arrive. Cutting the response time has been a huge help.

Former EMS Chief Jim Hicks said that he has felt that one of the best ways to fill the need is to have the Fire Fighters also get certified as First Responders.

It was suggested that someone go and speak to the Edgerton Seniors and invite them to consider becoming EMTs or EMRs. Brigle and Brumbaugh are prepared to teach a class for anyone interested in becoming an EMR as they are accredited to teach it.

Brigle offered to go to Edgerton if they have ten people sign up for the class, otherwise, it will be held at their office in Bryan.

Other ideas that were brought up from the guests were:

-Start up the Explorer Program again, through the National Volunteer Council

-Hold community events with the vehicles out and let the residents come and ask questions, to stir up interest

-Put an Operating Levy on the ballot. “It would absorb the unpaid balances with all taxpayers paying just $210 a year,” Hicks said, adding “we don’t like taxes but this would be a huge move forward.”

-Have the area Businesses, especially the factories who often call for Emergencies, make donations to the EMS

-Fitzcharles suggested that businesses should give their employees who are EMTs or EMRs the freedom to make a run and return to work.

Responses to the suggestions:

-Chief Brigle said they would welcome anyone coming to ride with them for a day or a half day to see what is involved. Fitzcharles asked when he would need the sign up sheet turned in and he said by January 22 would be fine. She seemed determined to get the word out and have it filled. Her statement was “If we can partner, it will help everyone.”

-Commissioner Hilkert said he is pretty sure that if Edgerton will get a vibrant group of EMRs going, the Commissioners will supply them with a vehicle just like they did for West Unity.

-Fire Chief Scott Blue stated that as badly as they need people to join the fire department, he wants to “see this need healed first.”

-Interim Police Chief Matt Krill said that he feels there are some in the younger generations who would be interested to join up and that they just need to get the word out.

Mayor Day stated at the end of the meeting, “This is something we can do to take a step to better coverage.”

He thanked everyone for coming, especially Chief Brigle for the idea and the presentation and the meeting adjourned at 7 p.m.