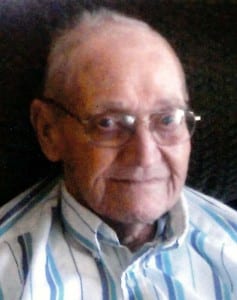 “Ike” L. Corman, 94 of Alvordton, died Saturday evening at the Defiance Area Inpatient Hospice Center in Defiance.  A Williams County resident for most of his life he was born on Christmas Eve in 1917 in Millcreek Township, Ohio to Henry and Olive B. (Raymond) Corman.  He graduated from West Unity High School in 1936.  After school Ike entered the US Army serving his country during WWII.

Ike was a Millcreek Township farmer and did work for Baker-Schindler Construction Company in Defiance as a carpenter retiring in 1982.

He was preceded in death by his parents, wife Mary Ellen (Wolford) Corman in February of 1982, son Dave Corman in 2007, two sisters and one brother.

Visitation hours for Ike were on Tuesday, September 25th from 2-8pm at the Thompson Funeral Home in Montpelier.  Services were on Wednesday at 11 am at the funeral home with Reverend David Tilly officiating.  Interment followed at Shiffler Cemetery in Bryan, Ohio with military rites by the Bryan Veterans.  In lieu of flowers donations may be made to Defiance Area Inpatient Hospice.  Condolences may be sent online to thethompsonfuneralhome.com