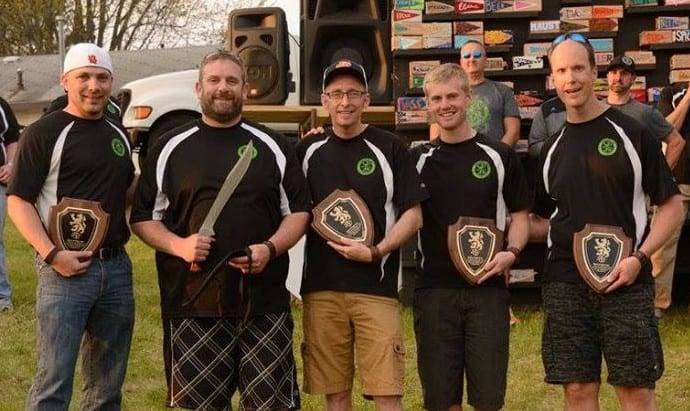 In a time when men are overcome by epidemic-level addictions, a new movement is afoot that calls men to stand up and fight.

A congregation in Edgerton/Angola is taking up the challenge of Fight Club and seeks to make themselves, their families and their generation stronger. Just as in the secular movie of the same name, words are superfluous.

“I will not talk about Fight Club,” Jason Mavis said. “But I will live it out in my word and my action.”

Mavis is the First Impressions Director at Life Changing Realities Fellowship, on U.S. 6 on the southwest corner of town (Edgerton). He is part of the church’s current Fight Club chapter and is learning his battle is not unique and he has backup in the fight.

Mavis is serious about fighting for the cause as he left a lawn care business in Goshen a year ago to become a full-time ministerial employee.

The inspiration for Fight Club came from a three-week series aimed at men at Grace Community Church in Goshen, Ind., called “Dudes.” Taught in 2011 by Pastor Jim Brown, the series got men to listen about the rising threat to society, families and the church from addiction.

Fight Club gets its name from Nehemiah 4:14: “After I looked things over, I stood up and said to the nobles, the officials and the rest of the people, “Don’t be afraid of them. Remember the Lord, who is great and awesome, and fight for your families, your sons and your daughters, your wives and your homes.”

The setting was Nehemiah at the broken down wall of Jerusalem and his imploring the men to get busy rebuilding it. So instead of men battling it out against each other as in the movie, the club builds teamwork and brotherhood among men who want to fight back against the pressures that tear down families and a generation.

One such enemy are video games: “Eighteen to 34-year-olds are playing more video games per day than 12 to 15-year-olds,” Mavis said.

From that spark, a worldwide phenomenon has been created.

According to the website http://www.fightclub414.com, Fight Club is a men’s discipleship resource developed by men, for men, to reach men- to turn the tide on mediocrity.

The thrust of the ministry is having men from a church sign up for a 10-week course called a chapter. Men are required to complete weekly challenges within the context of community and accountability.

A 3-strike rule applies to all challenges.

These challenges change weekly and cover spiritual, relational, and physical assignments, along with Scripture memory and many opportunities to try something new, sometimes intimidating, sometimes just-for-fun.

That means abstaining from alcohol and pornography, reading a chapter from the book of Proverbs and exercising for at least 15 minutes a day.

“We want to develop good daily habits,” Mavis said. “We live it out.”

Volunteering at the local church is a requirement, Mavis said.

While the standards are daunting, it is not legalistic, Mavis said.

“It’s about grace,” Mavis said. “We are not an elite group.”

The LCRF Fight Club has more than 175 participants, who are part of smaller groups called Squadrons. These groups help the men form bonds with other men to encourage each other during the program.

Churches interested in starting a Fight Club should investigate it and prepare for it. Some have tried to do it on their own and have not succeeded, he said.

COMMUNITY – AKA camaraderie, is a core ingredient of Fight Club. The idea that “we’re in this together”, that there is a band of brothers supporting one another, is pure adrenaline in the veins of this ministry. In Fight Club, this is experienced in four main ways:

1) Large Group Gatherings – In the 10-week quarter, there will be two or three large group gatherings consisting of a kickoff, one or two mid-quarter gatherings, and a graduation.

2) Smaller Groups (Squadrons) – A Squadron is a group of 8-12 men with a Squadron leader. This is the forum where breakfast meetings or pick-up games are scheduled, where prayer requests are shared and where assignments are reported on. Leadership flows from the Senior Leader to Squadron leaders, who take responsibility for the health of their group. There is freedom for each squadron to look different, depending on the leader and the personalities comprising it.

3) Online (via Closed Facebook Group) – With the pace of life, it’s hard to make face-to-face meetings happen, but it’s easy to interact online. This is a key component of the community of Fight Club. As members of a closed, invitation-only Facebook Group, Fight Club men share requests, pray for and encourage each other, and keep updated on each other’s lives. Many assignments involve completing a task and posting a photo on the Fight Club Facebook page.

4) Accountability Groups – At the beginning of the 10 weeks, the first assignment is to form a group of two or three Fight Club men who will hold each other accountable on matters of purity and integrity and will provide close support within their groups.

• I will shamelessly stand for Jesus Christ in word and action

• I will fight to hell and back for my family and home.

• I will lead and be led. In the absence of orders, I will take the lead to accomplish the mission. I will not leave any teammate behind.

• I will never quit or run from my enemy or my responsibilities. If knocked down I will get back up… there will always be fight left in me until I die.

• I will work harder than anyone else to be stronger physically, mentally, emotionally, and spiritually.

• My word is my bond – with honor, character, compassion, strength, and courage I will follow through.

• As a tender warrior I will keep my soul refreshed, fully alive, and balanced.

• I will battle injustice in our world defending the helpless, overlooked, and abused, so that freedom can reign.

• My training is never complete – I commit to a life-long pursuit of excellence, creativity, innovation, and godliness.

• I will bravely and relentlessly carry the name of Jesus Christ and the proud tradition of the heroes of my faith until death falls upon me or Jesus takes me home.

• I voluntarily accept the hazards of my calling – I will not whine, complain, or make excuses for my life, but will write a new legacy of hope and victory.

• I will not talk about fight club but will live out this creed with my actions – I will never be “that guy.”

James Pruitt my be reached at publisher@thevillagereporter.com