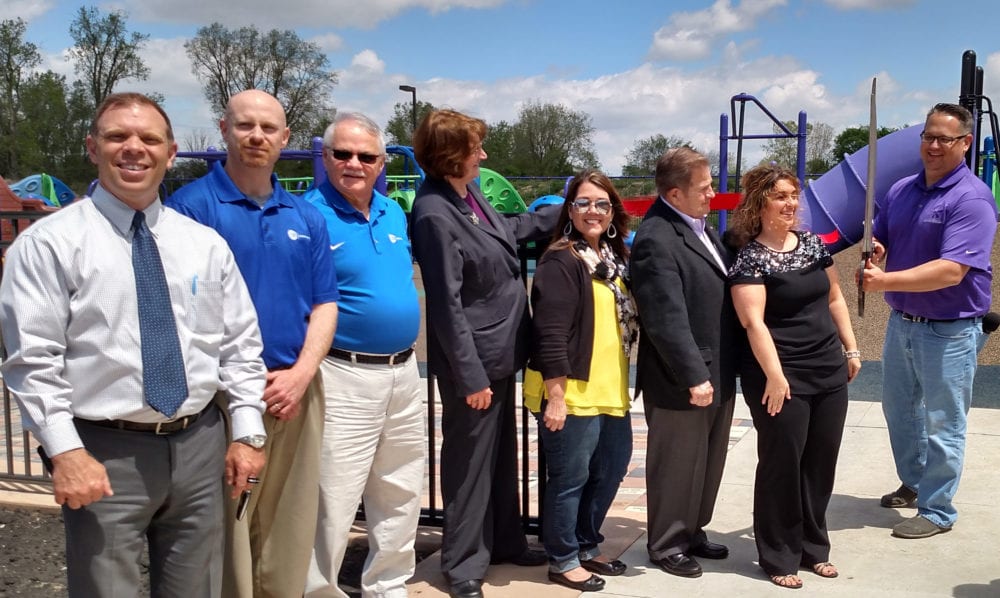 With over a year wrapped up in planning and construction and a financial outlay of well over $300,000, Northwest Ohio’s only handicap accessible inclusive playground officially opened for fun, exercise and social interaction for the students of New Horizons Academy at Sara’s Garden on West Leggett Street in Wauseon.

Surrounded by students, family members, employees and Wauseon Chamber of Commerce members, CEO Matt Rychener cut the ribbon last Friday afternoon to this 19,000 square foot, state-of-the-art playground that has been specifically designed to meet the needs of the children at New Horizons with physical, neurological and intellectual disabilities.

Originally opening as a hyperbaric oxygen treatment center in 2005, Sara’s Garden opened a school for children with special needs approximately four and a half years ago with their parking lot serving as a playground. As enrollment grew it became quickly obvious an actual playground was a necessity.

“We have about eighty students from twenty different school districts across Northwest Ohio that come to school every day so we needed someplace for them to play,” explained Mr. Rychener. We needed it to be accessible and inclusive for children of all abilities because we have kids with autism, spina bifida, cerebral palsy, traumatic brain injuries, Down syndrome so we needed it to be where children of all abilities could interact and play.”

Approximately seventy-five percent of the funding for this project came from corporate and individual donations. Some of the labor was donated as well or came from local volunteers.

As this playground project comes to a close, the administrators of Sara’s Garden will now turn their attention to raising funds to build an indoor playground facility to be used during those frigid Northwest Ohio winter months and on rainy days. Their long-range plans also include expanding the size of the school and increasing the enrollment.