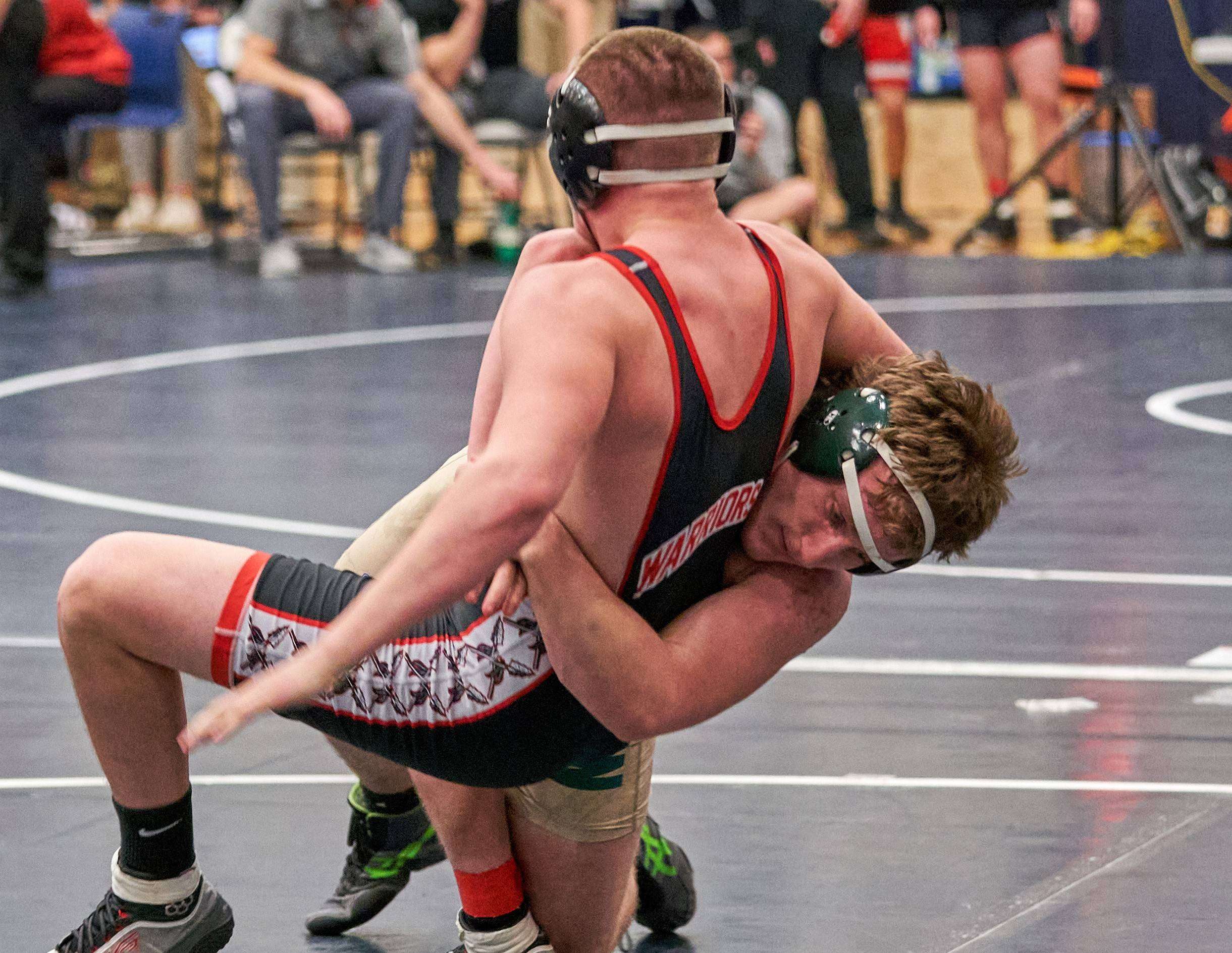 NAPOLEON — The Delta Panthers came home fourth as a team at the Division III District tournament and will have four wrestlers making the trip to Columbus this week. Delta had two champions on the day starting with Zack Mattin (42-0) at 113lbs who defeated Jared Fantuzzi (Milan Edison) with a pin at the 3:13 mark and Austin Kohlhofer (220lbs) won the title with a victory by fall over Wil Morrow from Patrick Henry.

Other wrestlers advancing for Delta were Evan Hanefeld (16-8) who was fourth at 106 pounds and Max Hoffman (33-13) who came home third in the 170lb weight class. Archbold placed fifth and will have three wrestlers moving on led by Carson Meyer who was the champion at 170lbs. after an 8-1 win over Logan Lloyd (Milan Edison).

Also moving on for the Bluestreaks are Andrew Francis (46-12) with a fourth-place finish at 126lbs and Brennan Short (53-8) who placed third at 145lbs after a 9-3 win over Jess Wright (Otsego) in the 3rd/4th place match.

Swanton will send one wrestler to state with Brodie Stevens (39-8) finishing as runner-up at 285lbs after losing in the first-place match by fall to Caden Hill from Ashland Crestview.

The State Championships begin on Friday, March 13th and concludes with the finals on Sunday, March 15th at the Schottenstein Center on the campus of The Ohio State University.

NORWALK–The Wauseon & Bryan wrestlers competed in Division II Districts with Wauseon placing third as a team and sending four wrestlers to this week’s State Championships in Columbus.
Bellevue was first in the team standings with 138.5points, followed by Perkins in second with 132.5 and Wauseon was third with 121.5.

Wauseon had 12 wrestlers in Norwalk and four of them punched their tickets to Columbus. One of the four is Damon Molina, who was District Champion at 113lbs. The junior lightweight wrestled a brilliant semifinal match against a quality opponent in senior Rico Cunningham (31-3) from Sandusky and with a 4-1 win he earned his spot at the Schottenstein Center.

In the finals he wrestled a familiar foe in St. Mary’s Memorial Trevor Hiles (22-2), who he’d beaten twice already this year, and he handled him 9-4. This will be Molina’s second trip to Columbus.

In the 138lb weight class, sophomore Lawson Grime earned a hard fought fourth place finish. After wrestling thru to the semifinals Grime fell to J.D. Thom (34-12) from Perkins in a tough match where it seemed like whoever was on top at the end of the match was going to win.

He then dropped down to the consolation rounds and lost to Emery Pahl from Upper Sandusky to garner his fourth-place qualifying spot.

At 160lbs, senior Jarrett Bischoff wrestled a brilliant tournament to get into the finals. He had a tough quarterfinal win 4-3 over Derick Coleman from Clyde and then pinned Hernandez from Napoleon in the semifinals.

In the finals he faced Nate Barrett (28-4) from Madison Comprehensive where Bischoff was pinned in the first period. Bischoff returns to Columbus after knee surgery kept him from wrestling last year.
Senior Sammy Sosa (285lbs) earned his long-awaited pass to Columbus after narrowly missing a spot last year. Sosa made sure he was not going to be denied by cruising through every opponent placed in front of him until the finals where Jackson from Central Catholic defaulted to the Indian Heavyweight.

The Bryan Golden Bears had three wrestlers qualify for the tournament, but they fell short of their goal of moving on to Columbus. Dylan McCandless (182lbs) scored all of Bryan’s points with a first-round win by fall over Ethan Tester from Fireland before falling in the quarterfinals to Ashland’s Jakob Bevelry.

He earned his second win of the weekend by defeating Dyllon Pollard of Sandusky by fall in his first consolation match but then was eliminated after a 5-3SV loss to Kasean Hataly from Columbian.
The State Championships begin on Friday, March 13th and concludes with the finals on Sunday, March 15th at the Schottenstein Center on the campus of The Ohio State University.