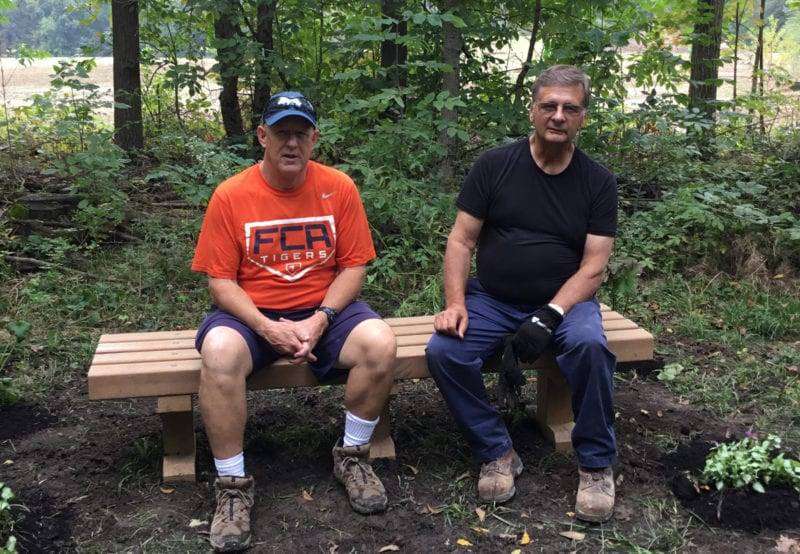 SEATED ON A NEW BENCH … One of the eight benches that were installed by Worthington Industries employees during a community work day on October 2nd, 2019 at the new addition to Homecoming Park in Wauseon, were Tom McWatters, (on the left) Rotary Park committee head and Ed Nofziger, the man who purchased and donated the land in order for new trails to be added to the ones already there. They are both very excited that the Wauseon cross country teams will now have more trails on which to run and compete. (PHOTOS BY REBECCA MILLER, STAFF)

While enjoying the beauty and convenience of the new Indian Hills Trails at Wauseon Homecoming Park, one might never guess how many individuals and groups it took to bring it into being. The story of it’s creation dates back at least 25 to 30 years ago when the property was owned by the Henry and Wilhelmina Stuckey family who bought it in 1918 when they moved here from Illinois.

Their children, including Alfred Stuckey, owned it jointly until in the early 90’s his sons, Kurt and George, bought the farmhouse. “We approached the city about giving the land to them as a memorial to our grandparents,” Kurt explained. They envisioned it being made into trails and Kurt even drew a possible layout for the trails, but at that time, the city said no thank you. “All the first generation people had passed away,” Kurt shared, and so about five years ago they sold it to Ed Nofziger who then donated it to the Rotary to become part of the Homecoming Park.

The work on the land has been going on for a while, preparing the trails, shaping the land and making drawings and plans, but on Wednesday, October 2, 2019 it got a huge boost.
Not only were Rotary members present to work and share lunch together that day, but over thirty men from Worthington Steel Industries to do the heavy labor, Tree Commission member Larry Frey, Ed Nofziger and Kurt Stuckey, Paul A. Andre from Andre Land Forming (Demolition and Excavation from Wauseon), Mayor Kathy Huner, Worthington Industries HR generalist Jessica Double, Pete Carr from Fulton County Soil and Water Conservation District, retired Service Forrester Tom Collins, and members of the Wauseon Beautification Team were also on site and active.

It is almost impossible to say who has done what for this great project, but suffice it to say, from the blueprint to the choice of trees, from the designing of the Sunny Wetland to the handling of the large machinery to dig it, they have all stepped up and played a part, some huge and some smaller, but all with the desire to better their city.

Ed Nofziger, who owns Haas Doors (one of largest employers in Wauseon) donated the 33 acres of land for trails to be added to Homecoming park. Thirty of the acres are already wooded and the other three acres have been landscaped to contain a small wetland and a number of newly planted trees. The trails that have been developed cover about one and a half miles within that acreage. Nofziger, who has been in The Rotary for the past 20 years and was part of earlier work on the park, explained that Homecoming Park already had the asphalt trails and now they are all connected. Nofziger shared that soon after he bought the land, he began to realize what a great addition it would be to the park.

Tom McWatters, head of the Rotary Trail Committee, along with Ed Nofziger, Pete Carr and Paul Andre have spearheaded this labor of love for the city of Wauseon. “Many others have been very involved as well,” McWatters pointed out, “but I guess the four of us have pulled a lot of the weight, and we have loved doing it!” The excitement in his voice and that of Paul Andre who drove McWatters and this journalist, who had no idea what a big project this was, around the new trails on October 16, 2019, was contagious. There was laughter and commaraderie at the sites where Worthington employees were getting the benches placed and plants put in, and McWatters and Andre joined in, along with a pinch of encouragement to keep up the good work.

The two men kept up a stream of information about the property, with tidbits such as, “This is known as the oldest Buckeye Tree in Fulton County,” and “All of these Tree Info Plaques were put in here by Eagle Scout, Levi Perkins. We hope someday to put barcodes on them and have someone narrate about each one, so that people enjoying a stroll can stop and learn about the woods.” Andre explained,

“These woods are full of wetland areas, and we are keeping it that way. We have chosen to bring in crushed stone for the parts of the trail that go through them, so that we are not raising the land and ruining the eco-system. The older/larger trees were part of the crop land that used to be here. Then in the 1950’s a lot of new trees were planted. Throughout the years those trees have had babies so the woods are full now.” 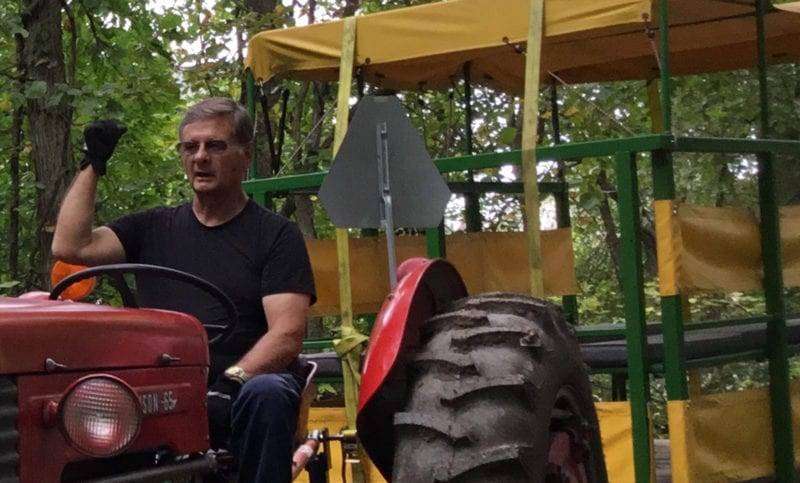 PROPERTY DONOR … Ed Nofziger, the man who bought the property right next to Homecoming Park, from the Henry Stuckey family and donated it to the Rotary, was out working hard and enjoying the day right along with the crew from Worthington Steel. In this picture, he had hooked a wagon up to his tractor and was going out through the wooded area to gather the workers to come in for lunch. The day of October 2, 2019 was dedicated to putting in 40 new trees and 8 benches.

During the day, forty more trees were planted, mostly in the three acres that are grassy. They surround the new wetland which was put there so that plants, which need a sunny area to grow, will add a new feel to the trails. There will be plants in this wetland such as cattails, as they cannot grow in the woodsy wetland areas. The “bowl” has been shaped for this new wetland and the plants will be put in at another time, but one can imagine what it will look like in the future.

When lunch time rolled around, Ed Nofziger drove a tractor with a wagon behind it, gathering up all the workers and bringing them to the Sheltered Picnic area. The Rotary had prepared a feast of stacks of ham and turkey for sandwiches with all the fixin’s, homemade salads and desserts as well as lemonade or water. Around 75 or more enjoyed lunch together and had the pleasure of hearing from one of the original land owners, Kurt Stuckey. “Thanks for making a dream come true for the descendants of the Stuckey Family. I couldn’t have hoped for a better outcome for the farm,” he told the group with a lot of emotion in his voice.

McWatters told the Wauseon City Council at their meeting on Monday, October 7, “Wow! The Worthington Steel guys were amazing. They planted 40 trees and installed 8 benches. …they really need to be thanked for their service, And the Tree Commission, Pete Carr and the Soil and Water folks, this was another cool community event to get that work done. The corridor has been transformed over the course of two weeks, especially last Wednesday. We took a 10 foot horse path between the two woods and turned it into …a 250 foot wide oasis.”

Mayor Huner added that she could not have been more impressed by the turnout from Worthington Industries. Not only were there at least 30 of their employees helping at the park that day, but the company had closed down for the day and sent out six teams to projects all around the county. “To shut down production for a day, is amazing,” she said. “One of the men who grew up in Wauseon said that to be able to take his children back there and say he had a hand in it means a lot to him. It was a great day! A great day to see everyone working like that.”