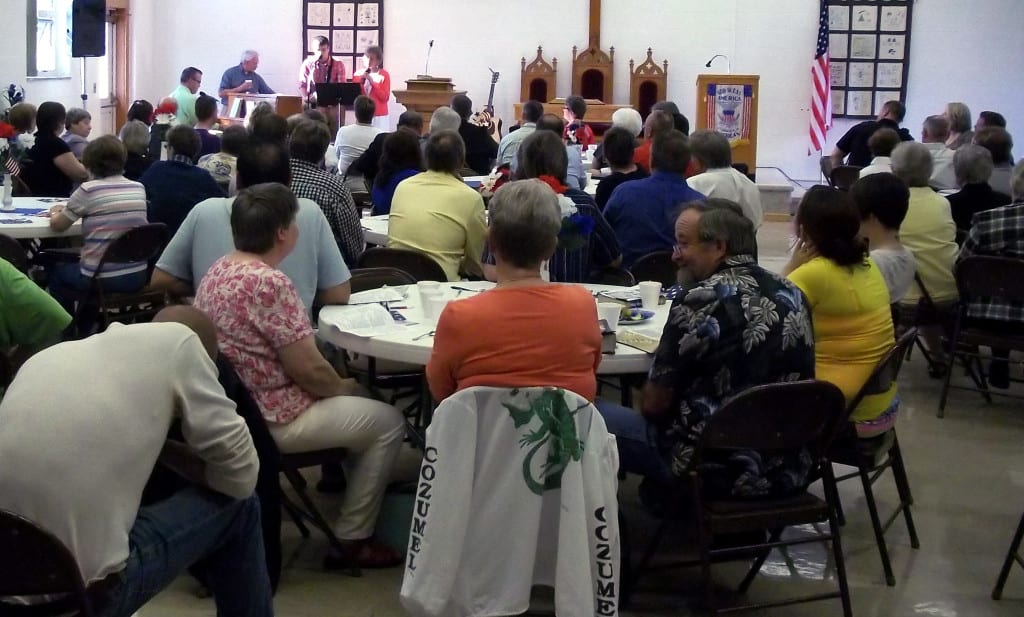 DAY OF PRAYER … A good-sized crowd enjoyed the Day of Prayer service.

The fellowship hall at the 1st Presbyterian Church in Montpelier, Ohio, was filled with people eager to hear keynote speaker Kermit Riehle and to pray for our nation on Thursday, May 2, 2013. It was a beautiful spring day with nary a cloud in the sky, which seemed fitting for the day and the opening song “America the Beautiful.” The theme for the event was Pray for America. Village and county official were invited to the program, and were introduced by Pastor Dave Tilly. Mayor Steve Yagelski read Montpelier’s Proclamation of the National Day of Prayer.

Following a continental breakfast featuring healthy muffins, doughnuts, fruit, coffee and juice, attendees were treated to music from House of Prayer Church’s worship team. Food was donated for the event by Chief Supermarket, Miller’s New Market, and Two Brother’s Market. The program opened with music from the Riehle family with Kermit on the piano, son Ben on the guitar, and wife Denise providing vocals. Riehle, the elementary principal at Edgerton Schools, was primarily moved by the need to pray for our nation’s children. Although new to the job of elementary school principal, he was a high school principal for 18 years. He expressed thankfulness to be teaching in a school which allows their youth to have a Fellowship of Christian Athletes club. He was also thankful for Christian staff members who regularly uplift him in prayer. He noted that he has been involved in youth ministry for many years, and his son is now a youth pastor near Akron.

One of the things he loves about working with and ministering to children is their “childlike faith.” He said that with all that is going on in this world and with over 50% of families experiencing divorce that we need direction and “that direction for us is Jesus Christ.”

“We must commit to praying for our next generation,” emphasized Riehle. He asked those in the audience to pray for their children and grandchildren. He added that “we need to pray for our churches, our schools and our communities.”

The service concluded with a rousing rendition of “God Bless America” by the audience.

Be the first to comment on "Montpelier Observes Day Of Prayer"