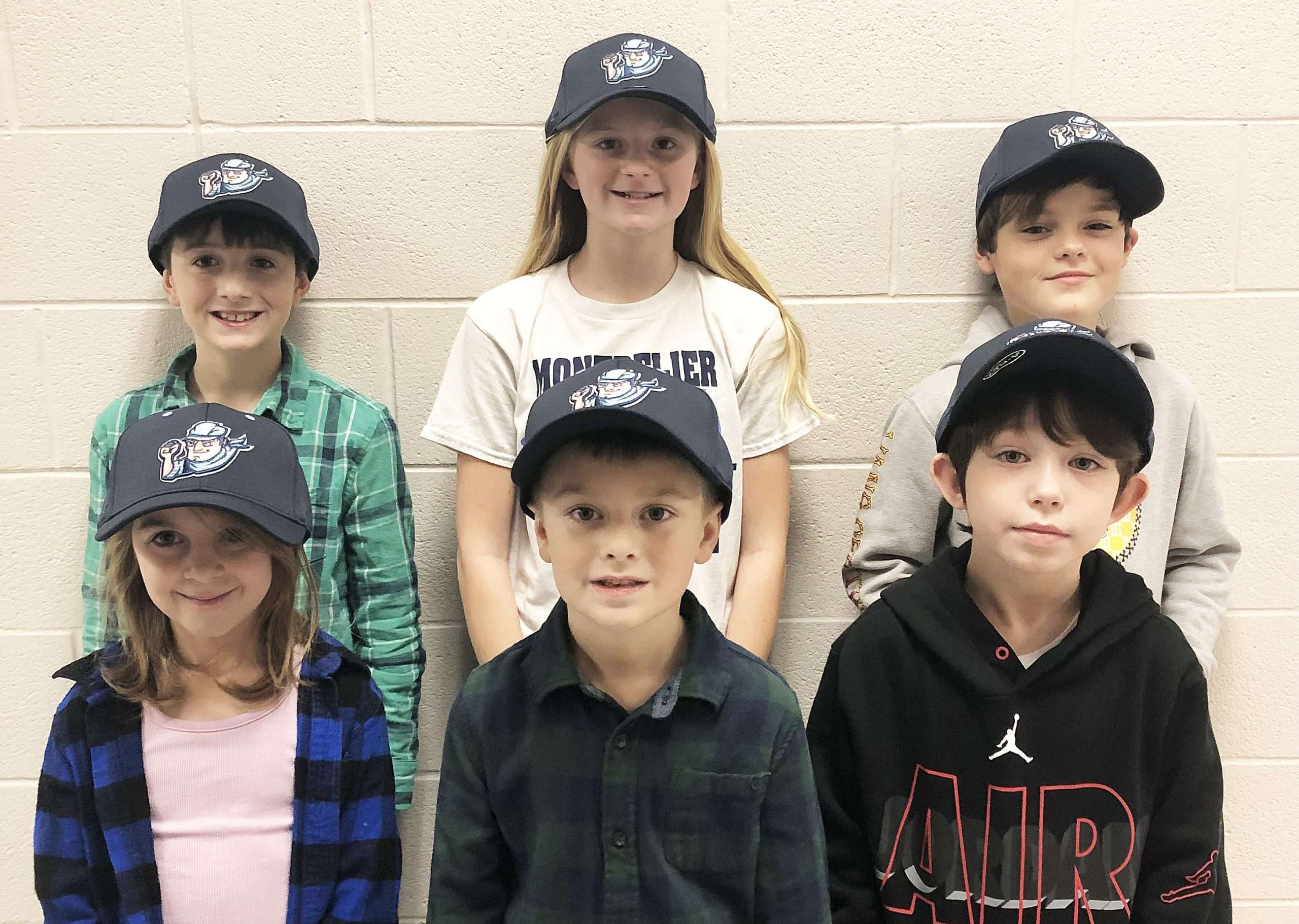 DECEMBER RECOGNITION … As Pastor Ben Harris stated at the December 13, 2022 Montpelier School Board meeting, this school does a great job of recognizing growth in their students. This month the recognition letters were read for eleven students. These six were present to accept their hats from Superintendent Grime…left to right in back are 4th grader Sawyer Rosendaul, 5th grader Kinley Bechtol and 4th grader Landon Rios. In the front row are Kindergartener KayLynn Funchion, 1st grader Paxtyn Coleman and 2nd Grader Emiliano Moreno. Also recognized were Blake Schmitt, Bryson Stuck, James Hickling, Kensie Hall and Amber Britton. (PHOTO BY REBECCA MILLER, STAFF)

Quite a discussion was held at the Montpelier December 13, 2022 School Board meeting during the portion when public participation is allowed.

Brian Brown, father to some girls who attend Montpelier schools, started his thoughts by saying, “Concerning the issue that was going on at the school, it was handled very poorly.”

He went on to say that his daughters came home saying something to the effect that there was going to be a school shooting and he was upset that no one alerted the parents.

Superintendent Jamie Grime asked Mr. Brown if he has information that the school does not have, and Brown said that someone said there is a list with names on it of who the suspected student wants to shoot.

Mr. Grime asked if the girls heard this themselves and if so, they would like to have them talk with Chief Dan McGee to share what they heard said.

Brown said that he feels that the suspect should get more consequences than just being set in the office, which is what he had heard was the solution at this time.

Mr. Grime explained that every time they hear of any possible threat to the safety of the students, they “immediately investigate all leads to all people involved and exhaust all resources.”

He pointed out that when there is no one who can corroborate a story with facts, they “have a duty to protect kids who are accused of something that they didn’t do.”

He asked Mr. Brown if it was his daughter that was falsely accused, wouldn’t he want the school to protect her and Brown said yes, he would.

Grime continued that in this situation, the school and Montpelier PD have spent numerous hours looking into this and determined that there is not a credible threat.

He said it is a slippery slope to say things with no facts to back them up. He said that the entire day was spent on the situation and they have not been able to prove anything.

Brown asked why parents were not notified and Grime said that there was not a threat, just a rumor.

He went on to say that if they were to alert parents every time there is a rumor, they would be doing that all the time.

He guaranteed that if there is an actual threat the parents will be notified. “We can’t make decisions based on rumors,” he added.

At that point, Chief McGee who was present, spoke at length, explaining a number of things…

He added, “trust me, your kids are on my mind. I would never knowingly allow somebody to do something to this school.”

“We are not hiding anything. There is no conspiracy behind this. I can tell you that we still are looking into some things but it is less likely about the shooting than about people who are lying and making things up.”

Mr. Grime said that he wants the parents to know that any time a possible threat is brought to their attention, the first thing they do is to pick up the phone and call the Montpelier Police Department.

Mr. Brown said that he just hates when his kids come home with fearful things to share.

Mrs. Thorp added to the conversation that she asked many students if they feel safe at the school and she said every one of them answered that they do feel safe there.

Chief McGee said that he will be making another statement after he has time to speak with the administration and school board, and “it will probably divulge more than usual, but it will be the appropriate amount at the appropriate time released, when we have some solidified facts.”

Mr. Grime thanked Mr. Brown for “coming in and speaking your mind. I have more respect for you for coming in and looking me in the eye and telling me what you need to say than telling me on Facebook.”

Mr. Brown assured him that is not his way, he “just wants to know his girls are safe,” and another parent commented that she would also come and tell them in person.

She expressed her frustration with everyone getting caught up in the Facebook drama.

She thanked all the community leaders there for what they do to protect the students.

At that point the discussion ended, with an assurance that the chief would like to speak to any students who ever have first-hand facts.

There was a great deal of other business in the meeting as well. The students were congratulated and honored at the beginning as always, as Montpelier focuses on making sure they are recognized.

Ms. Kendra Michaelis introduced the new facility dog, Roger, to the board and to the group who were there for the meeting.

Roger is a black lab who seemed very calm and content. Michaelis said that when he has a red leash, he is going somewhere with a purpose so the students are not to touch or speak to him.

The students are instructed to ask for permission to have a moment with him. She added they are teaching the children and staff not to touch his face when he is incorporated into the classroom and he will be joining them full-time on the first day back in January.

There was some discussion over the word facility instead of therapy, with Mr. Grime explaining that the group who facilitated them getting the dog, The Ability Center, said he is not trained for therapy but as a facility pet.

He will be there for comfort and fun. Board member Patti Rockey said that in the future it is important that board members know when words are changed as the meaning might help them determine their votes on specific topics.

The board talked over the board meeting dates for 2023 and whether or not the dates are fine with them.

Carla Rice said they will vote on it at the January meeting. For the legislative report, Rockey shared that Senate Bill 178 passed out of senate on December 7 and is in the house.

“The bill would reform the functions and responsibilities of the State Board of Education, the Superintendent of Public Instructions, and the Ohio Department of Education.”

Senate Bill 368 was “referred to committee on November 30, 2022. The bill would expand eligibility for EdChoice scholarships to all students beginning with scholarships sought for the 2023-34 school year, and would increase the Homeschool Expense Tax Credit from $250 to $2000.”

Mrs. Thorp began her report by thanking all of the government students who had shown up for the board meeting that night, saying it was nice to see them all there. She reported:

Pastor Ben Harris from House of Prayer was present to speak to council about the possibility of LifeWise Academy being started for Montpelier students.

Harris started by commending the school for all they are doing to build character in the students.

He said that they are working on the details and wanted the board to know. He explained that it is a bible-based program that takes place during school hours, off school property, with parental consent and completely funded by the community.

It uses some nationally known bible-based teaching to teach character traits that are needed.

Bryan is doing it and many others in the area are looking into starting the program also.

It is legal, based on a 1952 ruling, and it is having a major impact in the children’s lives and the schools they attend.

He said he will get back to the board when they have more information on the details.

He did let it slip that they would like to build a community resource building right near the school where LifeWise could meet and other things could take place there as well.

Board members expressed their thoughts that it sounds like a good idea and that they would like teachers to have input at the meeting when it is revisited.

The board voted to approve the following reports and staff:

A motion was passed to enter into executive session with Chief McGee present, to discuss “specialized details of security arrangements.”