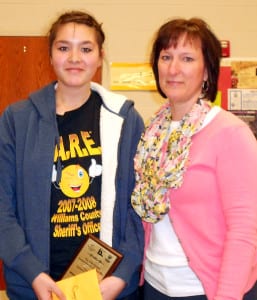 Meili Leung, winner of the Montpelier Spelling Bee, receiving a $100 prize from Barbara Turner. The prize was given in memory of Denver Bechtol.

The Montpelier School Board approved the purchase of both a 30 passenger bus and a 9 passenger van during their regular meeting on Tuesday, March 12. The vehicles, being purchased from Cardinal Bus Sales and Service, Inc. at a cost of $46,446 and $41,661 respectively, use gasoline as opposed to diesel and will be more fuel efficient than the 80 passenger busses commonly used. Both will be put into use during circumstances where the school only needs to transport a small number of students for field trips or for athletic events.
[emember_protected custom_msg=”Full content protected for online subscribers.  Purchase a one week subscription from the top menu bar for just $1.99 to read all online content (full access).  Longer subscription plans are also available.  Subscriptions cover our costs to attend local events; bringing forth Hometown News Coverage to our communities.”]
School officials were also happy to report on a number of student and group achievements during the meeting. Junior High/High School Principal Su Thorp was pleased to tell the board that the High School Choir had recently competed in OMEA District 1 Large Group Adjudicated Event in Archbold and received a Superior rating. This rating qualifies the choir to move on to the State competition for the first time in thirty years. The MHS band also performed well at the competition, earning a rating of Excellent.

Board member Darrell Higbie also noted that the Archery team has also been performing well and that both the middle school and high school teams will be moving on to Nationals in Louisville, Kentucky. The middle school scored 2875 and the high school team scored 3140 during their State competition to qualify for the trip. Lita Banks scored 288/300 which was both her personal best and which earned her a second place finish in the girls’ high school division. The elementary team also performed well, only missing the qualifying mark by about 300 points.

Montpelier also continues the trend of performing well in spelling bees but it was noted by Superintendent Jamison Grime that Montpelier spellers will have to continue to work hard to maintain their achievements due to the upcoming graduation of Meili Leung. Leung, who received a $100 prize from Barbara Turner, in memory of Denver Bechtol, for winning the Montpelier Spelling Bee eventually went on to place third in the regional competition.

Both principals agreed that this is an extremely busy time a year. A dance festival for grades 3-6 has taken place as well as the 2nd grade Reading Night Out. In the Junior High and High School the 8th grade recently saw an Acting Out assembly focused on helping them to make good choices, sophomores have been taking the Ohio Graduation Test (OGT), and freshmen have been taking the practice OGT to prepare them for next year. Upcoming dates that parents and students will want to be aware of are:

Employment of Certified Staff business conducted during the meeting included the approval of the resignations of bus driver Lori Poynter effective February 8 and of Katie Zimmerman as JV softball coach. Scott Goodnight as a 3 hour per day bus driver effective February 11, Khrysta Long as a Girls Softball volunteer, and Jill Altaffer as JV softball coach for the 2012-2013 year were all also approved.

Other business included the approval of membership renewal dues with the National Association of Equipment and Inventory Reduction (NAEIR), which releases a catalogue to the school with various types of equipment no longer wanted by other facilities as well as the approval of a trip to New York from April 11, 2013 through April 14, 2013 for the Locomotion singing group.

All financial statements and investments for the month of February 2013 were also approved along with the transfer of $60,000 from the Permanent Improvement fund to the General fund for repayment of the July 2012 cash advance and the creation of the Ohio K-12 Network Subsidy FY13 fund.

The board went into executive session to discuss personnel. No actions were taken upon return to open session.