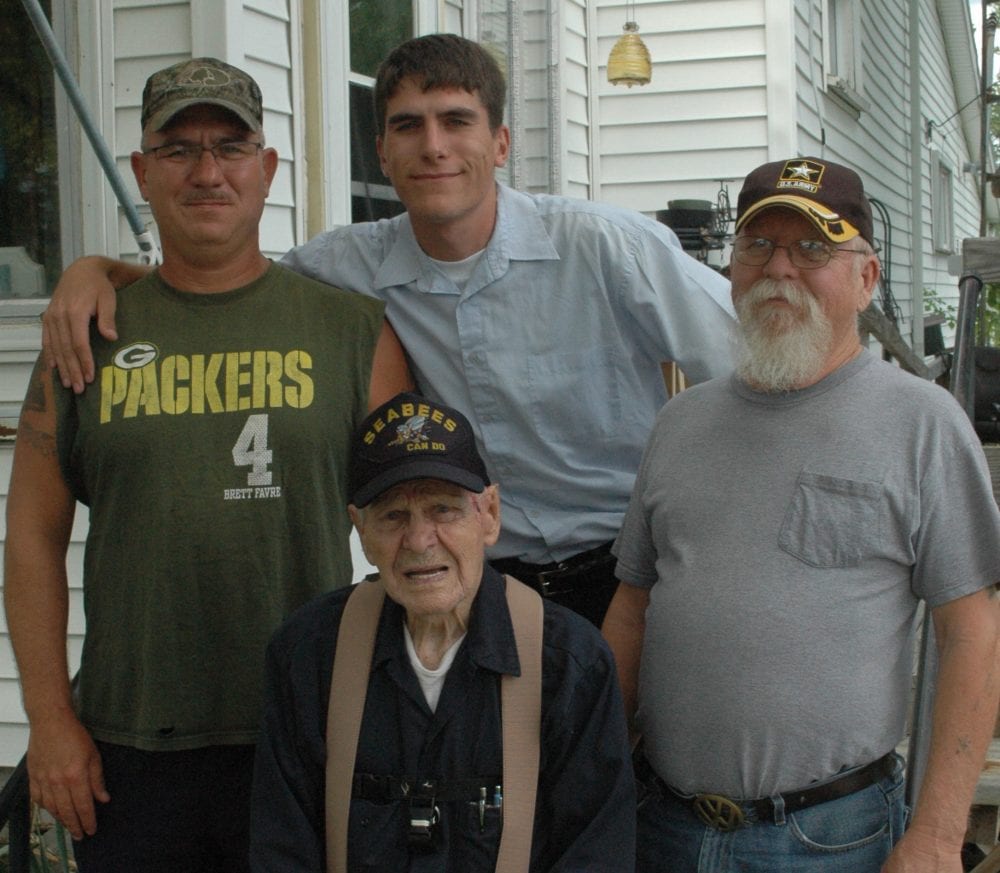 Ross Rummel was joined for the interview with his son, Raymond Rummel, a nine-year Army veteran; grandson Alan Bumpus, a 15-year Army veteran and great-grandson Michael Bumpus, a four-year veteran of the Marines, both of Hillsdale, Mich.

Millions of men served during World War II, but not everyone was a soldier on the front line.

Some, like Ross Rummel of Montpelier served the nation by helping with the grunt work that supported the war effort. For Rummel, that was spending 2 ½ years in the Pacific Theater working as a Seabee.

Rummel was a member of the 109th Naval Construction Battalion, Company D, Group 3. His address at the time was across the street from where currently resides in Montpelier.

Seabees were construction workers who received enough training to handle a weapon while they built airstrips and military bases. They moved with the troops as they hopped from island to island.

They were founded after some construction workers doing a job for the Navy was attacked by Japanese troops and had only Billy clubs to defend themselves. The idea came up to give the workers a way to protect themselves.

The plan came together when Admiral Nimitz got behind it.

But that didn’t mean Rummel wanted to be a Seabee.

“I was drafted,” Rummel said. “I asked for Navy duty. I got the Seabees.”

The Seabees were the Navy’s equivalent of the Army Engineers, Rummel said. The elderly veteran has nothing but praise for his Army counterparts.

“They were real good,” Rummel said.

The qualities that made the Seabees stand out was they did not have teachers and most had worked in construction for five to seven years before the war.

Rummel had the skill to be a machine operator and a truck driver and that made him stand out, he said.

He was once told to clear out a lowland channel where baby sharks were attacking the troops. He fashioned a backhoe to be flexible when it dug out the sand.

His work caught the eye of Admiral Nimitz who came over one time and complimented him on his efforts.

From Island X, Rummel traveled to Guam, which was key to getting the bombers to Japan. The planes traveled from Saipan to Guam and then to Japan and back, he said.

According to Wikipedia, B-29s were launched from both islands by the end of the war.

A yearbook of sorts captures the memories of the men who served on Island X, the first atoll the Allies recaptured from Japan. The book stands today as a testament to the work the Seabees did.

“We remade the airfield so we might get the B-24s off,” Rummel said of the light bombers used at the time.

Life in the military was no different that working at a civilian job, Rummel said.

“If you mind your P’s and Q’s and don’t try any funny stuff,” Rummel said. “It’s a good place to work and sleep.”