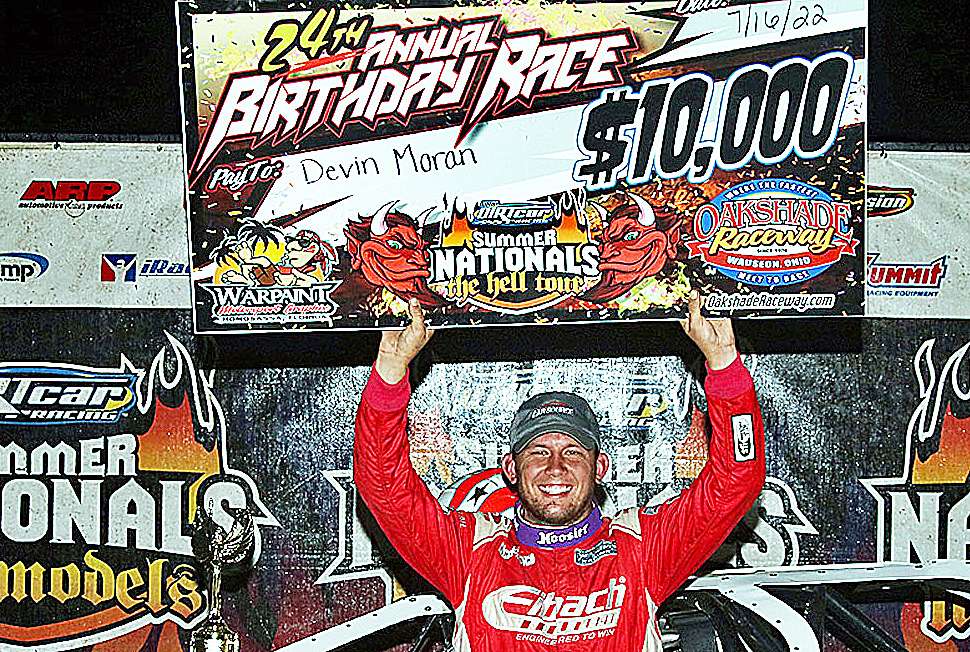 Moran took the lead from Colin Shipley on Lap 10 and never looked back, leading the final 31 circuits around Oakshade Raceway Saturday night en route to Victory Lane in the 24th running of the Birthday Race.

“To win the Birthday Race is pretty cool,” said Moran, of Dresden, OH. “I never get to come up here, but it’s a home-state track. To come out here and win is definitely a lot of fun.”

“The crowd and the fanbase here are pretty electric, and it’s a lot of fun to come race in front of these guys,” Moran said. “To win it with my dad is pretty badass.”

Moran took the green from third on the starting grid and wasted zero time in his charge to the front, getting around Payton Freeman for second on Lap 2 and setting his sights on leader Shipley, who was nearly two seconds ahead at one point.

When 16-year-old Shipley, of Weston, OH, reached lapped traffic and overshot Turns 1-2 on Lap 10, Moran was ready to pounce in the bottom lane and zoomed by to capture the top spot.

“I was just being patient and letting [Shipley] go as hard as he could,” Moran said. “I knew eventually, he was going to mess-up a little bit. When he did, I slid underneath him and tried to hold on from there.”

But his fight wasn’t done there. Moran encountered a heavy challenge from six-time Oakshade track champion Rusty Schlenk in the closing stages. Schlenk, of McClure, OH, worked his way up through the top-five after starting eighth and came to life in the second half.

He pressured Moran heavily after a restart with 13-to-go, then threw a big slide job at him to take the lead for one turn before Moran crossed him back over in Turn 4 to regain the spot.

Despite more pressure from the #91 in the final laps, Moran was able to hold on to score the $10,000 check and his fourth career Summer Nationals Feature win.

Schlenk held on for second while Bobby Pierce crossed in third after dropping as low as eighth at one point early on. Payton Freeman bagged his fifth top-five finish of the season with a fourth-place run, and defending track champion Devin Shiels rounded-out the top-five.

Oakshade Raceway returns to action Saturday, July 23, with another full night of racing action with Late Models, Sportsman, Dominator Super Stocks and Compacts. Gates open at 4 p.m., with hot laps at 6 and racing at 7.