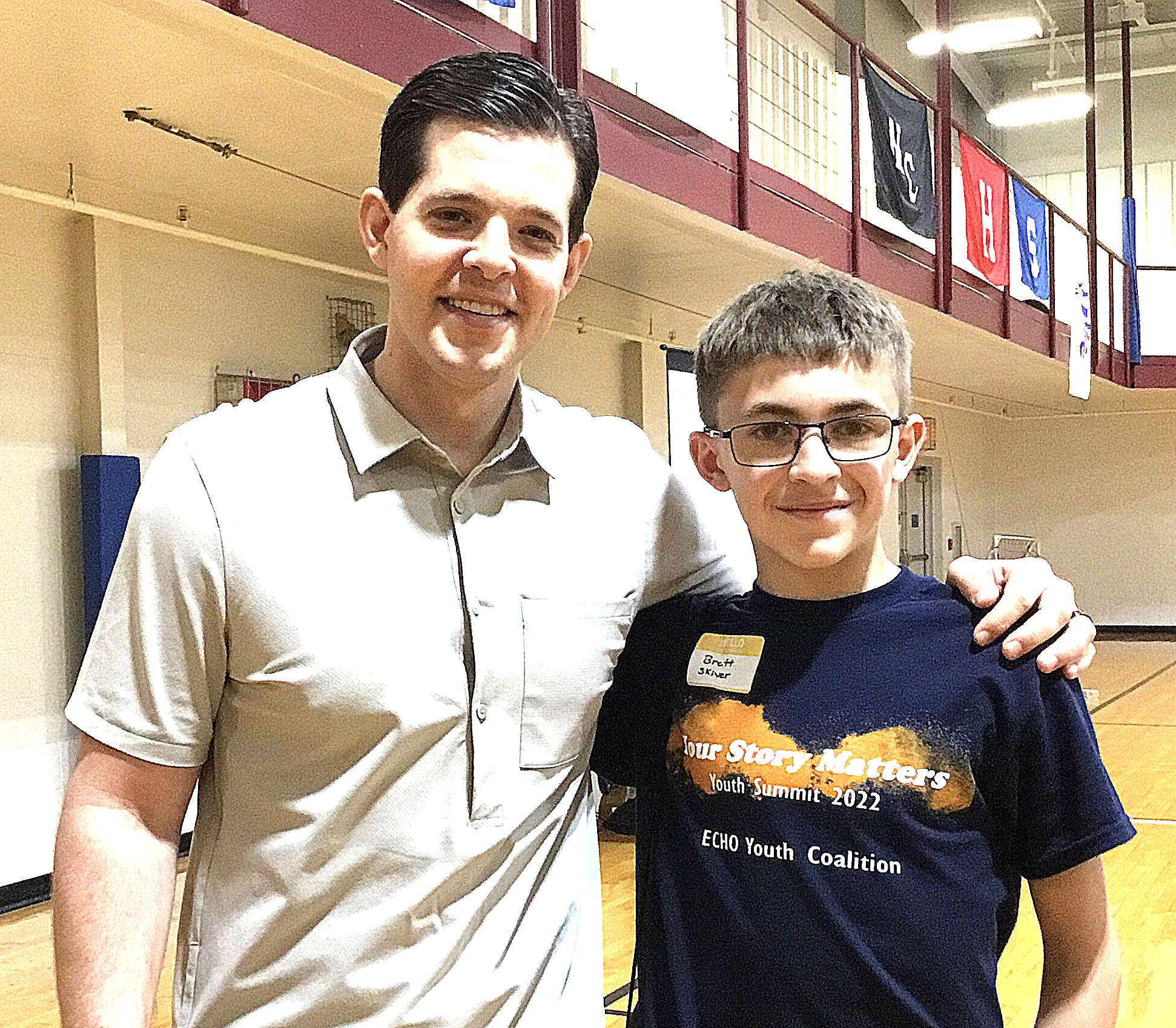 ONE ON ONE … Following his presentation to the students at the ECHO Coalition event at the YMCA on May 5, 2022, Stephen Hill welcomed students to come and speak with him one on one. Seventh grader Brett Skiver took the opportunity and when Hill said, “Hey, let’s get a picture!” Skiver agreed. (PHOTO BY REBECCA MILLER, STAFF)

ECHO, Educating Communities on Health Opportunities, is a substance abuse prevention coalition housed in the Health Department in Montpelier.

They hold events and give out information to promote healthy lifestyles free from substance use among the youth and adults of Williams County, Ohio.

“Students are susceptible to engaging in risky behaviors including experimenting with substances.” This Youth Summit was the kick off for the #WeAreFree Campaign which provides a positive opportunity for students to be motivated to make the choice to be substance free.

During the full day of activities, students from Bryan, Montpelier and Edon JH and HS learned about the dangers of substance misuse, the benefits of healthy living and connected with local resources available in their community.

The day included a one-hour presentation given by nationally known speaker, Stephen Hill of “Speak Sobriety.”

Hill is a young man who went so deep into drug and alcohol addiction that he almost didn’t make it out alive.

He shared his story from the beginning with no platitudes or cliches to make it sound easy. The room was silent as students and adults alike listened to every word.

Hill was straight forward and pulled no punches as he told of how he got started in the use of drugs and alcohol because he saw those he admired doing so…the popular kids involved in sports who thought it was fine, did so in front of younger kids who did not know better, giving them the impression that it was the norm.

He shared how his parents and brothers stood by him through it all, how he went in and out of rehabs, and how he hit rock bottom.

He has been sober for nine years now and his one desire was to help others not go through what he did. “Speak Sobriety” is his platform and can be found online and on Facebook. He has published a book, A Journey to Recovery: Speak Sobriety, which also shares his story.

The blurb online says, “Stephen Hill had everything going for him growing up: a loving family, lots of friends, and he excelled in school, especially sports.

Elevated to play on the Junior Varsity Lacrosse team in 8th grade, Stephen was introduced to drugs by older peers.”

Program Coordinator, Bethany Coutz, had a large crew who worked with her to set up the event at the YMCA and served the students all day, with the hope that this event will help sway someone to stay away from or get away from the use of drugs and alcohol, smoking and vaping.

Every student was given a shirt as well as many other items to encourage them in the right direction. They participated in an Open Gym time, with Four of a Kind Entertainment available with their fuzzy animal rides to enjoy, and Kahoot to play.

Youth led programming by Awareness Team and Youth in action was a huge part of the morning.

In the afternoon, following a delicious pizza lunch provided by Domino’s, which they ate picnic style on the floor, the students went into Break-out Sessions led by Stephen Hill, Sunshine Faunce, Ben Harris and Daniel Tinch. Busses loaded at 2:20 to return to their schools.

The goals of this event were that “Youth become advocates for change in their schools and communities; Youth connect with community organizations that may aid them in becoming ‘the change they wish to see’; and Youth are provided with educational and leadership opportunities that will encourage them to achieve.”