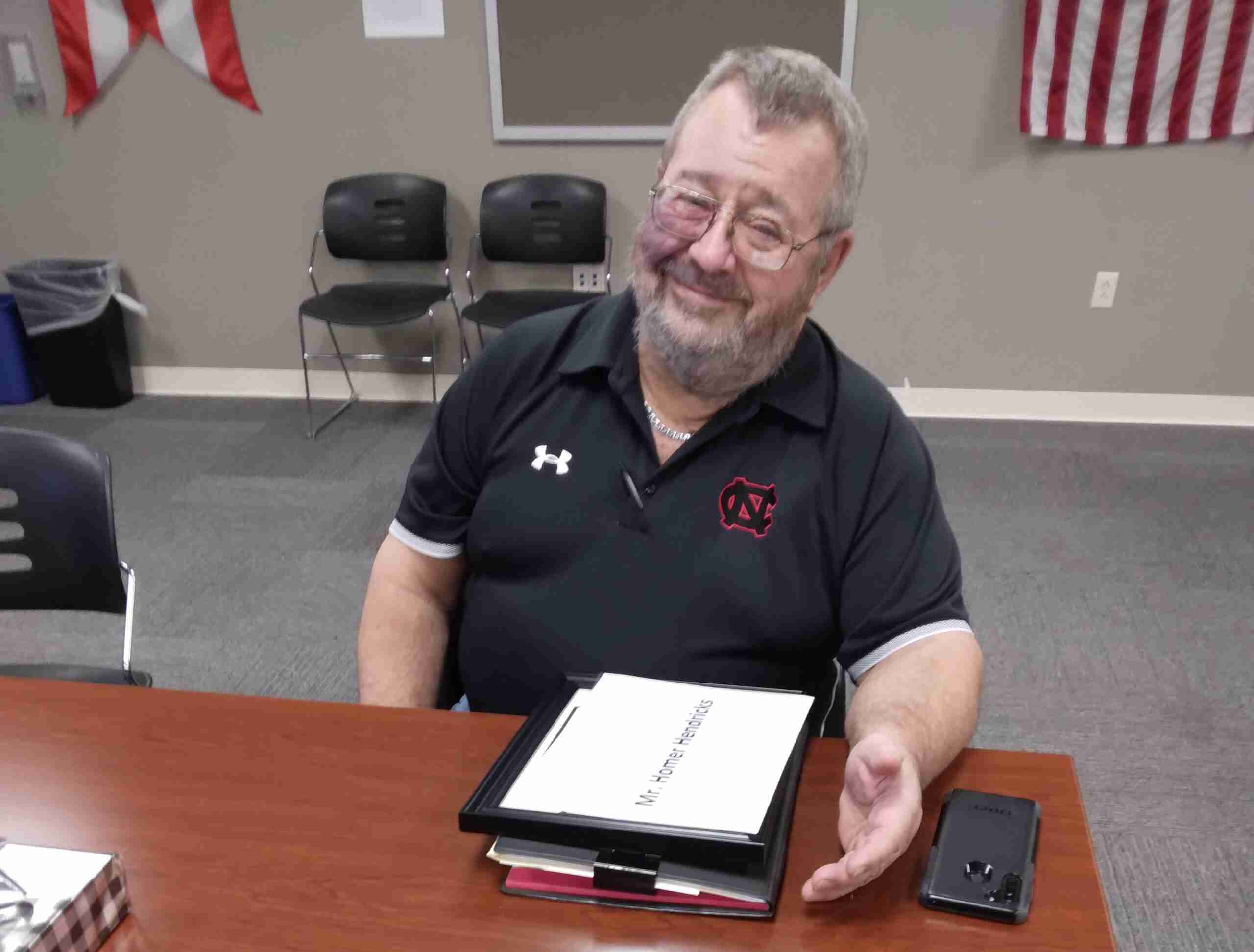 RETIREMENT … North Central School Board President Homer Hendricks is retiring, after serving on the school board for 24 years. (PHOTO BY DANIEL COOLEY, STAFF)

The December 14 North Central School Board meeting began with the call to order, followed by the Pledge of Allegiance.

That was followed by roll call. Board members present were Anthony Burnett, Homer Hendricks, Tim Livengood and Shane Martin. Leigh Boothman was absent.

Cafeteria Food Director Rob Taylor gave an update. While meals for students are free for now, middle and high school students can use a google account to order meals.

Taylor requests salad orders be made by 9:30 and meals, by 10:30. Taylor said that he may experiment in the spring, opening up orders for sixth graders, so that they can get ready for next year’s ordering.

Next, in Superintendent Hanak’s report, he began with stating that enrollment numbers are up slightly, to 606 students. Hanak then announced that the NwOESC and OSBA Board Member basics training will take place on February 16, 2022.

Involving the annual presentation of food and nutritional standards, Hanak stated that the district has fulfilled compliance with the state laws, regarding the above standards.

In Covid-19 updates, there have been 44 students and nine staff affected by Covid. There will be an early release reminder for December 21 and May 26, 2022, both at 1:00 p.m. In addition, there will be a January Organizational/regular meeting on January 10, at 6 p.m.

Thanks goes out to the Pioneer American Legion Post 307, for two donations of $4,000. The first goes to the NC Athletic Boosters. The other was divided evenly between the elementary and the middle/high school. In addition, in ensuring that no child goes hungry, a $200 donation was made.

Elementary principal Andy Morr than gave a report. There is a Book Fair currently going on at the school and there is a backpack program for meals for kids. On December 16, there will be Christmas program for K-third grade.

In regards to early dismissal on the 21st, kids will be watching a movie and fourth through sixth grades will go to Wauseon to watch a movie. Friday morning will involve the reading of a book by an adult.

Middle and High School Principal Marcia Rozevink then gave a report. On early dismissal day on the 21st, there will be a two hour time frame when students can sign up for activities, whether it be crafts, movies, or just peace and quiet.

Also, four FFA members served seniors and there will be a band and choir concert on Sunday.

Next, the board approved a resolution to approve the SB1 substitute for North Central Schools, for Marcia Geiser. That was followed by approval of Aaron Mullins as a Full-time substitute, for the remainder of the school year.

Next, a consent agenda, involving the NwOESC teacher and paraprofessional substitute list, for the 2021-22 school year, was approved.

Up next, Smeltzer discussed North Central’s track, which is in need of some repairs. Smeltzer said that three types of tracks were presented to him, which will be decided upon in the near future. He said the cost will be at least $100,000.

The meeting was then adjourned, by unanimous approval.