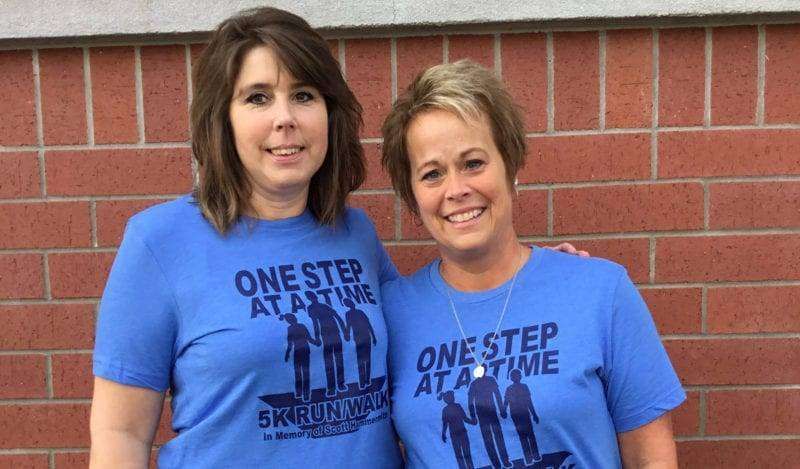 ONE STEP AT A TIME 5K … The event was led by founder Sherri Hammersmith, on the right. This was the 8th year since she started this event in memory of son Scott. BJ Horner, on the left, was the speaker this year who shared the story of her sad and horrifying encounter with suicide. Over 400 came out for the event and the ladies were pleased that they can offer this moment for them all to stand together. (PHOTO BY REBECCA MILLER, STAFF)

What a mix of emotions one feels as you observe or participate in a day dedicated to the memory of those who have succumbed to the horrors of suicide, to those who struggle with the thoughts of it and those who are survivors of attempted suicide. It has been said that “hurting people hurt people” but on this day, September 28, 2019, the hurting people were helping people. The purpose of this particular memory run is to raise awareness that there are many who struggle, many who hurt and that No One Is Alone.

In the midst of it all, even though the theme was a somber one, were hugs, smiles, laughter, reunions, families, babies in strollers, dogs, serious runners, volunteers at every spot they were needed and children who just didn’t run out of energy. No one was alone. The background music from the seventies blended into the crowd as they meandered back into the George M. Smart Athletic Center at Defiance College, where they had gathered to register before the race.

It was a brave step to put on a green one, but as this was a “No Judgement Day”, many wore them. At the event there were professionally trained people who took time to speak with them and to make sure they are ok and talking about it. Pro Medica had nurses there, volunteers from L.O.S.S., Local Outreach to Survivors of Suicide based at the Four County ADAMhs Board, and workers from Maumee Valley Guidance Center were present, ready to visit and listen.

Sherri Hammersmith, mother of Scott who took his life at the age of 16 in 2006, is the founder of this run. She shared in an interview that they were all shocked and devastated when this bomb hit their family. “Scott was very athletic and very popular,” she said. “We thought everything was great, but we didn’t know that he had a hidden struggle. He was a perfectionist. Straight A’s, didn’t drink or do drugs, but nothing was ever good in his eyes that he did.”

“He was the child every mother wishes they could have, but he had that hidden struggle. In his journal, he shared about it and even wrote us a message that if we were reading it, then he was sorry but this was what he had decided to do. It was a nice Spring day…April 6, 2006. He went to school and had a Baseball game scheduled after school. It was close to Easter and since we were going to have a whole weekend of baseball games, my daughter and I went shopping and his dad was at his other brother’s game. When we came home I found him in his bedroom.”

Steven was 14 and Sarah was 10. Sherri and Fred struggle with wishing they had known, with feeling like somehow they weren’t there for their son, with much pain. “After four years of trying to deal with the pain and feeling so alone, I just had to do something! The emptiness makes you feel so alone. I know I can’t stop suicide, but I can help raise awareness to prevent it and to let people know they are not alone,” Sherri said.

This was the 8th Annual One Step at a Time 5k Run/Walk. Presenting sponsors are Sims Metal Management, Clemens Mobile Welding, General Motors, Defiance Area Foundation, and Meijer. “One Step at a Time, in memory of Scott Hammersmith, remembers those lost to suicide, but also gives hope to the survivors and those struggling with depression,” is the wording they chose for this run. In a press release, they said, “Now, at over 400 participants in the last few years, the race has continued to do just that, but has also become a space for loved ones, family, and friends to gather – to speak for those no longer here and for those unable to do so.”

When Sherri speaks to students at schools she tells them how important it is to say something. Whether about yourself or a friend, it is better to speak up and get help, than to let it go when you have feelings or thoughts about killing yourself, or that things just aren’t quite right. “The biggest thing is that he wrote a journal and we didn’t know until after he died. He had told three of his friends that ‘something is wrong and my head doesn’t feel right,’ and none of them knew to tell someone.”

“They thought he was a strong person and “Scott had it all” so they didn’t speak up and tell anyone what Scott had said to them.” She stresses the importance of knowing You Are Not Alone. “It is so important to have a real conversation with your loved ones, to act upon things that may seem ‘off’. Be bold, speak up, be the voice for those struggling. Their life is so important,” urges Hammersmith.

Each year the run has been held at Defiance college in September because that is Suicide Prevention Month. Every year she questions whether she should keep doing it or not and each year she gets confirmations that it is needed by all those who attend. “One year a young girl told me Thank you and I said to her, Thank you for coming. She said, ‘No. I am thanking you. Because of you I know there are others and there is help and hope.’ Another year someone sent an anonymous donation and on the back of the envelope it said ‘I survived.’

“So we keep doing this,” She said with a soft smile. “There is always tomorrow.”The shirts for the race say “One Step at a Time” and Sherri said that she named it that because that is how she does it. “Good things have come of this. Positive things can happen out of tragedy. Things change and you start thinking differently. The walk is part of my healing process. I may never be healed, but it helps. It helps to be in a room full of other people who understand.”

The over 400 participants were given the options of running or walking the 5K, or taking the one mile Memory Walk, which went past the signs of names and pictures of loved ones who are gone, as well as past the shoes lined up along the sidewalk as a silent, sad reminder that real people struggled and didn’t make it. Donuts, coffee, water, Reeses candy bars and bananas were there for the taking and after the race the bananas disappeared quickly, replacing much needed potassium for the runners. Many came in and kept walking around the indoor track, to “walk it off.”

A little after 10 a.m. all the participants gathered in the Athletic Center to hear his year’s featured speaker, BJ Horner, share for ten minutes before the Awards were given out. Horner is an Ohio Certified Prevention Specialist at Maumee Valley Guidance Center. She shared her personal story with suicide and why she does what she does. Suicide touched her in a very personal way when the young man that she loved shot himself in the chest right in front of her. She held him as he died, while they waited for help to come. “He kept saying ‘Help me’ and I couldn’t help him.” Many were crying as she spoke…crying for her, crying for themselves and their own losses, crying because of this horrible thing called suicide.

As Horner finished and thanked them for letting her share her story, Jennifer Johnson from Noblesville, Indiana sang Rescue by Lauren Daigle. Her voice was professional sounding and the song washed over the broken hearts in the room. Johnson is mother-in-law to Sherri and Fred’s other son, Steven, and she has come to participate in the 5K for the past five or six years.

The morning ended with a huge amount of awards. Sherri and her Race Organizer, Jessica Myers handed out drawstring bags full of candy to the children who won and thermal totes with an Amazon Gift Card to the adults. As everyone gathered their belongings and began to leave, the room was filled with people taking selfies, group pictures, lots of hugs and “See you next year.”