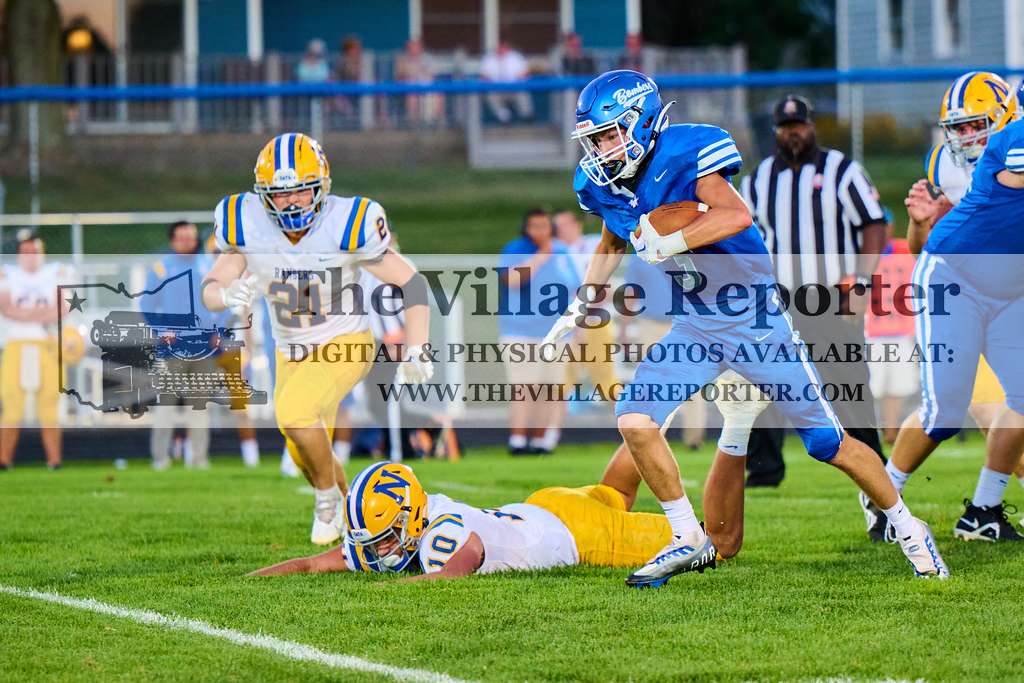 “I think I’m getting better each week, getting more comfortable with our wide receivers,” Sapp said. “The (offensive line) has really stepped up, too, giving me more time to throw.”

“(And on the yardage gained rushing), when I can, I just go out and get what I can get. Being able to beat Northwood for the first time feels like a million bucks.”

Edon jumped out to a 20-0 lead after one quarter, setting the tone for the rest of the game.

“The guys came out to play and defensively and in the first quarter we really shut them down,” said Edon head coach Bob Olwin.

“But then in the second quarter they scored twice on us, which was very frustrating. But in the second half, the guys came out and made plays and we were able to finish.”

Caden Nester, who finished with a game high 111 yards receiving, started things off with a one-yard TD reception from Sapp.

Northwood then got on the board after Mason Smith’s 25-yard TD pass to Brandon Gomez. Zaegan Byington then ran in the two-point conversion and Edon led 20-8.

Edon answered Northwood’s score with a three-yard TD run by Wade Parrish to put Edon up 27-8.

However, after recovering an Edon fumble by Sapp at its own 47-yard line, Northwood scored a touchdown with just 35 seconds left in the first half on Montonio Baker’s 12-yard TD scamper. That closed Edon’s lead to 27-14 at halftime.

Northwood threatened to cut Edon’s lead to a single touchdown when they took the second half kickoff and quickly drove to a first and goal at the Edon nine-yard line.

“When you play hard, good things happen and we were fortunate to come up with the recovery,” Olwin said.

Edon took full advantage, driving 94 yards in seven plays to go up 34-14. A key play in the scoring drive came on Radabaugh’s 35-yard reception on third down and 15 yards to go.

With the ball at the Northwood 39-yard line after Radabaugh’s reception, Sapp then hit Nester with a 39-yard TD pass.

After both teams punted on their next series, Northwood then drove to a first down at the Edon 21-yard line, but a 15-yard penalty killed the momentum.

Facing a fourth down and 32 yards to go after Smith suffered a five-yard loss, Smith nearly gained all the yardage back but was six yards short after a 26-yard gain. Smith finished with 60 yards rushing and 127 yards passing but was also sacked four times.

“Their quarterback played really well, but I was able to step up and get him for losses a few times,” said Edon defensive tackle Parker Kelley.

Edon then moved to a first down on the Northwood 49. Though a holding penalty forced the Bombers to punt, Edon had run off enough of the clock to put the game on ice.

Northwood was able to get three first downs, but the game ended with Northwood on the Edon 46-yard line.