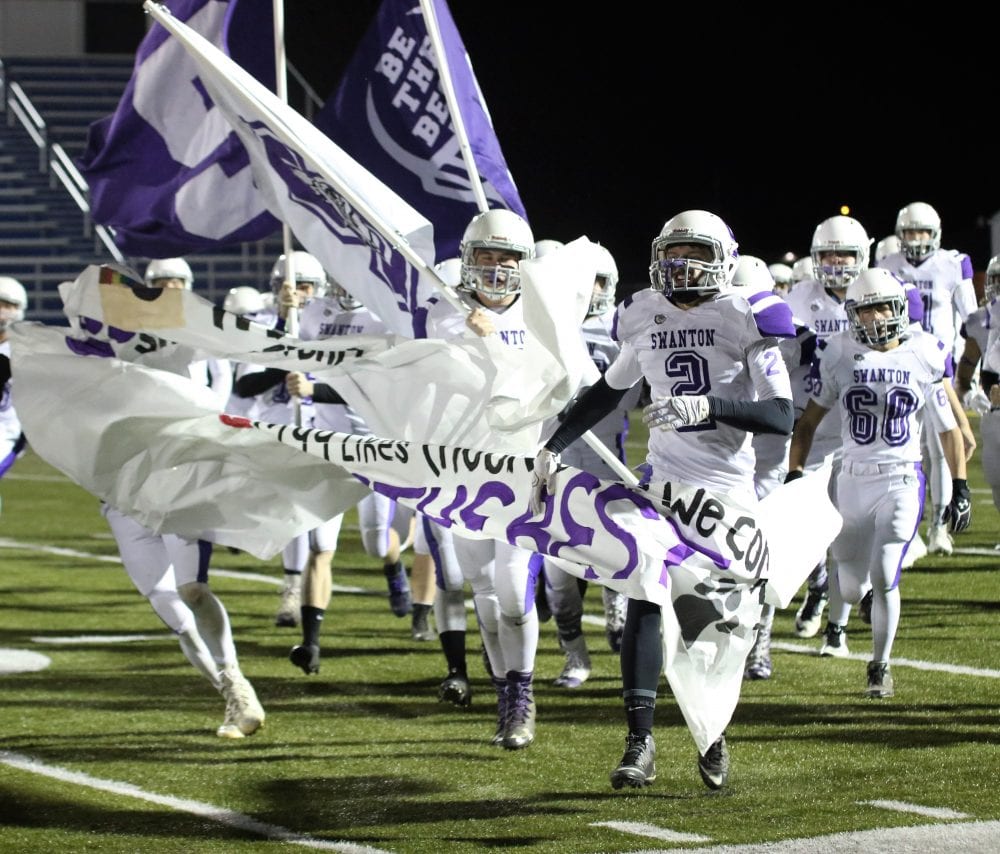 A tremendous season that saw the Swanton Football Bulldogs reach the second round of the playoffs for the second consecutive year ended with a heart-breaking 28-21 loss to the top-seeded Creston Norwayne Bobcats at Clyde High School on Saturday night.

The irrepressible Bulldogs, who fell behind by 14 points on three separate occasions, rallied to pull within seven each time and had the potential tying score literally in their hands with just seconds left on the clock, but were stopped on a great play by a Bobcat defender.

Facing a fourth down and five at the Norwayne 24-yard line with 32 seconds remaining in the game, Swanton quarterback Marek Spiess threw a pass to his younger brother, Brennan, in the back of the end zone. Brennan and Norwayne defensive back Zach Steiner went high for the ball with Spiess grabbing it in mid-air. On the way down, however, Steiner, a state wrestling champion and Ohio State University commit, was able to wrestle the ball from Spiess as the two collapsed to the ground.

There was a brief pause before one of the officials, making sure Steiner was in possession of the ball, signaled towards the other end zone, indicating a turnover. Out of timeouts, the Bulldogs could only stand and watch as Bobcat quarterback Elmer Zollinger took the final snap and kneeled down to end the game.

“I thought Marek threw a great ball. I thought Brennan went up and got it. I thought he had the ball when he came down and when he was down I thought the guy took the ball from him,” said Swanton Head Coach Mike Vicars describing how he saw the play. “And it’s just very hard to argue that with an official.”

The Bulldogs took the opening kickoff, were unable to advance the ball very far and punted, pinning the Bobcats at their own one-yard line. From there, Norwayne mounted a 99-yard touchdown drive behind their dual threat quarterback Zollinger who crossed the goal line from two yards out, giving his team a 7-0 lead with the point after.

Following another Swanton punt, the Bobcat offense drove down the field again with Zollinger, mixing in runs and passes, finally finding the end zone on an eight-yard scamper. Rebekah Graf booted the extra point and Norwayne led 14-0 with 10:27 to go in the first half.

On their third possession, the Bulldogs offense, powered by their trademark running game, began to move down field and into Bobcat territory. From the 32-yardline, Tim Rankin took a hand-off, ran through a gaping hole on the right side then cut across the field to wide open spaces and into the end zone for Swanton’s first score. Nick Kobak tacked on the extra point and the Bulldogs were back in the game, 14-7, with 5:57 left until halftime.

Defensively, however, Swanton still did not have an answer for the Norwayne offense. The Bobcats came right back down the field and scored when Zollinger hit Brevin Harris for a 31-yard touchdown barely two minutes after the Swanton score. Soon after the 14-point spread was restored, both teams headed for the locker room.

The second half was a very different story as Coach Vicars and his staff made the necessary adjustments to virtually shut down the high-powered Bobcat offense…except for one play. As it turned out, that one play proved to be the difference.

Late in the third quarter, Cameron Hitchen took it into the end zone from a yard out and, with the Kobak PAT, the Bulldogs were back within seven points at 21-14 with 2:44 still to go in the third. Momentum was now on the Swanton sideline. Unfortunately, it did not stay there very long. After returning the kickoff to the 21-yard line, Zollinger took the snap, ran around the left side and down the sideline for 79 yards to the house, putting his team back up by 14 points, 28-14 with just 12 more seconds gone from the clock. It would be the only points Norwayne would score in the second half but it would be enough.

The Bulldogs, to their credit, kept fighting and scored again when Marek Spiess found Jonny Shanks in the corner of the end zone for a seven-yard touchdown to pull within 28-21 with 6:43 left in the contest.

Needing to get the ball back, Swanton forced the Bobcats to punt when a blitzing Gunnar Oakes dropped Zollinger in the backfield on a third and one situation. The Bulldogs started their last drive at their own 32-yard line with 4:28 to go and took it to the Norwayne 24 where the game essentially ended with that final pass.

“It’s hard because this is a family that you’ve built,” said Coach Vicars commenting on the difficult loss after the game. “We’ve asked our kids to be super committed and you just don’t want to see those 12 kids (seniors) walk away. These seniors were blood rooted in this team.

They were so much fun to be with. Monday is going to be really hard.”

The season may have ended on somewhat of a sour note, especially with the disputed official’s call but, once the pain subsides, the players, coaches and fans will have a lifetime of memories to enjoy. And it will not be long before the returning players and the incoming freshman will be putting on the pads, stepping onto the field and listening to Coach Vicars demanding that they “Be the best!”