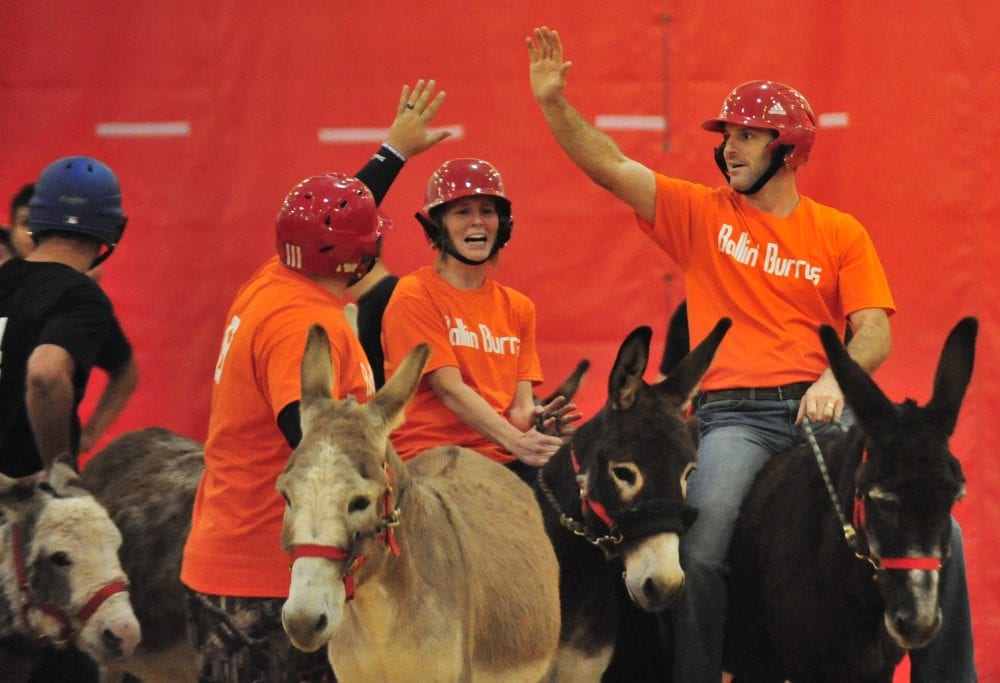 On Friday, November 11, 2016, many Americans rightfully paid tribute to our Veterans. This was also the case at Wauseon High School that evening as all veterans in attendance we asked to rise. The nearly packed gymnasium responded with a roaring round of applause. However, that wasn’t the only special event taking place. Also that night the Wauseon FFA Alumni hosted their 2nd Annual FFA Donkey Basketball Fundraiser. Proceeds from the event benefit the Wauseon FFA Chapter in several different ways. The funds raised are utilized for scholarships, as well as providing money that is used by the Wauseon FFA to help defray the costs of attending both the State and National FFA Conventions. The FFA Alumni Association raises the funds through admission for the donkey basketball game, as well as providing concessions which includes Brookview Farms sausage sandwiches.

Game one pitted the “Ballin Burros”, which was composed of Wauseon High School Staff, against the students from Wauseon High School a.k.a. “Yee Haws”. The Burros took game one 7-6 on a buzzer beating three from half court by Mike Colon to advance to the championship.

The second tilt featured the Wauseon Fire Department and the “Donkey Dynasty” which included Wauseon School Staff. The Dynasty won that contest in overtime by a score of 4-2. Intermission gave those in attendance ages 12 and under a chance for a free donkey ride. Yee Haw regrouped during the break to down the fire fighters 6-2 in the consolation game. The championship matched the high school staff against the staff from the other district schools. Rachel Smith and her donkey dominated as she scored all 12 of her team’s points en route to a 12-6 championship victory!

A lot of laughter was shared by all, and a few encountered bruises as well courtesy of their energetic donkeys! Heather Clausen of the FFA Alumni Association summed up the program and the event with the following: “The Wauseon FFA Alumni Association is proud of the accomplishments of the program and gladly supports their students in their endeavors. They are also very thankful for all the support provided by those who attended the donkey basketball game”.